Despite my modest list of goals for the week, I got little done.  I published my YOP goals of the week on Sunday.  Early in the evening on Tuesday, Chris’s mother told us her brother passed away and the funeral was on Friday.  We flew up to New Jersey late Thursday night and came home late Sunday night.  This morning (Tuesday), I’m flying to San Diego to attend The Knitting Guild Association Annual Conference and I won’t be home until Sunday night.  When I found out about the funeral, I immediately developed a long list of things to do in the two days before we left.  I knew that most of what I needed to do before TKGA had to be done before we left for NJ!

Chris’s Uncle Angelo was 85 years old.  His birthday was September 4, one day after Chris’s, so when Chris was growing up, the family often celebrated the two birthdays in one party.  One of the pictures on display at the funeral home showed Chris and Angelo cutting a birthday cake together.  More than 20 years ago, Angelo suffered a stroke that left him paralyzed on his right side.  Despite that, he lived on his own, mostly taking care of himself.  His sisters did his grocery shopping, but he prepared his own meals.  Around the time Chris and I first met 15 years ago, Angelo started doing 3D puzzles.  He completed more than 20 of these puzzles, using only his left hand.  Some of the puzzles were on display at the funeral home:

Angelo served in the Army (I believe during World War II, but I’m not sure), so he had military honors at the funeral.  I always find this ceremony — taps, folding the flag, and presentation of the flag to the family — touching. 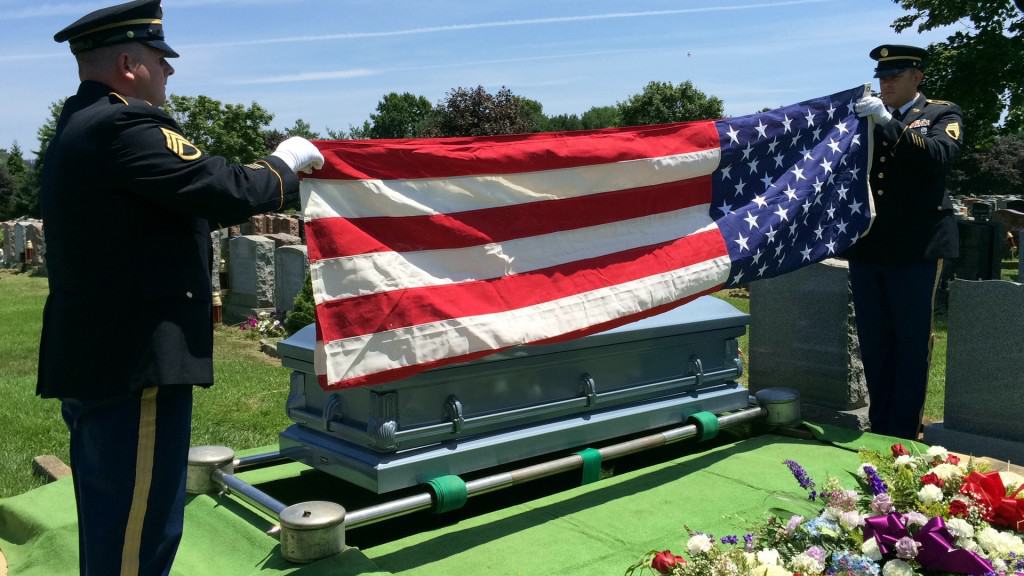 Now that I’ve lowered your expectations re: my completed goals, here’s a reminder of the goals I set last week:

I did not finish the Miranda Shawl.  I did knit several rows after Sunday, but I didn’t take a picture of it to include here.  The body of the shawl is all stockinette, but it is short rows.  While it’s not difficult and there is a regular pattern to the number of stitches in each row, I’m finding that I do have to focus to keep track of which row is next.  Once I learned about the funeral, I put this project on hold.  I did put it in my bag to bring to TKGA.

I finished all the homework swatches for TKGA swatches.  I knit a dozen of them before we left for NJ, and brought the rest with me to NJ.  Since each swatch is small, they made for excellent travel knitting.  I blocked them yesterday. 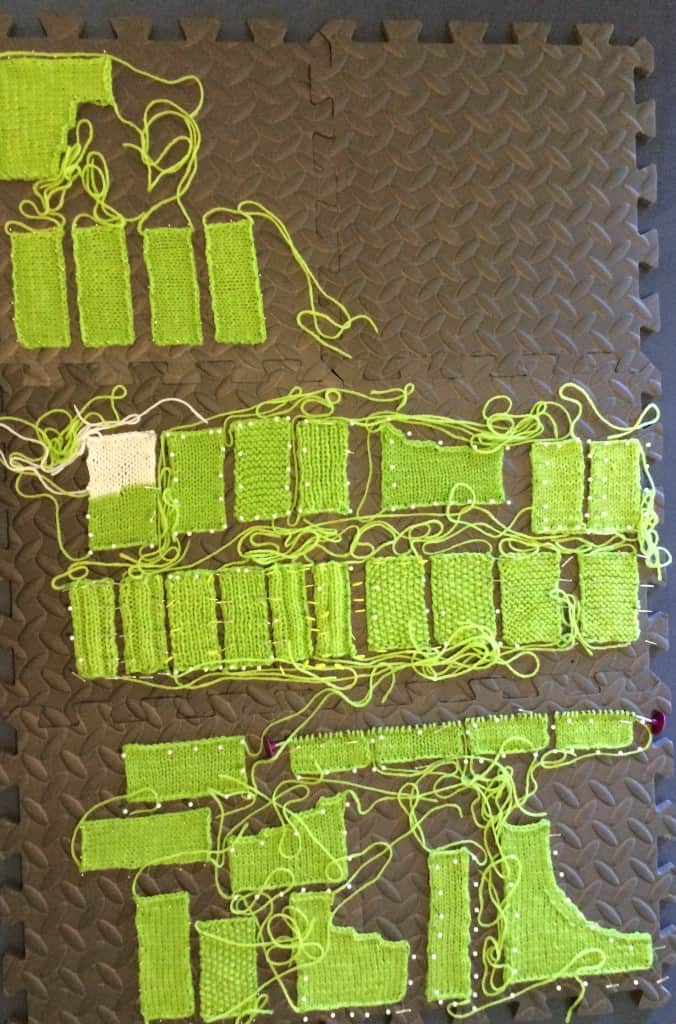 All but one of those swatches is for the two-day Finishing class with Arenda Holladay!

As of last Sunday, I had completed 4 of the 17 swatches for the Master Hand Knitting Level 1.  I knit the 5th swatch and blocked the 5 finished swatches before we left for NJ.  After blocking, I found an error in one of them so had to reknit that one.  I also didn’t like the fabric I created on any of the swatches.  I knit them all with Cascade 220 on US size 8 needles.  I decided to reknit all of them with US size 7 needles.  Before we left for NJ, I did research and wrote answers to several questions related to swatches I hadn’t previously knit.  I brought the yarn and needles to NJ with me, and I’ve finished knitting 12 of the 17 swatches on size 7.  I don’t have a picture for you because they aren’t blocked.  I actually packed blocking mats and plan to block them in my hotel room tonight so I can bring the swatches for review during Masters Day tomorrow!  I also plan to knit three more swatches on the plane

Before we left for NJ, I finished spinning 4 of the 10 colors in Three Feet of Sheep.  Obviously I won’t get any more spinning done during the Tour de Fleece, since I’ll be away for the rest of the Tour.  I do hope to finish spinning the Three Feet of Sheep by the end of the month, however, so I’ll be working on it after I get back.

As you’ve probably guessed, I didn’t even look at any of the projects I had on deck.

I am bringing my iPad with me and I hope to blog from TKGA.  My next YOP post will probably be on Monday, as I won’t be home until late Sunday night.