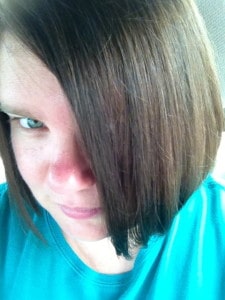 My name is Karen Greene and I live in Central Florida, a bit north of Orlando.  I live with Chris, my husband of 12 years, and our three cats: Puck, Pepper, and Tiger.  We do not have any children.

The first time I ever held knitting needles, I was 8 years old.  My grandmother and her sister were trying to keep my sister and I occupied so they handed us knitting needles with some stitches on them, and showed us how to knit.  I wish I could say I’ve been knitting ever since, but that is not the case.  I did not knit again until I was 19, and I had to reteach myself out of a book.  I’ve been knitting off and on ever since — and that’s more than 20 years ago now.

I’m an attorney by training, but not currently practicing due to the needs of our family (details in episode 1 of the video podcast, the very first post on this blog in October 2013).  This means I have more time to craft than I have ever had before, and pretty much all my crafting time is devoted to yarn crafting.  Mostly knitting, but I’m learning how to crochet, spin, weave, and dye.

Since I’ve had more crafting time, I’m learning new techniques — 2013 saw my first ever shawl, my first ever all laceweight project, my first ever socks, and my first ever crochet.  In 2014, I learned to spin and weave.  I originally launched this website as a home for a podcast, but I quickly stopped the podcast and eventually decided to transform the site into a blog.  I do still want to do a podcast, and will relaunch it at some point in the future.  I hope you might learn something from my experiences, and I hope you will share your crafting journey so I, and other readers, might learn something from you.

About the Blog’s Name 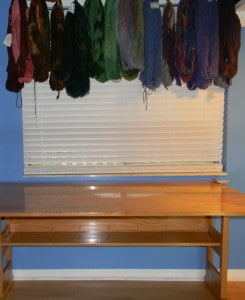 I have a curtain that is made from yarn.  Several years ago, my local yarn store had yarn hanging in the window like this, and I fell in love.  I dragged my husband down to the store so he could see it and figure out how I could have the same thing.  He came up with an easy solution — coat hooks screwed into a board which was then screwed into the wall above the window.  “Through the Yarny Curtain” is an invitation to peek through this literal curtain and into my life.  Mostly, I write about my crafting life, but the rest of my life inevitably makes cameo appearances in my posts!

“Through the Yarny Curtain” is also an oblique Alice in Wonderland reference.  When Alice slides down that rabbit hole or through the looking glass, she enters a world that is unlike the one she used to inhabit.  She gets deeper and deeper into the world, and it becomes more detailed and convoluted with every step.  Fiber has that same inexorable pull, especially once you are connected to the rest of the fiber community.  Perhaps, like me, you start out by knitting or crocheting.  Perhaps, like me, you spend many years as a solitary crafter, getting your yarn at the big box craft stores and knowing no other fiber crafters.  Then one day, you run into another fiber crafter at school or work or church or in the yarn aisle at your local big box craft store.  That fiber crafter introduces you to another, you find Ravelry, you Google knitting blogs and find a plethora of them with their links to Ravelry and indie dyers, and you never look back.  You learn to knit or crochet (whichever one you weren’t already doing), then to spin, then to weave, and along the way you dabble with dyeing yarn.  You acquire a stash of yarn that will last longer than your lifetime.  When your hairdresser comments that having a floor loom in your dining room isn’t the usual way of the world, you are kind of stunned because in the world you live in nobody bats an eye.