I finished the Begonia Swirl Shawl before the July 13, 2014 deadline for completing Order of the Phoenix Missions!!  Unfortunately, when I submitted my B.R.O.O.M. to propose my Mission, I specifically said that I would be completing a shawl of at least 800 yards.  I didn’t think this would be a problem as the pattern said it would take 822 yards.  I ended up using less than 800 yards, so my shawl couldn’t count for full points, even though it was done by the deadline.  I turned it in for partial points anyway. 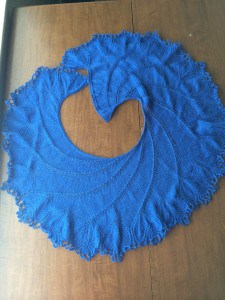 When I travel, I like to buy a skein of yarn that is related to the locale so that when I knit something with that yarn, I remember that place.  I bought the Mirrorball at Nomad Yarns booth at The Fiber Event in Greencastle, Indiana this past April.  I asked if they carried any yarns by local indie dyers or spun from locally raised animals.  They suggested the Mirrorball because it is a commercially produced yarn by a fairly new yarn company (founded 2012) located in the Indianapolis, Indiana area.  I liked the yarn a lot.  It was not at all splitty, and quite easy to knit.  I love the little bit of sparkle in it!  There is a slight discrepancy in the yardage listed on the Good for Ewe website and Ravelry.  The website lists the yardage as 796 yards; Ravelry lists it as 749 yards.  I tried to determine yardage myself after I finished the shawl, by weighing the remaining skein and then rewinding it on my ball winder, passing it through my yardage counter as it was wound.  Unfortunately, my yardage counter does not pick up lace yarn very well.  This is a problem I have had before, and I need to do some research to find one that will work for lace.

I enjoyed this pattern also.  I expected it to be more difficult than it was.  I expected it to be difficult because I was knitting it from the written instructions rather than the charts, because the grid on the chars was so small.  But the written instructions look complicated — some rows were 4 lines long.  I thought I would never be able to recognize or memorize the repeats, but I was wrong.  It was was to see what was happening with the stockinette section.  The lace was harder, but after three repeats on a row, I was able to knit the rest of the row without looking at the pattern. 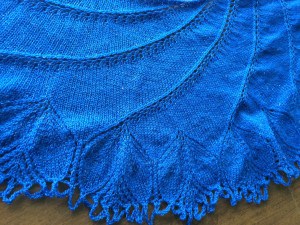 I recently acquired a bluetooth remote shutter so that I can take iPhone photos when the phone is across the room from me.  I have looked at such shutters in the past, but every one I saw required you to use a dedicated app with the shutter.  I wanted one that would work with the native iPhone photo app as well as with the many phoneography apps that I have downloaded.  A few weeks ago, I came across the Muku Shuttr

, which looked like exactly the thing I was waiting for, so I ordered it.  The main reason I wanted one was so I could take selfies with my knitted objects, but they wouldn’t look like selfies.  This is the first time I had the opportunity to use it. 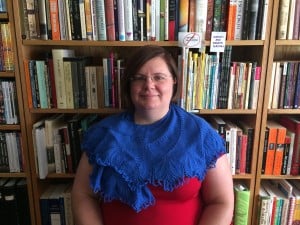 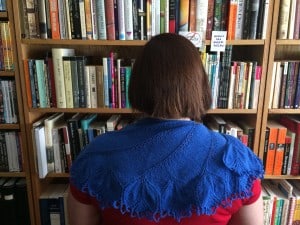 Worked like a charm!  I was only about 3 feet from the camera for this picture.  I did take a couple of pictures with the camera on the other side of the room, about 8 feet away, but that was too far away to be a good picture of the shawl.  I had a small learning curve, with understanding how hard and long to click the button.  The first time, I had not pushed the button hard enough so got no picture.  A couple times after that, I clicked too long, resulting in too multiple pictures.  I also discovered that if I held the shutter totally encased in my hand, I wasn’t able to use it.  This makes sense, but means that if your hands are visible in the picture, you have to think about how to take the picture without the shutter showing.  I am looking forward to taking more selfies now!