I am a day late with my weekly status report!  In addition to out-of-town guests at my house from Sunday through Wednesday, I was dealing with Pepper’s health emergency.  She’s going to be okay, but it took three visits to the vet in as many days.  As a result of the guest and the cat, I did no fiber crafting at all for the past few days.  I was making progress before that, though.

On Sunday, I did a lot of housework, then sat down to execute the nuclear option on my Begonia Swirl Shawl (see my Lifelines blog post).  I was just about finished picking up all the stitches when, out of the corner of my eye, I saw Pepper walk by.  She seemed to be walking funny, so I stopped picking up stitches and followed her.  Her whole back end appeared to be waving back and forth as she walked and I wasn’t sure if she was actually using her back legs to walk or not.  It turned out that she was, but her back end was dropping down much lower than usual.

Pepper has not walked properly for four or five years.  She is nearly 18 years old and she has arthritis in the knees on both of her back legs.  Despite the arthritis, she gets around just fine, jumping and walking.  She can’t jump as high as she did when she was younger, but she gets most places she wants to go anyway.  Her walk on Sunday was qualitatively different and more impeded than her usual walk.  She is a fearless cat, who still makes leaps that I don’t think she is physically able to make.  I thought perhaps she had misjudged a move and injured herself.  Or that she had a stroke (she also has high blood pressure, for which she receives medication).  Off to the emergency veterinary clinic we went, with a call to our out of town guests, letting them know we might not be home when they arrived at our house.

The emergency vet told us that when a cat walks on their hocks, like Pepper was doing, it is usually caused by a metabolic issue.  They ran an electrolyte panel and the values all fell in the normal range but since this was the emergency vet rather than her regular vet, they did not have her last blood results to compare to see if the values had changed.  Nevertheless, the blood results meant that there was no life-threatening crisis, so we went home with some pain meds.  The emergency vet thought the problem was probably pain.

When we got her home, she went straight to the water dish, located a half-step down in our sunken family room.  When she hopped down the step, her back end collapsed under her.  Since she had pain meds in her, I didn’t think pain was the problem.  It looked like she couldn’t control her legs.  We kept Pepper in my home office overnight, so that she would be isolated from our other two cats and so she could have her own litter box.  Our regular litter boxes are in the garage, which would require her to go through a cat door and down a full step.  It was obvious that she was not capable of doing that at the moment.

I called the regular vet first thing Monday morning.  They gave us an 11:30 am appointment.  I ended up leaving her for evaluation.  The vet ran a full blood test, took some x-rays to rule out physical injury, and observed her walk.  Diagnosis: potassium deficiency and, perhaps, increased arthritis.  Walking on the hocks is a definite sign of potassium deficiency in cats.  They gave us a potassium supplement and anti-inflammatory medication.  She got the first dose of potassium on Monday night.

On Tuesday morning, Pepper looked a little better.  She managed to scratch her ear with her hind leg, an action she could not possibly have taken over the previous couple days.  Her litter box usage was better.  On Sunday and Monday, she was not able to hold herself erect to use the litter box.  She lay on her side on top of the box and moved her legs a little so they weren’t in the way.  By some miracle, she did not pee on herself.  On Tuesday morning, she sat on top of the litter box.  She did not hold herself up off the litter, but she was sitting normally, not laying on her side.  She got her second dose of potassium supplement on Tuesday morning.

Since Chris and I both needed to be out of the house on Tuesday, I brought her to the vet to be boarded and observed for the day.  While she seemed to be much better, I did not feel she was well enough to be alone. I picked her up around 4:30 pm and brought her home.  She was much improved.  Her walk was almost back to what it was before this incident, she was able to hold herself a couple inches above the litter when using the box (though she collapsed a little right after she finished), and she was meowing to be allowed out of the office into the rest of the house.

She’s now back to just about her normal self.  She was already scheduled for her semi-annual vet visit on July 17, so we will follow-up with the vet at that time.  Until then, we are keeping her in my office at night and when we are not home, mostly to keep her away from the other two cats and their rough housing ways.

Pepper remains a work in progress, but she is so much better than she was!

I have not made any progress on my shawl since picking up all the stitches last Sunday.  After ripping back stitches, I am back to being about 60% done.  In order to meet the Mission deadline, it needs to be completed by Sunday, July 13.  I’m worried about my ability to make that deadline!  I am still going to try.

I finished spinning the Psalm 23 fiber and started plying it with the pin-drafted wool. 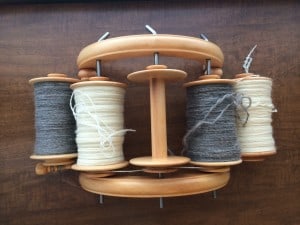 I have done very little plying as the singles keep breaking.

I am plying using my tensioned lazy Kate, so I think the tension may be too high on it.  It is also possible that the pin-drafted wool is under spun.  I am going to respin that wool, which I expect to be able to do quickly, before I try to ply any more.

And that’s all for this week.  All the excitement with guest plus cat means I did not start anything else!  Hopefully, the week to come will be more craftually productive!