I was in San Diego for The TKGA Conference from Tuesday, July 21 through Sunday, July 26.  I intended to blog while I was there, but I was so busy enjoying myself that I didn’t have time.  I had a truly spectacular time, and was sorry to see it end.  This week, I’ll write a series of blog posts about the event.  I hope you decide to come next year; the Conference will be held in Charleston, SC, a mere 5 hour drive from my house.  I’ve already put it in my calendar!

The main part of the Conference ran Thursday to Saturday.  Wednesday was a one-day pre-conference Master’s Day, with different tracks for each TKGA Master Hand Knitter Levels and a track for Level 3 graduates.   Tuesday and Sunday were travel days.  On Tuesday, my flight left Orlando at 10:40 am and arrived in San Diego at 12:10 pm local time.  The flight was uneventful.  I read the whole way — The Age of Homespun, which is fascinating and which I will review on this blog once I finish it.

I took Super Shuttle to the airport and checked into the hotel.  There was a long line to check in, and most of the people in the line appeared to be fiber crafters: 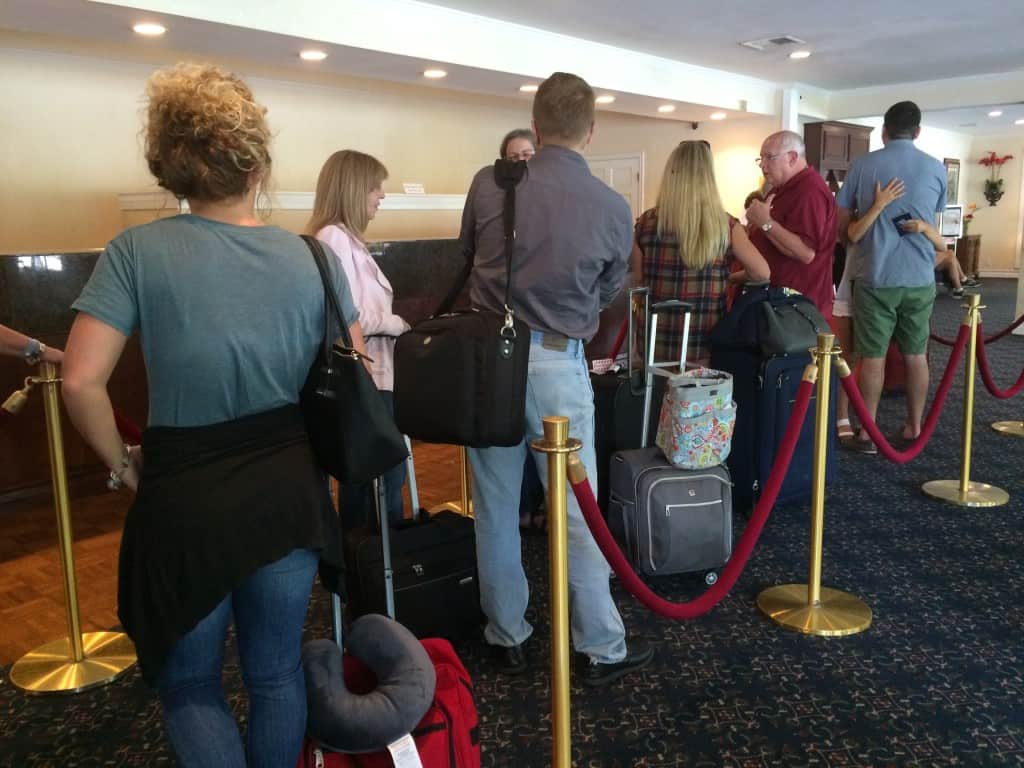 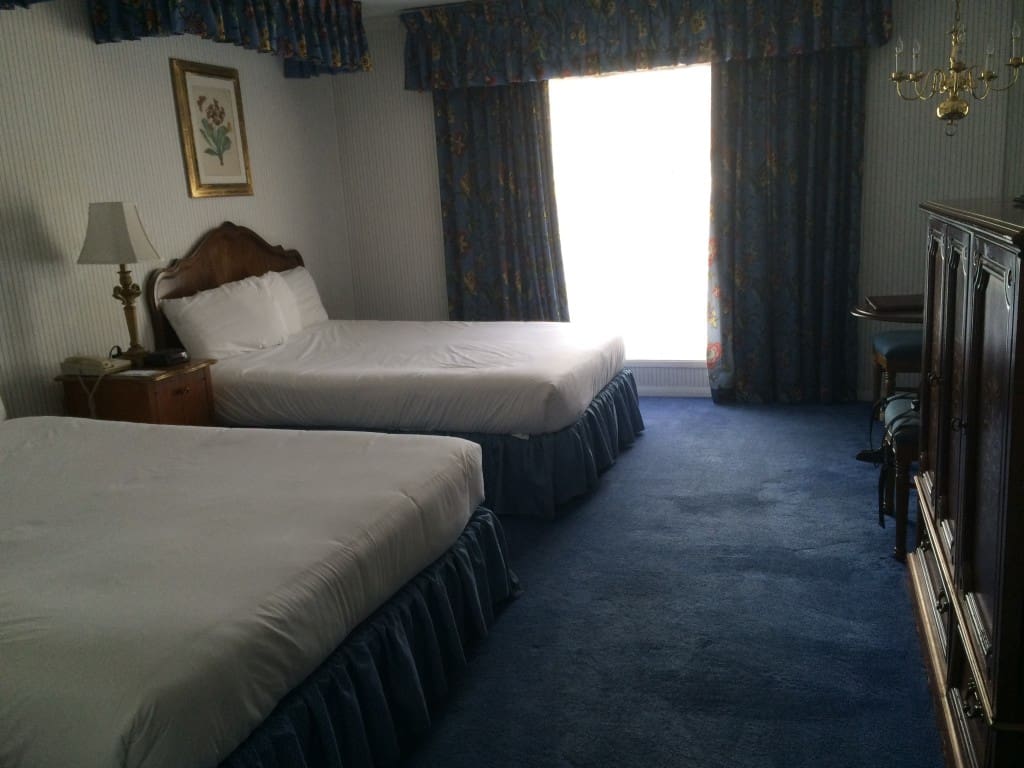 It smelled musty.  I wasn’t going to complain; I knew this resort and all the nearby hotels were sold out.  But when I was getting for bed and walked barefoot into the bathroom, I discovered that the carpet in the entryway was wet.  I didn’t see anything leaking anywhere in the room, but obviously there was a problem somewhere and, judging by the musty smell, there’d been a problem for a while.  I was exhausted and it was late, so I stayed in the room on Tuesday night.  On Wednesday morning, I went to the front desk and asked to be moved to a new room.  My new room was downstairs in the same building and obviously had a facelift.  I had no problems with the new room — I was hardly ever in my room, except to sleep! 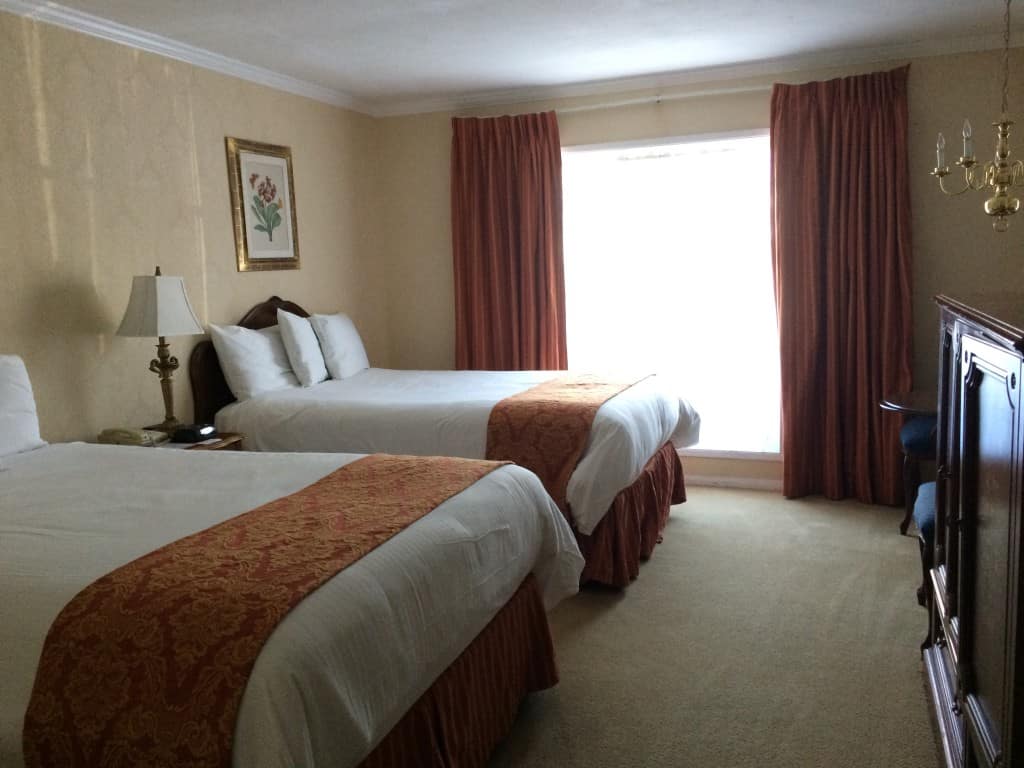 The English-garden-meets-California landscaping was beautiful! 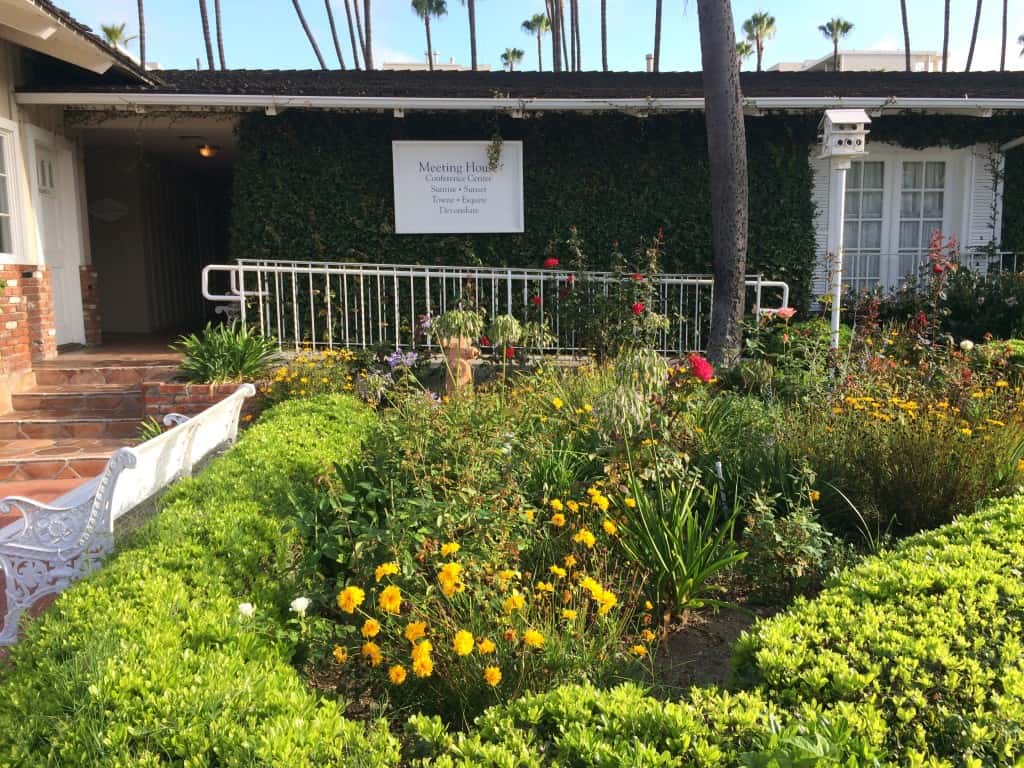 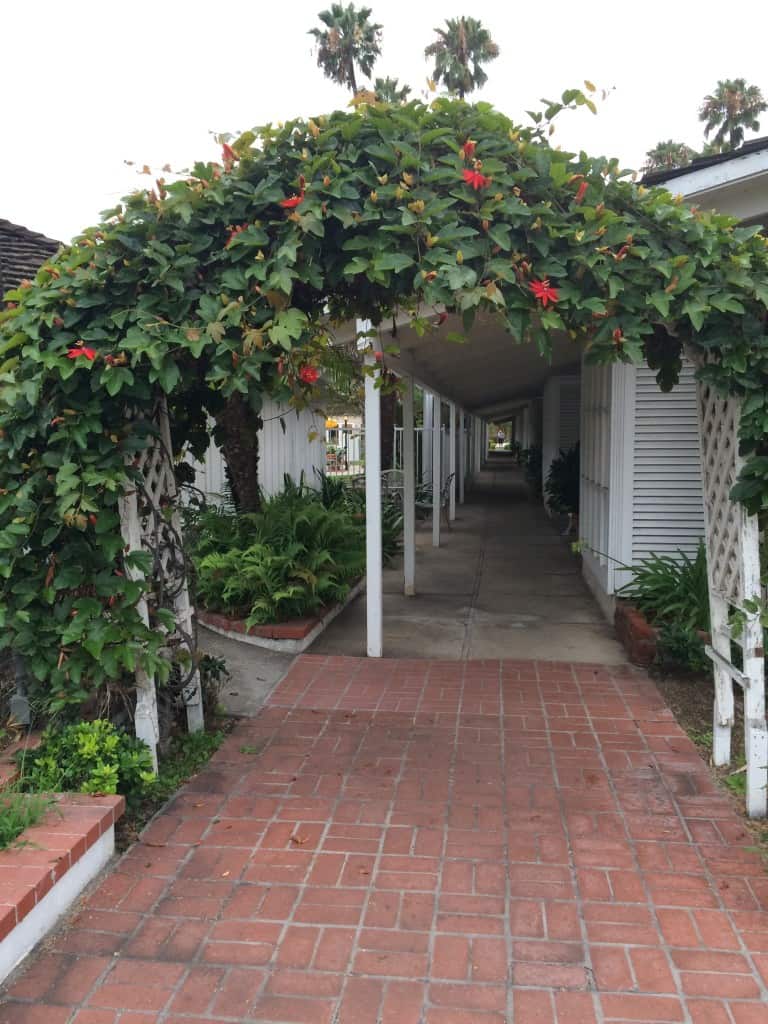 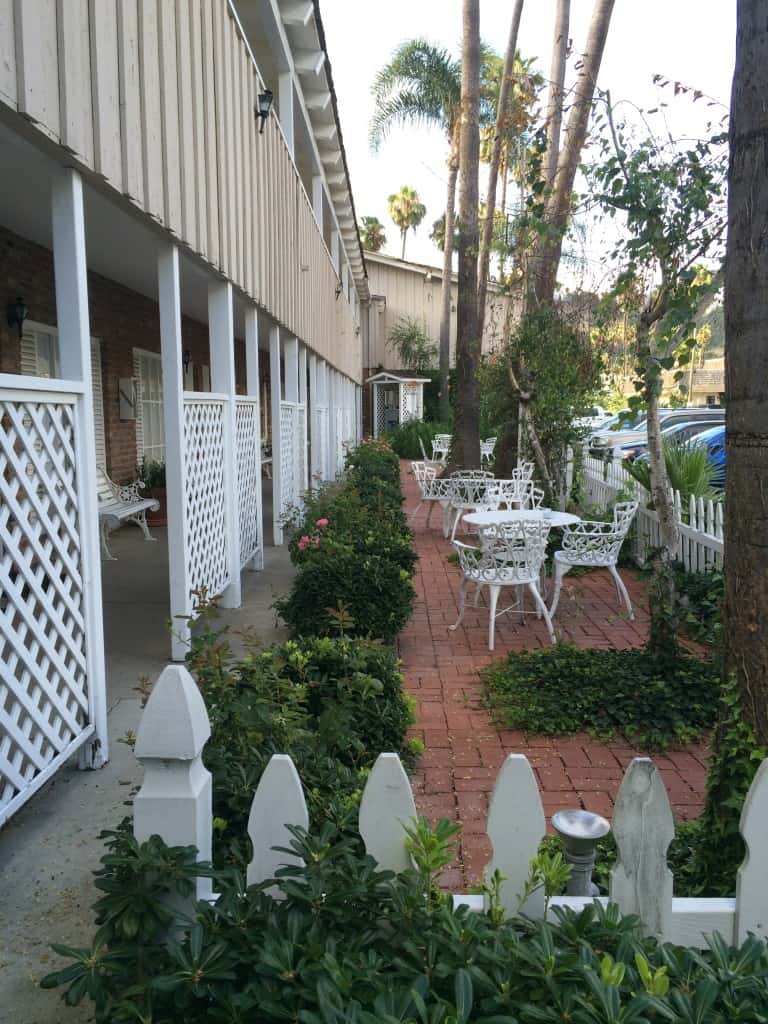 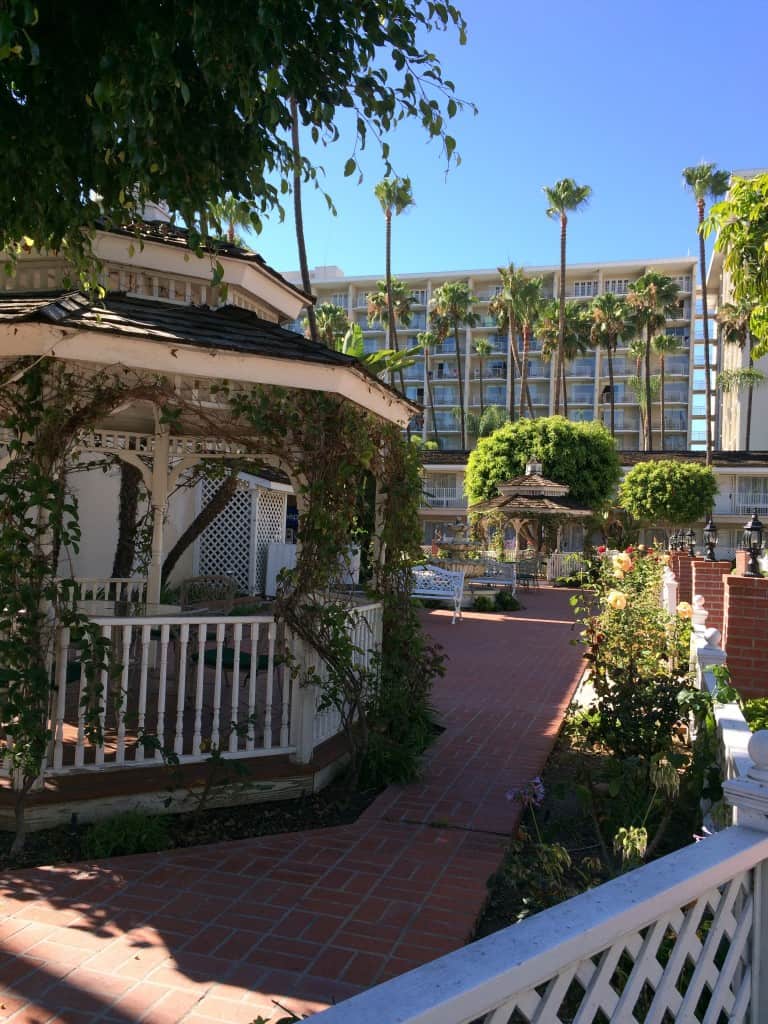 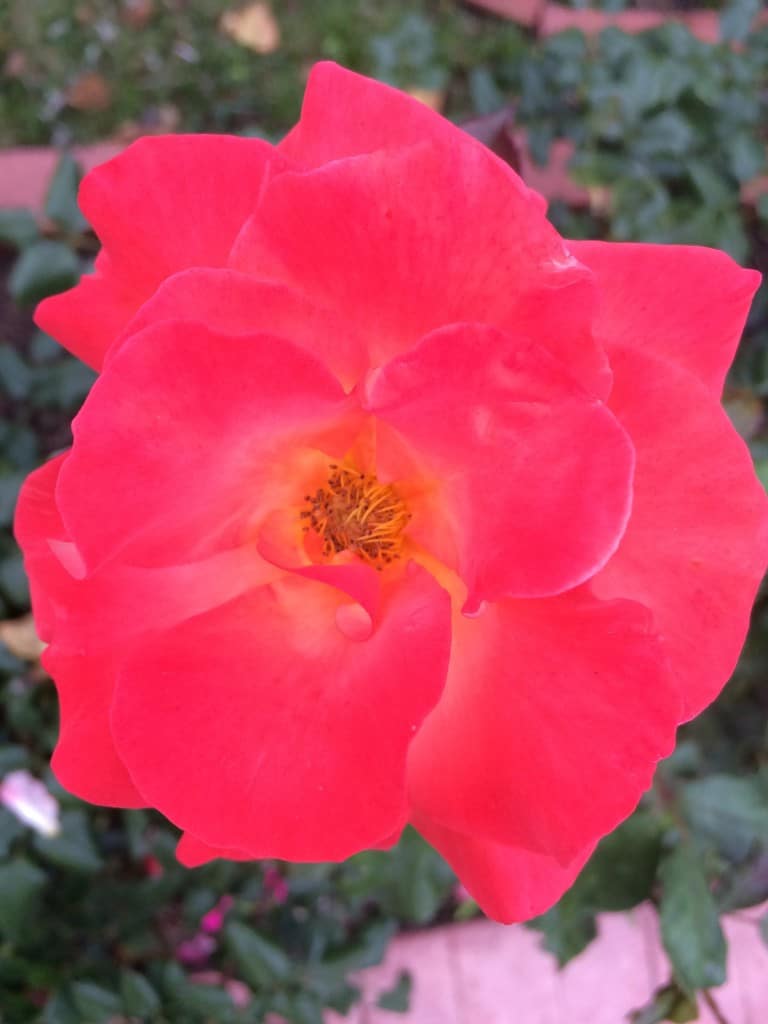 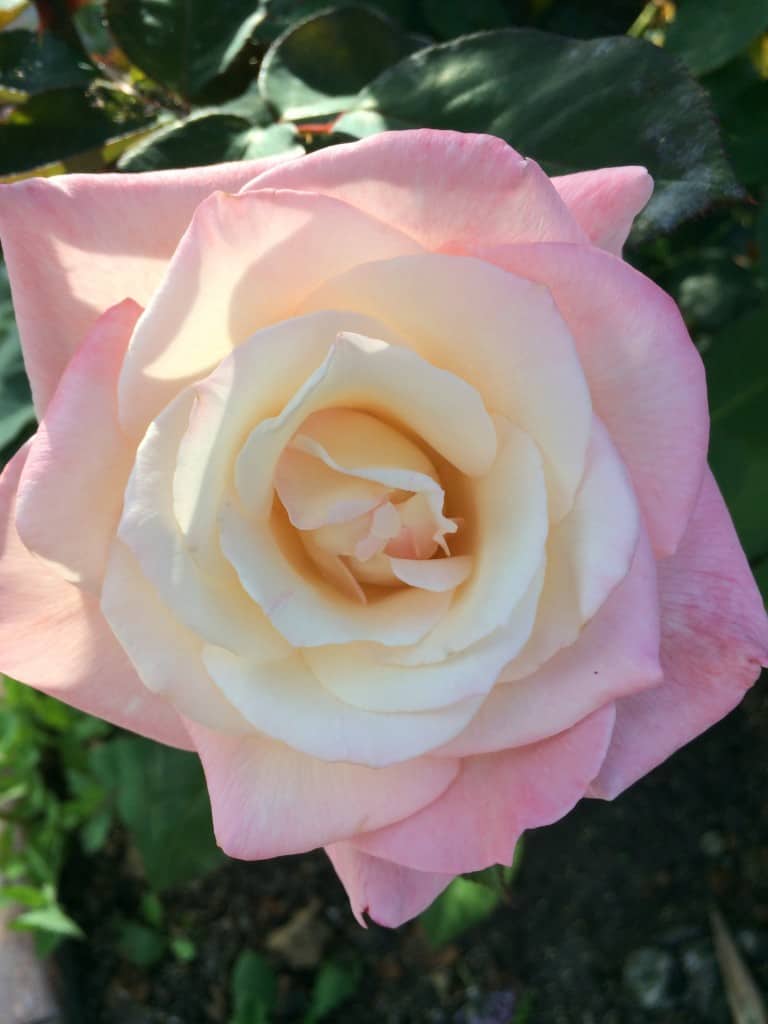 I spent Tuesday afternoon and evening in my room, even ordering room service for dinner.  I took a nap for a while, finished knitting the last 3 Level 1 swatches that I wanted to finish before Master’s Day, and then blocked all 15 of the finished swatches.  (The swatch on the bottom right isn’t one of the Level 1 swatches; it was homework for one of the Masters Day sessions.)  I brought my blocking mats with me, just for this purpose! 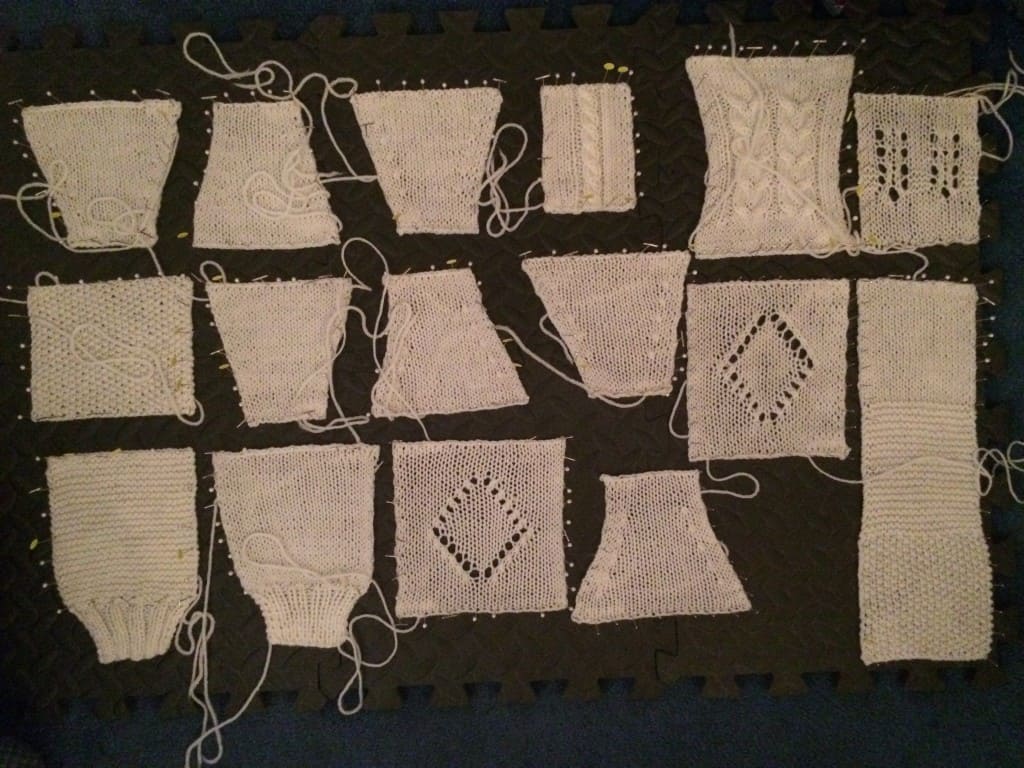 Tomorrow I will write a post about Master’s Day.  I learned a lot about my knitting and about the Master’s program.  I’m particularly glad that I went to San Diego early so I could attend Master’s Day.