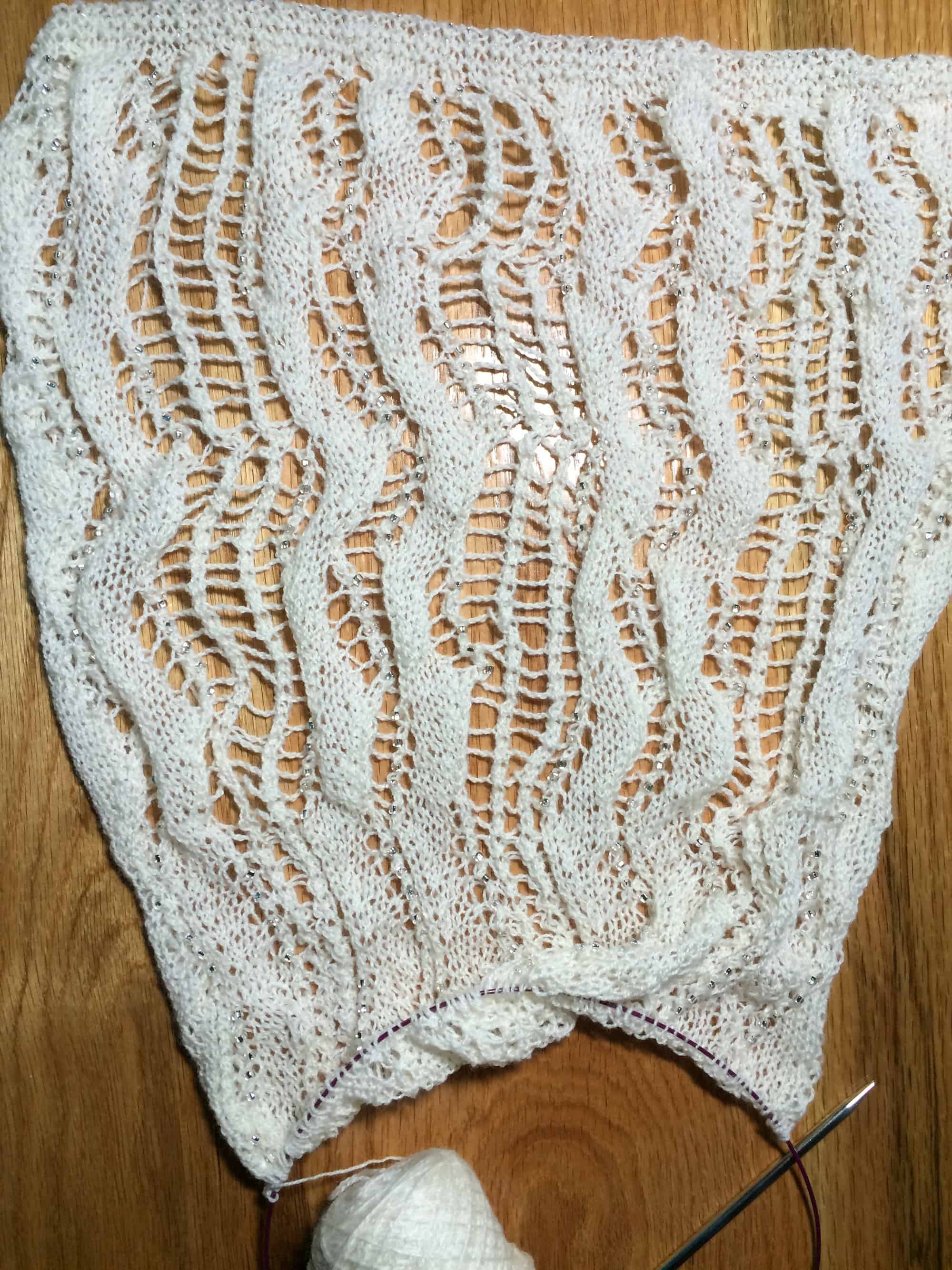 I have been getting a little crafting done.  I’ve been focusing on getting non-crafting projects done, so I haven’t had as much time to play with fiber as I’d like.  But I have made progress on several projects!

I’m just about finished with this shawl.  I’m on the very last corner, and will probably finish knitting it tonight!

I finished knitting the scarf that I started when I needed something to knit during a midnight visit to the emergency vet with Pepper.  I just need to weave in the ends.

This shawl was the oldest UFO that I found when I did the UFO Inventory in January.  It’s been an UFO since Fall 2010.  I was shocked to find that I still had the pattern in my Knit Picks magnetic pattern holder, and the magnet was still on the right row!  I’ve started working on it again, and have done 1.5 pattern repeats.  This is the project that I’ve been bringing to Wednesday night knitting group for the last couple weeks.  The pattern isn’t as difficult as it looks, and I’m less likely to have beads spill all over the place at the yarn shop than at home, where I have 3 furry hazards. 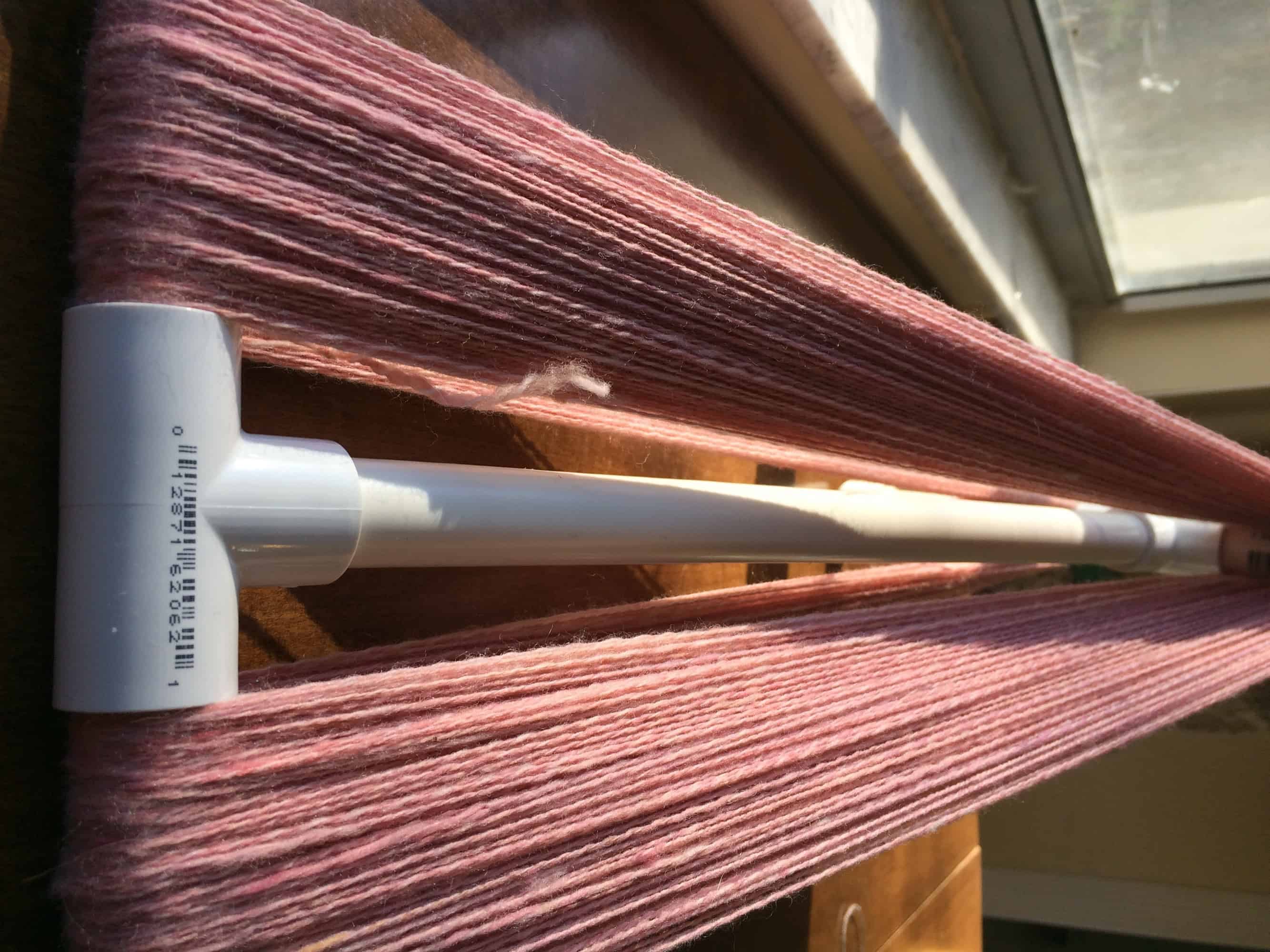 I started this week working on some UFOs, but later in the week cast on a couple of new projects!

Yes, really!  It’s been sitting around since December, and I finally picked it up again.  I was sick over the weekend and spent two days sitting on the couch watching tv, so I got quite a bit done.  I’ve finished the first of the five corners, and should be totally done with knitting this shawl before next Wednesday.  I’m not sure if I’ll get it blocked or not.  My new-to-me floor loom is currently sitting in the dining room, in front of the table I use for blocking.  I’m not sure if I have enough leaves in the table to block a MAPLE LEAF shawl or not.  If I don’t, blocking will have to wait until I can move the floor loom into my home office.

I finished plying this fiber while at spinning group the first Saturday in February.  I have it wound onto the niddy noddy.  I just need to tie it and wash it to set the twist, and it will be done.

This is the first new project of the week.  This is part of a narwhal-along in Ravenclaw Tower.  I cast on last Saturday, and expected to finish it that day.  Instead, I went to buy a floor loom.  I still have to sew on the flippers.  I’m also going to find something different for eyes because I think the beads I used are too small.

On Monday evening, our cat Pepper did not look well.  She was straining to use the litter box, but nothing was coming out.  She would get out of the litter box, rest for a while, then try again.  She also tried squatting in inappropriate places, like the cat’s toy basket.  I realized I was probably going to have to bring her to the emergency vet, and that I didn’t have any knitting that was mindless enough to work on during a midnight wait at the vet.  I quickly cast on this scarf, knit one pattern repeat, and bundled Pepper off for an enema at the vet.  I got about 4″ knit while I waited.  I knit a little more while waiting for dinner to finish yesterday.

I finished the star-rating index three weeks ago, but haven’t looked at this project since.  This week, I started looking at the 90 one-star patterns, contemplating the order in which I want to crochet them.  I made three separate lists: one of patterns that use a solid color, one of patterns that use multiple colors, and one of patterns that the author’s note identifies as a “good beginner square.”  Along the way, I made notes on the patterns, identifying stitches used or techniques, and contemplating the end uses of these 365 squares.  Some of the squares will definitely be dishcloths.  Some of the squares might be afghans or scarves.  I need to have some ideas so that I can pick out appropriate yarns.  My head was spinning a bit after looking at all the information, but it was a good start at determining the best approach, given my modest crochet skills.  I hope to make the final project list this week.

I haven’t posted progress in a couple of weeks as I’ve been visiting with friends and family.  I’ve got a lot in progress at the moment!

Last week, I only had one project in progress.  That’s no longer the case!  I’m back to my usual project juggling act.