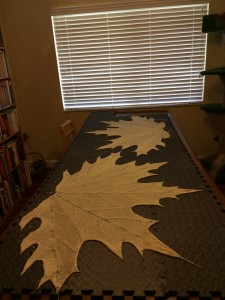 What Can I Say?

Even though I’ve now knit this pattern five times, I feel like I learn a little something new with each one.  MAPLE LEAF the Third was all about weaving in of ends.  Since I knit it exactly as the pattern was written, I had 54 ends.  I usually avoid weaving in ends because I am not very good at it.  I used MAPLE LEAF the Third as a vehicle for improving my skill at weaving in ends.  I used to weave in ends willy nilly, looping the end around in whatever way I could.  It wasn’t pretty.  With MAPLE LEAF the Third, I started duplicating stitches.  I carefully followed the path of the purl stitches on the wrong side, so my ends sit on top of their path.

I tried a slightly different edge stitch on  MAPLE LEAF the Fifth.  I have been knitting the last stitch and slipping the first of each row.  This gives an elongated stitch on the edge that I find pretty and it is easier to slip stitch crochet through it than if I knit every stitch on the edge.  I was slipping the first stitch of each row as if to knit, on the theory that if I wasn’t slipping it, I would be knitting it.  On MAPLE LEAF the Fifth, I slipped as if to purl.  I like this much better.  Slipping as if to knit twists each stitch, making them a little shorter and a little more difficult to distinguish when slip stitch crocheting along the edge.

(Thanks to my Big Eagle (this is the name HPKCHC Ravenclaw gives to the mentors assigned to first year students), Soprano1, for coining that word when I posted this picture and comment on Facebook!)  Since these shawls take 1.25 skeins of yarn, I have to add a new skein on every one.  Usually, I add the skein at the beginning of a new row so that I don’t have to fiddle around to avoid a hole in the middle of the work.  There are some things that never seem to happen.  For example, coming to the end of a point and binding off at exactly the end of a skein of yarn.  But it happened!  With MAPLE LEAF the Fifth! 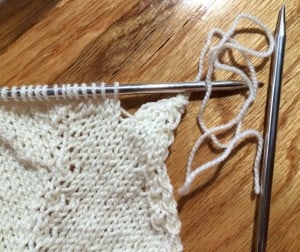 I usually block on my bed because it is the only flat surface in the house that is both large enough and not accessible to the cats.  We do not allow the cats in our bedroom.  We used to, but Tiger likes to play with your eyes when you are sleeping.  With his claws out.  He also likes to crawl under the covers, shimmy down to your feet, and lick them.  Or bite them, if he’s feeling playful or you move them the wrong way.  While these traits were somewhat cute when he was a baby kitten, they are not at all amusing now that he weighs more than 22 pounds.  So the cats were banished from our bedroom.  We don’t let them in even when we aren’t sleeping so they will not think they are allowed in there.

The table I blocked these on is unique, so I thought I’d share some details with you.  This table was originally owned by my Great Aunt Lucy.  When Lucy was 65, she eloped to Las Vegas.  After they were married about a year, Lucy and her new husband Bill decided to become RV nomads.  This required substantial downsizing.  Lucy opened the doors of her home and invited her nieces and nephew (she had no children) to take anything they liked.  My mother got this table.  I was about 8 at the time, so we had the table for most of my childhood, and I have many memories of parties and family dinners around it.  Earlier this year, my parents decided that the table no longer met their needs and bought a new dining room table.  They asked if I wanted this one and I said yes!

This table is unlike any I have ever seen.  In the blocking picture above, it is fully extended with all six leaves.  But when it has no leaves in it, it looks like a console. 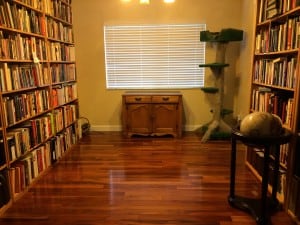 I usually have two leaves in it.  This is the perfect size for daily use, when Chris and I are the only ones home. 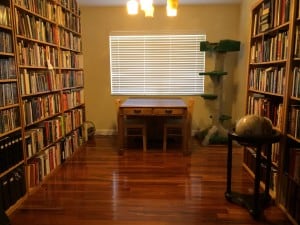 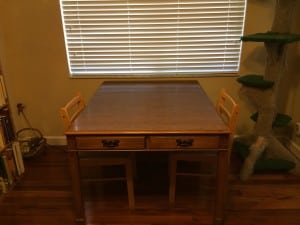 When I blocked MAPLE LEAF the Fourth, I added one leaf since the usual two was a little short.  I thought adding two leaves, for a total of four, would be enough to do the two shawls at the same time. 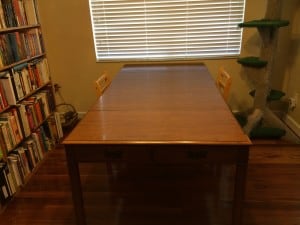 This turned out to be incorrect.  I had to add all six leaves.  Once I did, I had lots of space for blocking. 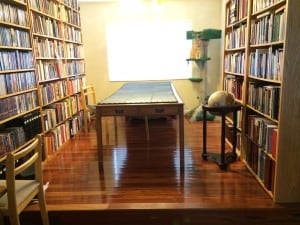 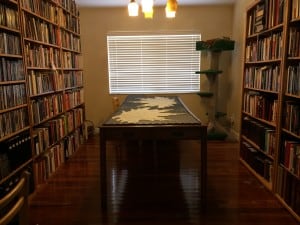 Eight more to knit, and I still have to dye them all.  I might be a little crazy.  In a good way.