I finished the Palindrome Hat that I made to match the Palindrome Scarf.  I have just enough yarn to finish the Irish Hiking Mittens to complete the set! 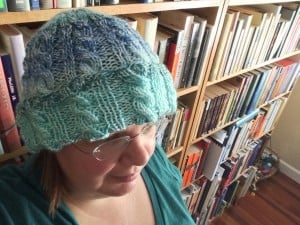 I made a couple minor modifications to this hat.  The original pattern calls for only 3 repeats of the cable, with the rest of the hat knit up in 2×2 rib.  I like the cable, so I continued it throughout the hat, only stopping when I got to the decrease rounds.  The pattern calls for knitting 8″ from the cast on edge before starting the decrease rounds.  Since I was turning this project in for HPKCHC Quidditch Round 3, I needed to use a minimum of 200 yards.  I was weighing my leftover yarn as I went along so that I would know how much yarn each repeat of the cable pattern required and estimate if I was using enough yarn to meet the minimum yardage requirement.  After 9 repeats of the cable pattern, I was at 7.75″ from the cast on edge.  I probably could have started doing decrease rounds at that point and been okay with the size of the hat, but weighing the yarn showed me that I wouldn’t meet the 200 yard minimum, so I did one extra cable pattern repeat.  I just squeaked in over the minimum yardage, so I’m glad I did that. 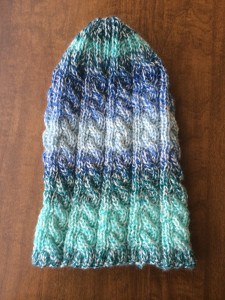 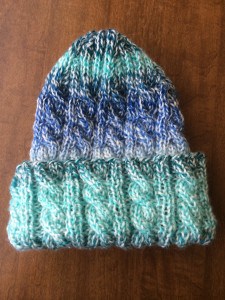 I submitted this Quidditch project in support of Canada.  The colors of the yarn remind me a lot of the colors in glacial ice.  I added six pictures of Canadian glacial ice in the Quidditch turn-in post.  Here’s a couple of samples for you: 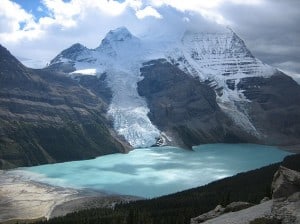 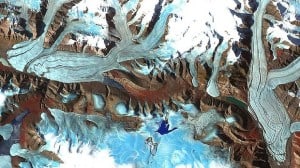 What do you think?  Does the yarn remind you of glacial ice?