I am away from home this week, but I do have knitting with me, of course!  This week’s post brought to you by MAPLE LEAF everything.

Last Wednesday, I cast on socks.  The yarn is Knit Picks Felici in the Maple colorway.  I was working on these during our flight, and one of the flight attendants was gushing over the autumnal colors of the yarn. 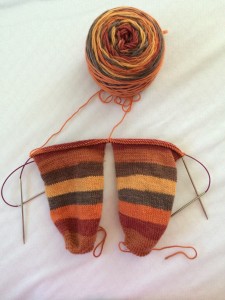 I am not quite done with the foot.  I’m hoping to finish everything except the heels this week.

Last Sunday, I cast on for MAPLE LEAF the Sixth.  I’ve only finished the first 28 rows. 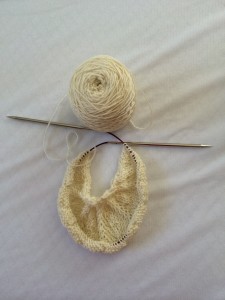 In mid-January, my mother-in-law called me and told me she was having a party in her yard Labor Day weekend.  She already had the guest list written, a menu planned, and a to-do list to get her house ready.  I believe I’ve mentioned on this blog that between March 2012 and November 2013, my husband and I lost 14 family members; 5 on my side and 9 on Chris’s side.  My mother-in-law wanted to have a family reunion for a happy reason rather than a funeral.  There’s birthdays to celebrate: two people turning 50, one turning 85, one turning 12, and one turning 10, all within about 6 weeks of each other.  Plus a cousin’s daughter got married last year, but never had a reception because they didn’t have a budget for one.  So we are having one giant party —  120 people invited and about 75 attending.  All in my mother-in-law’s yard.

Chris and I got here on Monday.  Everybody has a list of things to do.  Speaking of which — I better get back to my list!  See you next week for WIP Wednesday, August wrap up, the kick-off of the next HPKCHC term, September plans, and an extra special post that I’ve been saving just for next week!