The layette consists of 5 pieces: a blanket, socks, sweater, tam, and bonnet. 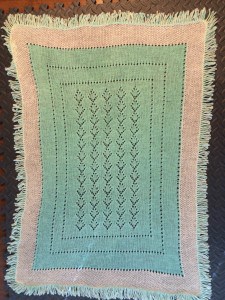 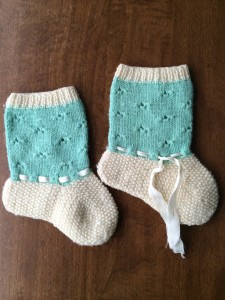 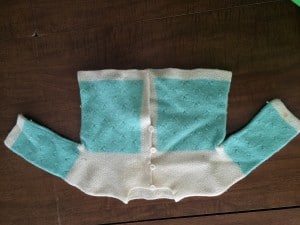 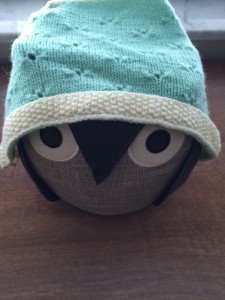 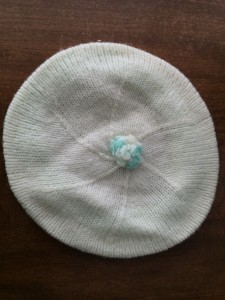 I blocked the blanket in order to get pictures.  It was a little wrinkly from being stored for so many years.  I wasn’t sure what kind of yarn was used to make the layette, and since all I have is the completed items, I couldn’t do tests on the fiber.  I suspected it was wool because patches of the sweater look felted, but I was not sure.  As soon as I put the blanket in the yarn to soak for blocking, the unmistakable and (for a yarny person anyway) pleasant smell of wet wool confirmed my guess.

I looked carefully at the back of the blanket, trying to understand the construction of the blanket.  My first guess was that the center was knit first, then the moss stitch border was added, and finally the fringe was attached.  I now believe that I was incorrect.  The fringe was clearly added last, but I believe the rest of the blanket was knit in one piece.

The feet are in moss stitch, matching the edge of the blanket.  The pattern of the blue is a small diamond shape, again echoing the blanket, but at a scale appropriate to the socks. 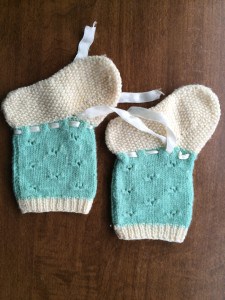 The yoke of the sweater is all moss stitch.  The bottom band and the bands around the wrist are ribbing.  The body of the sweater has the same small diamond motif as the socks.

This piece was the hardest to photograph.  When it is flat, you really can not see the construction:

I put it on the owl bookend so I could try to get a better picture, but the owl’s shape is different than a baby’s!

I hope these pictures help you see it a little better.  The white panel in the back and the front band are moss stitch.  The bottom band is ribbing.  I believe the bonnet is knit in several pieces, which are later sewn together.  The front band is clearly sewn onto the blue part.  It looks like the blue part is sewn onto the white panel in the back.  The ribbing is probably picked up and knit after the blue portion was attached to the white moss stitch panel, but before the front band was sewn to the bonnet.

The Tam is the most straightforward of all the pieces.  It is a little ribbing and then stockinette, with standard looking decreases for shaping. 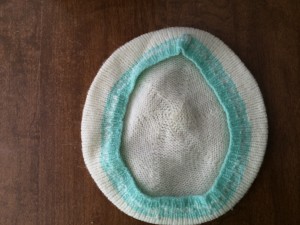 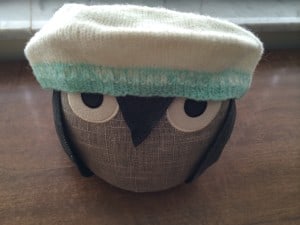 It is obvious that these pieces were actually used to clothe my then-infant husband.  There’s stains: 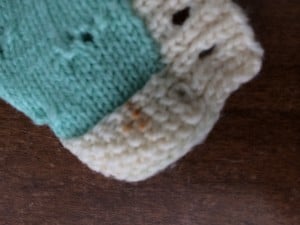 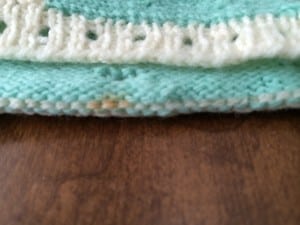 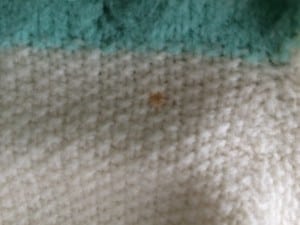 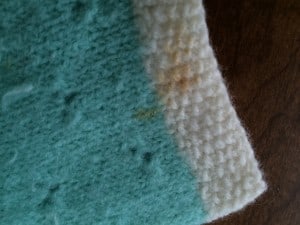 The sweater is pilled and felted from frequent washes: 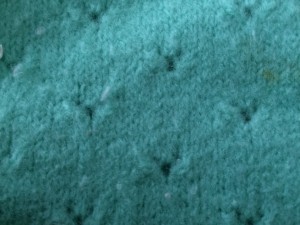 This evidence of use makes the items even dearer.  You can almost picture the chubby baby, messily eating his macaroni and gravy (pasta and spaghetti sauce if you, like me, aren’t Italian!) while his mother or grandmother or aunt clucks at the mess.

The Heart of Knitters

Each stitch is a little bit of our life’s energy.  We directed our energy into the making of that stitch and the next and the next and the next.  When we bind off, the world is a little warmer and, hopefully, a little happier.  We know that not everything we knit is an heirloom — nobody expects handknit dishcloths to last more than a year or two — but some things, especially the baby items that we so often infuse with our hopes for the future, perhaps those items will be saved.  And 50 years from now, that grown up baby will look at them and see our love there in every stitch.

Last January, my mother-in-law called to tell us she was planning a party for the last Sunday in August.  It was to be a big family reunion, in her yard, like they used to have when my husband was growing up.  We would celebrate Chris’s birthday, along with birthdays of 4 other relatives that happen around the same time.  In January, she already had the 120-people-long guest list and menu written out, and a to-do list so that her yard and house would be ready to host everyone.

Aunt Lena is still alive.  She is in her early 90s now.  She was not one of the 70 people who made it to the family reunion this past weekend.  She’s had Alzheimer’s for several years and no longer recognizes anyone.  She’s been living at home with her son, but recently moved into a nursing home due to the degree of care she requires.  I only met her once, back in 2002.  I was not a knitter at that time; I met her a few weeks after I gave away all my knitting needles, in the belief that I would never be  able to knit again because of my dislocated finger.  I never got to talk to her about her knitting or to learn from her.

Lena’s granddaughter, Kristen, was at the family reunion.  This was the first time I met Kristen.  She’s in her early 20s, married a year ago, and pregnant with her first child.  The baby is due in January.  They do not know yet if the baby is a boy or girl; it has not been cooperative during the ultrasounds!

Lena is no longer able to knit a layette for her grandchild, but I am.  Over the next few months, I am going to reverse engineer the layette that Lena knit for Chris 50 years ago, and knit a new set for Kristen’s baby.  Perhaps, 50 years from now, that baby will be running his or her fingers over my stitches, trying to reverse engineer them yet again, and wishing it was possible to ask me about my work.

One thought on “Heirloom Knitting”