I love weaving!  Yet again, as soon as I finished my last project (the Double Rainbow Scarf), I tied on a warp for my next project. 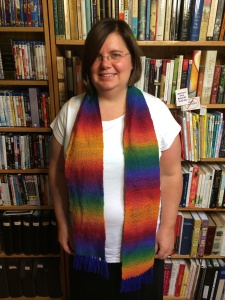 I submitted this project for Round 2 of HPKCHC Quidditch.  For this round, we are required to use free patterns and to link to the pattern we use for the project.  I didn’t really use a pattern for this scarf.  It is plain weave, the most basic beginner weaving, because that’s me — a beginner!  If you have never woven before and wanted to make this scarf for Round 3 of Quidditch (I’m assuming that we have to link to patterns because our Round 3 projects must be made from the Round 2 patterns posted by our classmates), I recommend the YouTube videos by Kelley of KnitPicks.  This 10 part series brings you through your entire first project.  Those videos, in combination with the sett information posted in the “Official Stats” section of this post are all the information you need to replicate this scarf.

Part 8 of the series discusses how weaving works and basic weave.  It does not use the term “plain weave,” but that is what she is demonstrating.  In plain weave, the horizontal yarns (the weft) alternately pass over and under the vertical yarns (the warp).

So far, my greatest struggle with weaving remains selecting appropriate warp yarns.  I have lots of yarn that I would like to use for weaving, but almost none of it is appropriate for warp.  I did not have enough of the Mochi Plus left to use it for both warp and weft in this scarf, but I probably wouldn’t have used it for warp again even if I had.  I went stash diving to find something that worked.   I was worried that the Blue Sky Alpaca might fuzz up like the Mochi Yarn did on the Double Rainbow Scarf, but it didn’t.  The Blue Sky Alpaca turned out to be a good choice for warp.  I had just enough of the Mochi Plus for the weft!  The Blue Sky Scarf is a couple inches shorter than the Double Rainbow Scarf because I ran out of Mochi Plus.

The only difference between the Double Rainbow Scarf I made and the Blue Sky Rainbow Scarf is the warp.  The two scarves were made on the same loom, with the same sett.  The warp was the same length, even though the finished dimensions of the scarf are slightly different.  The finished width is the same.

One reason that I chose to make another scarf with the Mochi Plus was so I could see the affect of using a different warp yarn.  While it is subtle, you can see vertical stripes on the Double Rainbow Scarf, since the color of the warp varied.