This past weekend, I attended my local weaving guild, The Weavers of Orlando.  Sitting on the member garage sale table, I found this beautiful caramel-colored fleece.  I’m a very new spinner, having just gotten my first wheel and learned to spin this past April.  I know that I want to hand process a fleece sometime just to say that I’ve done it, but that was a someday kind of goal, with no immediate plans.  I managed to avoid buying a fleece at the various fiber events I’ve attended this year, despite visiting fleece barns and seeing so many beautiful options.  But there was something about this fleece.  I asked the seller what type of fleece it was.  She didn’t know, but thought it might be alpaca.  How much?  Five dollars.  “I’ll take it,” I replied.

Now that I have the fleece, I have to figure out what to do with it.  Since I had no plans to hand process a fleece and I’m such a new spinner, I do not have any of the tools needed to process the fleece.  In order to decide what tools I want to purchase for this purpose, I decided to evaluate the fleece characteristics.  I took out my copies of The Fleece & Fiber Sourcebook

and The Spinner’s Book of Fleece

(which I reviewed here) to guide me through the process.  While the Spinner’s Book of Fleece only gives detailed information on spinning sheep fleeces, it includes a chapter on evaluating fleece characteristics that I thought would be helpful.

First, I weighed the fleece.  I have a scale I use for yarn, but it is small and only weighs up to a pound.  Instead, I took out my kitchen scale, which can weigh up to 10 pounds.  The kitchen scale is too small to hold an unconfined fleece, so I kept the fleece in the bag and then put the bag into a bowl and squashed it down as much as I could so it wouldn’t fluff out over the sides of the bowl and fall onto the counter. 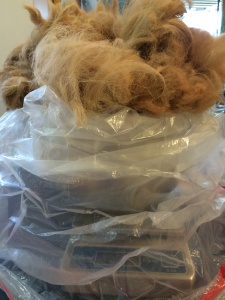 The fleece weighs 1 pound, 12.1 ounces.  After weighing the fleece, I put down plastic tarp on my kitchen counter and laid the fleece out on that so I could get a closer look at it.

When I was at the guild, I had dug around in the bag and discovered a few things about the fleece.  It has little or no lanolin in it.  It is also relatively clean, with very little vegetable matter or visible dirt.  I thought perhaps the seller had already done some cleaning, but when I asked her, she said she had not.  When I laid out the fleece, I could see my initial impressions of the fleece’s cleanliness were correct.

In my evaluation of the fleece while I was at the guild, I failed to notice that this was a double-coated fleece.  I was looking for guard hairs and did not see any.  However, when I laid the fleece out, it was obvious that the fleece contains two very different fibers — a shorter, crimpy, and soft fiber and a longer, wiry fiber with little or no crimp. 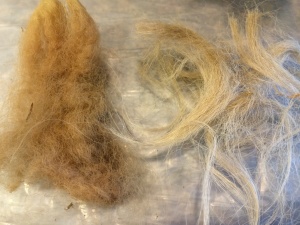 The wiry fiber is mostly in clumps that easily pulled away from the shorter fibers.  However, when I pulled out some shorter locks to evaluate length and crimp, I found some of the wiry fibers mixed into the shorter locks.  It is difficult to see the wiry fibers when they are individually mixed in because they are so fine.  The blond color of these wiry locks does stand out against the darker caramel of the short fibers, so if I look carefully, I can distinguish them. 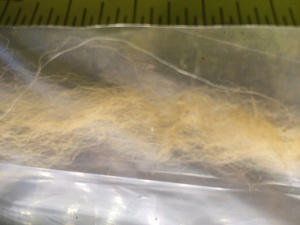 The next step was to determine the length of the locks.  The Spinner’s Book of Fleece distinguishes between lock length, which is measured without stretching out the fibers, and fiber length which is measured when the fiber is stretched (page 66).  Therefore, I measured the two different types of fibers using both methods. 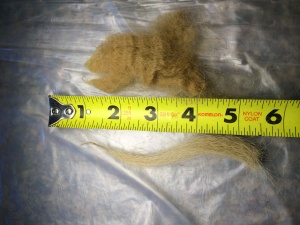 The next step I took was to measure the crimp.  I am not sure that I did this correctly.  Neither book explicitly defines a single crimp.  Since crimp means that the fiber has peaks and valley, I wasn’t sure if each peak and valley was a separate crimp or if I just count the peaks.  I looked at the examples of crimp on page 45 of The Spinner’s Book of Fleece and it looks like each peak and valley is counted individually.  Still, it is difficult to even see the crimp.  Here’s a picture of one inch of the finer fiber, taken with a 10x macro lens. 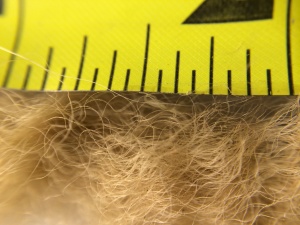 I think that’s 9 crimps to the inch.  Unfortunately, neither The Fleece & Fiber Sourcebook nor The Spinner’s Book of Fleece lists the crimps per inch for the various fleeces, so I don’t have a useful benchmark for comparison.

So What Does All This Mean?

I did not expect to be able to identify the breed of this fleece.  There’s just too much information that I don’t have and can’t measure.  However, I did look at the alpaca information in the Fleece & Fiber Sourcebook (pages 367 – 374 in the hardcover) to see if the measurements I took compare to alpaca ranges.  Alpaca come in two different varieties: huacaya (wooly) and suri (long locks).  Huacaya is much more common and, if this fleece is alpaca, it is definitely the huacaya type.  The Fleece and Fiber Sourcebook says that alpaca usually do not contain guard hair, but may have thicker hairs on certain parts of the body.  Since the wiry hair appears to be both in clumps and mixed into the fleece, that is a point against it being alpaca.  The color, fleece weight, and staple length of my fleece are all consistent with alpaca.  These characteristics are also consistent with llama and llama are more likely to have guard hairs.

The primary purpose of this exercise, however, was to determine the best way to process the fleece and choose the tools needed for that method of processing.  At this point, I think I have three options.  I can not worry about separating the coats and spin a yarn that contains both fibers, I can follow the recommendations for separating the layers of double-coated sheep (by hand or by combing) in The Spinner’s Book of Fleece, or I can follow the recommendation for processing llama fiber (flicking, because combing results in lots of waste) in The Fleece and Fiber Sourcebook.

The Spinner’s Book of Fleece recommends separating after washing because the fibers seem to come apart more easily.  I think I’m going to wash the fleece first before deciding on flicks or combs, so I can see how the cleaned fleece looks.  I have a lot of projects I’m working to finish before the holidays, so doubt if I will get the fleece cleaned until the new year.  Putting of the decision on flicks versus combs means I might be able to use Christmas gift money to purchase the tools.  And, let’s be totally honest, I’m most likely to both flicks and combs so I can sample all the options!