I’ve got a lot of projects in process right now!  I haven’t quite finished the ones I already had on the needles and I’ve started a few new projects.

I finished all the knitting on MAPLE LEAF the Sixth and I wove in the ends.  I just need to block it, which I will probably do tomorrow.  In the picture below you see loose ends because I do not cut my woven in ends until after blocking. 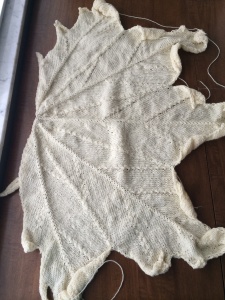 I ignored the socks a bit in order to finish MAPLE LEAF the Sixth.  I am right around halfway through the leg. 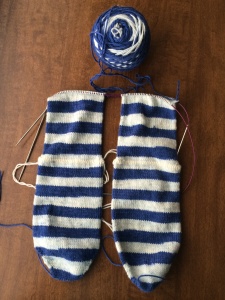 I started spinning this fiber at the end of July.  It is taking forever to spin.  I think part of the reason for this is that the 20% silk content is demanding to be spun finely.  The most important factor, however, is that I haven’t dedicated much time to spinning.  This week, I managed to spin for an hour.  Since it is so finely spun, I’m not sure that my progress is even visible on the bobbin! 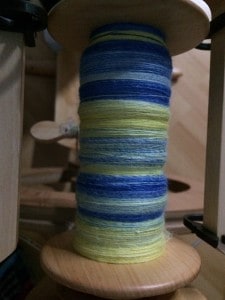 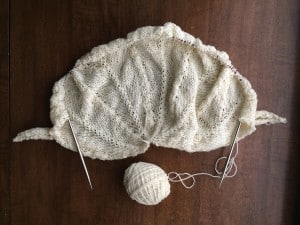 This is my second weaving project.  One of the reasons I wanted to take up weaving was to use up some of my yarn stash.  I have yarns that I bought with the best of intentions, but that no longer fit the way I craft.  Weaving uses up tons of yarn and a wide variety of yarn can be used to beautiful effect.  Stash down plus beautiful finished objects plus new skill = major win!  This scarf is the first project I’m doing with my own yarn.  It is one that I bought because it was beautiful.  I think I had a plan for it, but I don’t remember what that plan was!  Now it is getting turned into a scarf that will be donated to a homeless shelter. 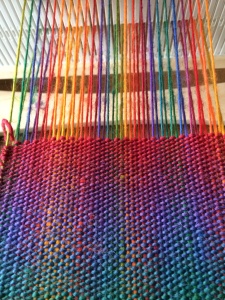 Me, Myself, and I

In early August, I was diagnosed as diabetic.  This diagnosis did not come as a surprise to me.  I am overweight and I have a strong family history of diabetes.  It seemed inevitable that I would eventually be diagnosed as well.  I now have a blood glucose meter and use a lancet in a pen device to prick my finger 5x a day to test my glucose.  I have the pen on the highest setting, but I still have a hard time getting blood from some of my fingers.  Yesterday, I went to a diabetic education class.  When I asked about the proper method of using the lancet in the pen, they told me to press down on my finger with the tip of the pen before I hit the button to release the lancet into my finger.  I tried it last night, but must have done something wrong.  I got almost no blood, but my finger hurt a lot.  I ended up pricking a different finger to get blood for the test.  When I was telling my husband about it this morning, I discovered that the tip of my finger is bruised 🙁 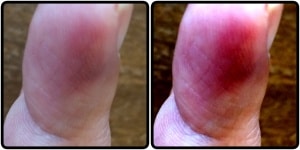 It was really hard to get a good picture.  This is my middle finger, so I had to crop the picture in order to avoid the appearance that I was flipping you off.  It isn’t easy to get a picture that is in focus when you are trying to balance the camera and press the button all with only one hand.  Lighting was also an issue.  The picture on the left is the one that I took.  The picture on the right is the same picture with some added contrast so it is easier to see the extent of the bruise.  The actual coloration of the bruise is a bit darker than the unedited picture, but not by much.

Fortunately, the bruise is not interfering with my ability to knit.  It certainly hurts like crazy if I accidentally brush it against anything!  I hope it heals quickly.