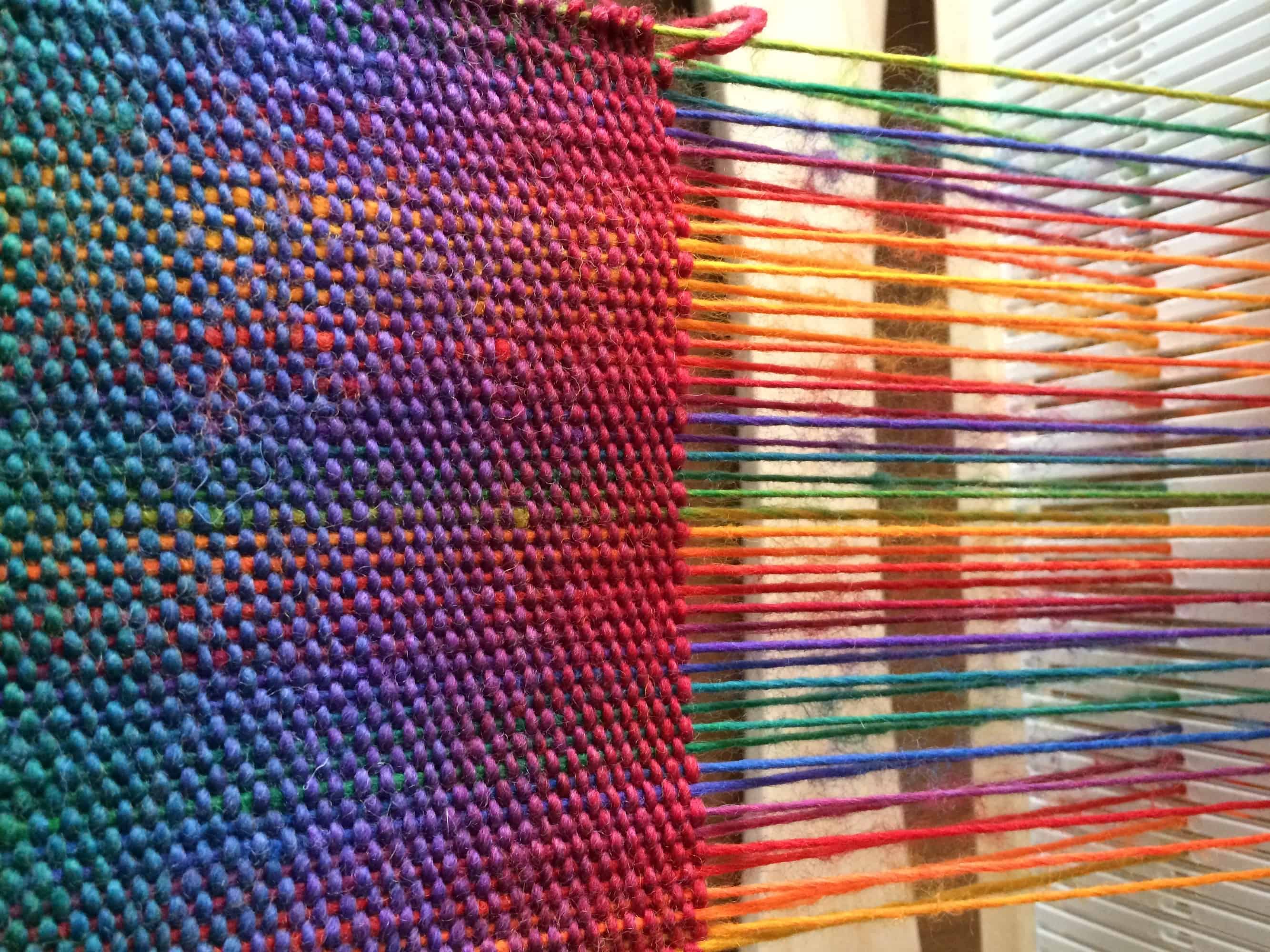 As soon as I finished my First Ever Weaving Project, I tied on the warp for my second project, a scarf.  I finished the scarf last Friday and blocked it over the weekend.

I knew I wanted to weave a scarf and I knew which stash yarns I want to weave, so I went through them to see which ones I wanted to use first.  I was looking for a yarn I could use for both the warp and the weft, so I needed something strong enough for the warp and that I had enough of for the entire scarf.  The first several yarns I tried broke when I did the pull test on them.  With this test, you hold the yarn in your hands, with your hands positioned several inches from each other on the yarn.  Continue holding the yarn tightly, bring your hands together and pull them apart quickly (you aren’t sliding your hands along the yarn.  You are carrying it with you as you move your hands.  When you bring your hands together, a loop should dangle between them).  If the yarn breaks, it is too weak to use as a warp yarn.

I was excited that this particular yarn passed the pull test.  It is a yarn with long color changes, so I knew that the warp would form long rainbows.

I thought the finished product would look something like a rainbow plaid as a result of the rainbow in the warp and the rainbow in the weft.  When viewed close up, it almost does.  From a distance, you do not really see a plaid.  The rainbow in the warp does affect the finished product, however, by subtly muting the colors.  That probably sounds strange because the colors still look quite vibrant!  However, on Friday evening, I went back to the yarn store where I took the class because the weaving instructor dropped in for an hour to answer questions any of the students had and to help with the finishing work if anyone had not finished at home.  Marney, the store proprietor, happened to have a scarf knit with this exact yarn.  When the two scarves were held side by side, you could see a significant difference in the color between the woven and knitted scarves.  Unfortunately, I did not get a picture of the two scarves together 🙁

As I wove, I became concerned about the stability of the Mochi Plus as a warp yarn.  It is a single and as I moved the heddle back and forth from the up to the down positions and as I beat the new weft threads into place, the yarn started to get fuzzy.

I was worried that this fuzziness would weaken the yarn, causing it to break.  Fortunately, the yarn held up for the entire project without breaking.  I have two skeins of this yarn in this colorway and another 4 or 5 in another colorway, and I will probably only use it as a weft yarn in the future.  My luck might not hold up!