During the last week of August, while Chris and I were in New Jersey, I boarded Pepper at the vet.  This was traumatic for me; she’s 18 years old and never been boarded before.  I’ve always had someone come to my house to feed and water the cats while we were away.  But her health was fragile, and she was taking 6 medications a day which was a lot to ask of friends or family.  So I boarded her.  I sent her with the USA Kitty Pi that I made a few months ago.  It never occurred to me that they might wash it, so I left no washing instructions.  They washed and dried it which meant, of course, that it shrunk.  It was now too small for Pepper!

Since Pepper was boarding again while we were in California, I needed to make another Kitty Pi to send to boarding with her.  She already had another Kitty Pi — the blue one that is visible behind the USA Pi in the picture above — but it is her favorite and I did not want to send it to boarding in case something happened. 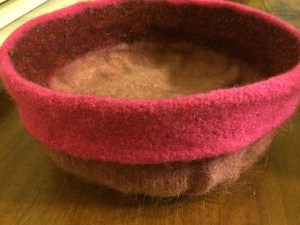 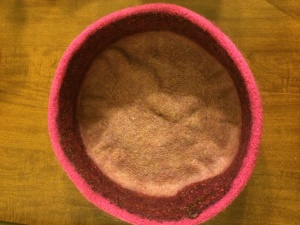 During this term of HPKCHC, Dolores Umbridge has cancelled all extra-curricular activities, including Quidditch!!  The prompt for the first round of not-Quidditch was to craft something that could be used to butter up Umbridge, so we can try to change her mind about Quidditch.  I decided to knit this pink Kitty Pi since we all know how much Umbridge loves (1) pink and (2) cats.

I knit this Kitty Pi in two days.  This is very fast for knitting through that much yardage!  Usually it takes me a week to knit a Kitty Pi.  This one needed to be done before we left for California, so I knit like the wind!

I love felting knitted objects.  It feels like magic that a big floppy thing shrinks down to just the right size!

The Kitty Pi wasn’t quite dry on Sunday evening, but I gave it to Pepper anyway so she could sleep in it that night and recognize it as her own before we brought her to the vet on Monday morning.

When I dropped Pepper off at the vet, I left a 4 x 6 notecard with instructions.  This includes handling instructions (since she has arthritis along her spine she must be handled gently), feeding schedule, and medication schedule.  At the bottom of the card I wrote. “PLEASE DO NOT DRY HER BED.  It is hand knit and 100% wool.  It will shrink.  I’m happy to bring it home wet.”

When I picked Pepper up from the vet, the kennel supervisor delivered her to me.  The conversation went like this:

“I shrunk the last one into a hat,” he answered, looking sheepish.  “I didn’t realize it was hand knit.  That’s totally cool!”

I should have offered the shrunken one to them for kennel use.  It doesn’t fit Pepper, but it would totally fit a smaller cat.  Maybe next time I bring Pepper to the vet, I’ll do that.