I finished the Palindrome Scarf yesterday, but did not get the photos done until today.  Official stats: 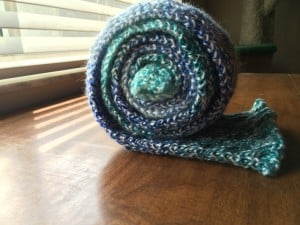 I first shared this project with you in last week’s WIP Wednesday post.  I cast on this scarf on May 1 and finished it on May 10.  That isn’t too bad for 440 yards!  The Palindrome pattern is, as the name implies, reversible: 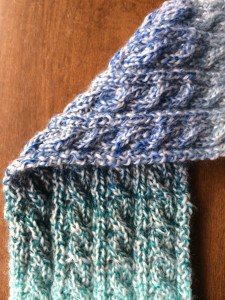 The pattern is pretty easy: K2P2 rib (that’s knit 2 stitches, purl 2 stitches, repeat across the row for my non-knitting family members who read this blog), with the cables worked every 6th row.   The pattern is written for 3 cable sections across, with instructions on how many stitches to add if you want additional repeats.  At first I cast on enough stitches to do 5 repeats, but it looked enormously wide on the needles, so I ripped out one set of extra stitches.  I am happy with that decision.  If I had gone with 5 repeats, I would have had to break into the second skein to make the scarf long enough.  Since I did not have to use any of the second skein for the scarf, I believe I have enough yarn to make both a hat and mittens to match the scarf.

Last year, I made 9 Quinn Bags as Christmas gifts.  These purses are full of cables, and by knitting so many, I taught myself how to make cables without using a cable needle.  I started the Palindrome scarf doing the same thing.  This was a bad idea.  I was dropping stitches all over the place.  The Quinn Bag cables are only 4-stitch cables; Palindrome is an 8-stitch cable.  The stitches for the Quinn bag cables are all knit stitches; the Palindrome alternates between knits and purls.  The purls came out pretty tight and were harder to move for the cable.  9 times out of 10, the stitches I dropped were purl stitches.  I knit the Quinn Bags with Peace Fleece, a rustic wool yarn that sticks to itself fairly well.  The Pinwheel yarn I used for the Palindrome scarf is 100% acrylic and very slippery.  I learned my lesson after one attempt at the cables.  On my way to the airport for MDSW, I stopped at a craft store and picked up a cable needle so I could knit this project on the plane, as planned.

I bought the Pinwheel yarn from Nomad Yarns in Indiana when I was there visiting my friend a couple weeks ago.  This is the first project I have ever made with this yarn.  I liked the yarn a lot.  The color changes helped keep my interest in the project.  Each color change was approximately the length of 4 times through the pattern rows, so I would push myself to knit to the next color change before I stopped for the night.  The yarn is a 2-ply yarn, and occasionally splitty.  It is also quite slippery.  I always use metal needles; with this yarn, I might have liked either wood or plastic to help with the slipperiness!

As you might imagine, here in Florida there is a limited need for warm weather gear.  As a result, I rarely knit hats, scarves, mittens, etc.  When I was in Indiana, I learned that Beyond Homeless, a shelter in Greencastle (the town where The Fiber Event was held) had recently reopened.  They had closed 3 years ago, due to a lack of funding.  As far as I know, they did not have a stock of warm items.    The Palindrome scarf, along with the matching hat and mittens that I should finish by the end of June, will be sent to them.