I am not going to post about every project I completed during the six weeks I took off from blogging.  I’m making an exception for this project, which I finished before Thanksgiving, because it provides an interesting comparison to the Hufflepuff Houndstooth Scarf. 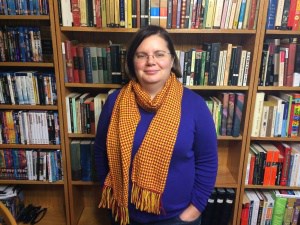 I wanted to post this project specifically because I used the exact same yellow yarn in this scarf as I did in the Hufflepuff Houndstooth Scarf, but because the second color is a different yarn — black in Hufflepuff and cranberry in Gryffindor — the yellow looks a little different.  Here’s a couple pictures of the two scarves side-by-side: 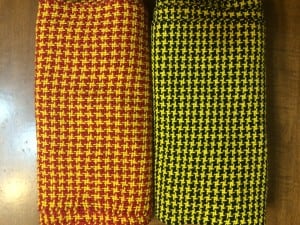 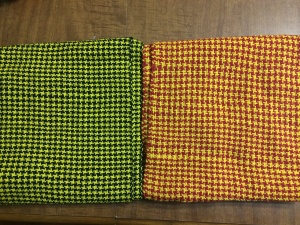 Since I started learning to dye last year, my color preferences have expanded.  Before I did any dyeing, I would pretty much stick to cool, jewel-toned colors with some neutral blacks and browns and sometimes red.  If you asked, I would have told you that I would never wear yellow or orange because they just would not look good on me and I just don’t like those colors anyway.  When I started dyeing, I surprised myself because I found some of the oranges to be stunningly beautiful.  Now these scarves showed me that it isn’t just dye that can change colors.  Colors change based on their companions.