While I was at The Knit and Crochet Show, more than one person commented to me that they couldn’t take classes the entire time because it was too much for them to absorb.  Wasn’t I totally overwhelmed?  Nope, not at all.  The entire event was an adrenaline rush and I enjoyed every moment.  A week after I got back, after reliving the entire event through writing the blog posts about it, I crashed.  This wasn’t all because of the show; August is break month for the Harry Potter Knitting / Crochet House Cup.  I push myself hard during the term, achieving feats of crafting that I otherwise wouldn’t attempt, and I appreciate break month!  Don’t get me wrong — I still crafted and had fun adventures in August and September to date.  Here’s the highlights.

My cousin’s daughter turned 5 and had a birthday party at the zoo.  It was the largest kid’s birthday party I’ve ever attended — 28 kids and 30+ adults.  I made fondant cupcake toppers (I don’t think I’ve mentioned here that I’ve got mad cake skills?  I don’t make cakes as often as in the past).  Since I live 2+ hours from my cousin, she bought cupcakes locally and I put the toppers on when I arrived at the party. 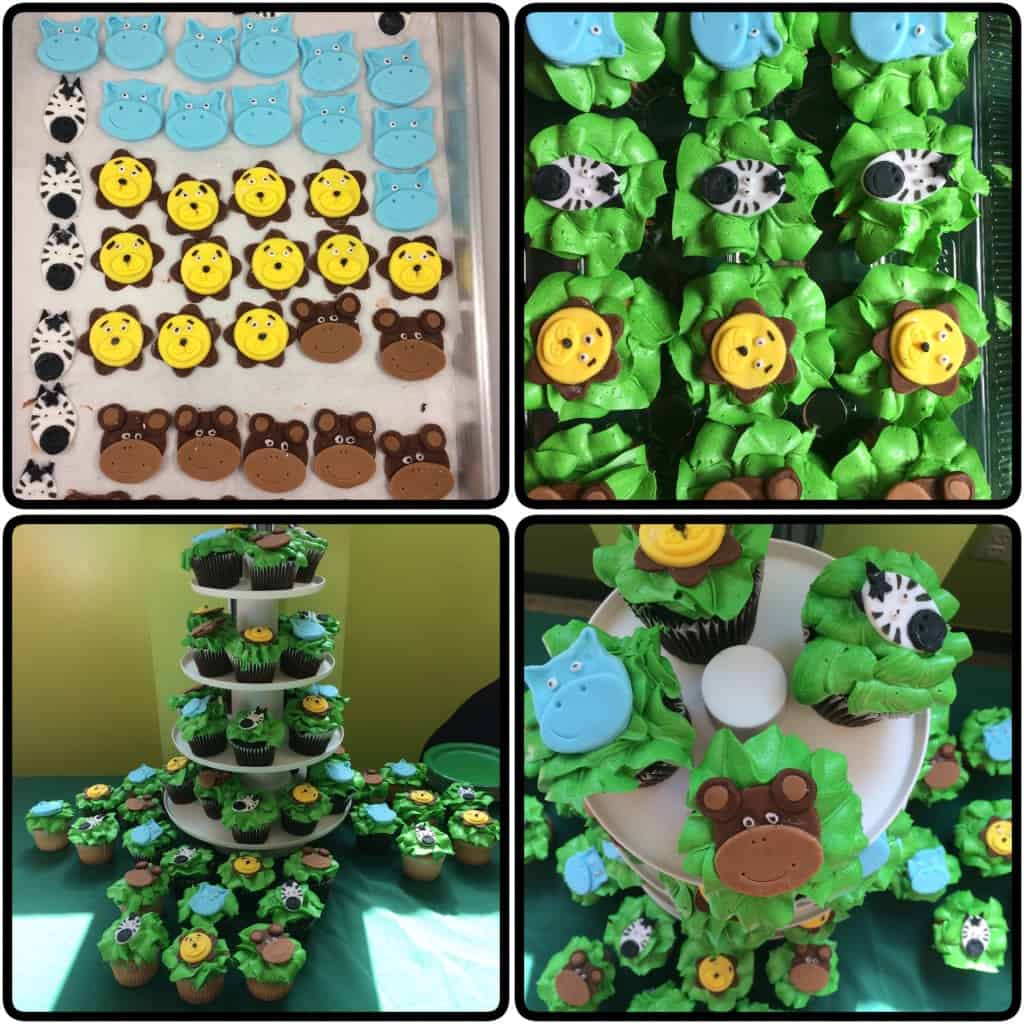 Birthday party at the zoo = live animal show and tell!! 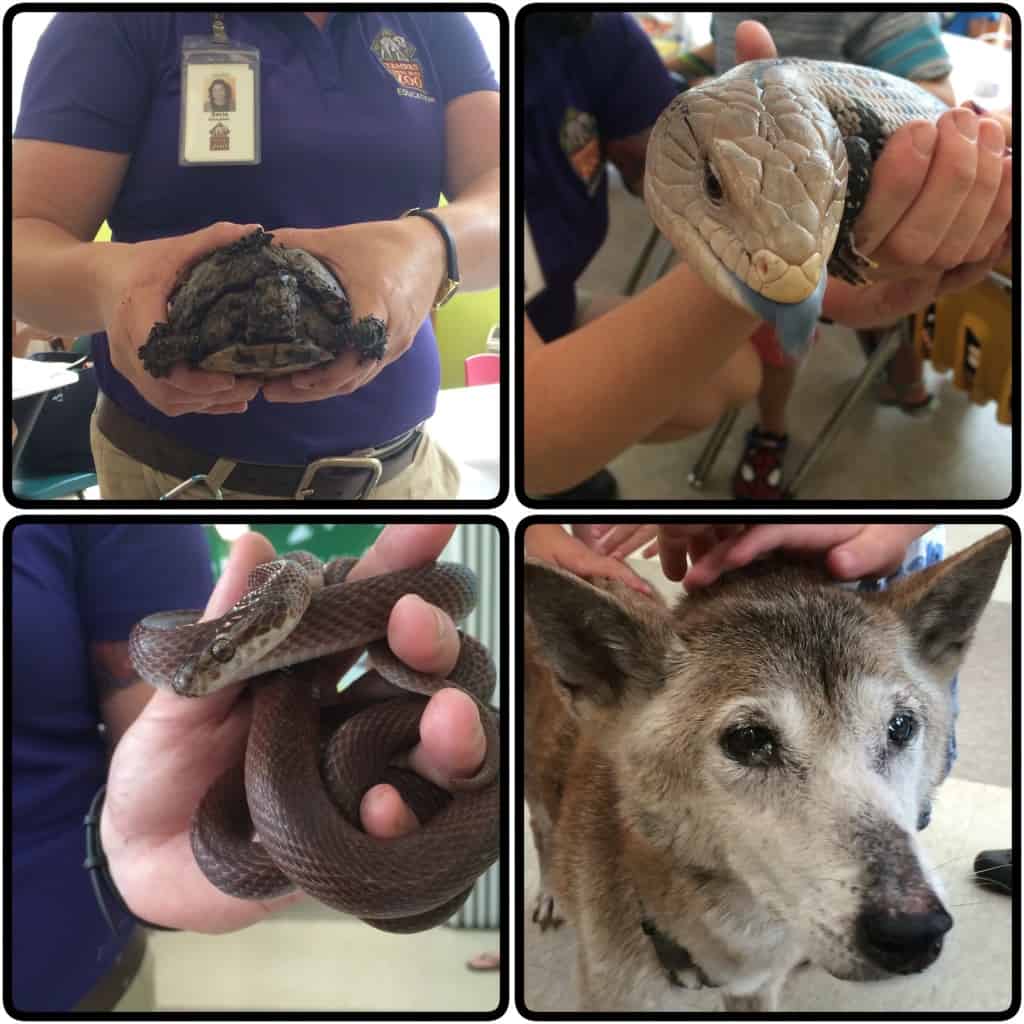 And I was the first person in line to get my face painted.  I got to the party early so I could get those cupcake toppers on the cupcakes and the few children already there showed no interest in getting their face painted.  I figured I’d beat the rush! 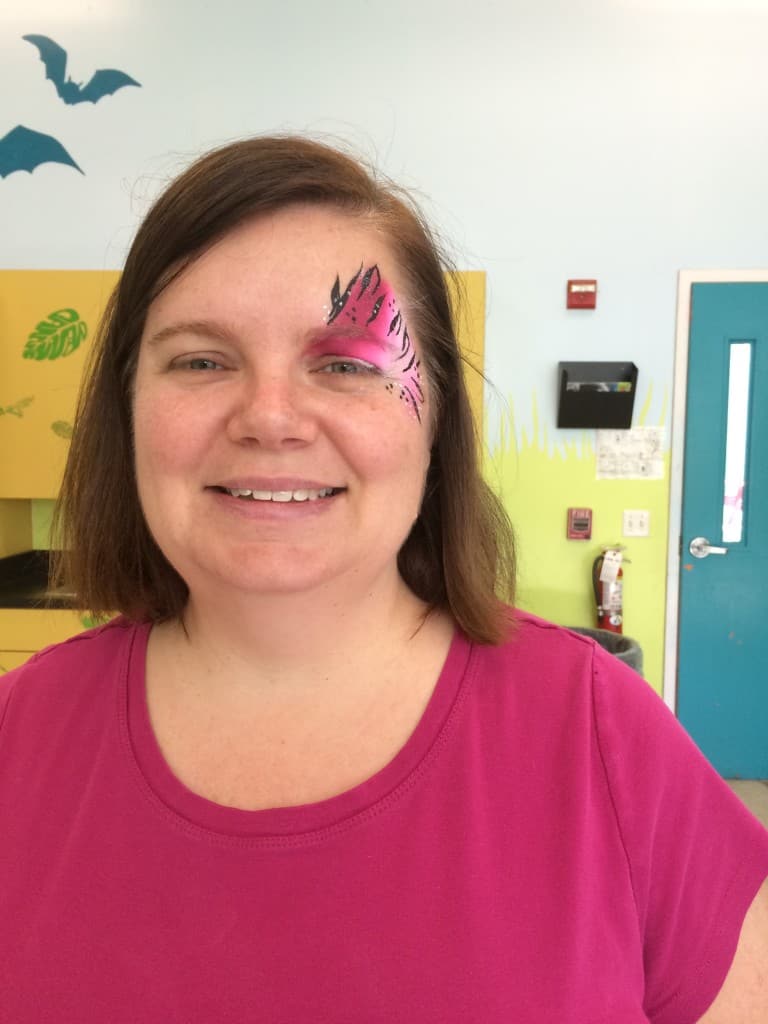 I knit the birthday girl a Barbie dress. 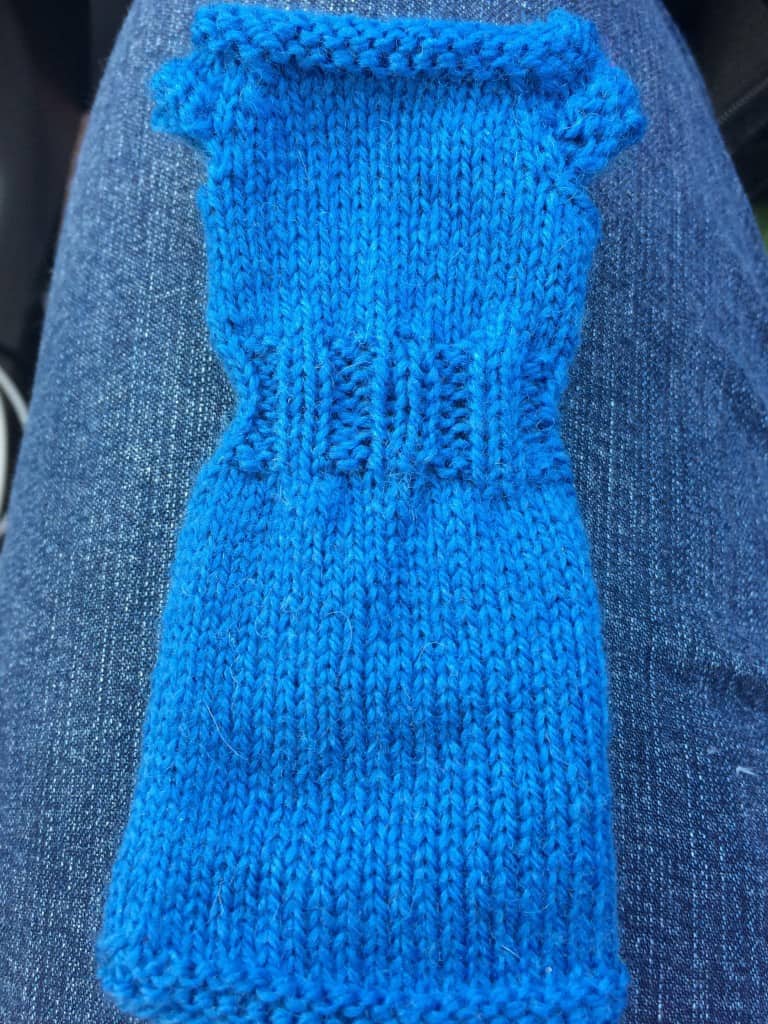 A few months ago, my friend Nancy and I went to the home of a member of the weaver’s guild who had passed away (see my blog post).  She wanted her yarn to benefit the guild.  Nancy and I sorted it to pick out anything that was suitable for demos.  We always have a little takeaway for kids and are constantly on the look out for yarn for those.  We packed up any project kits or yarns suitable for weaving and brought those to the guild’s annual auction.  The money raised from the sale of those yarns is designated for demos and will be used to buy yarn for takeaways once we use up our current stash. 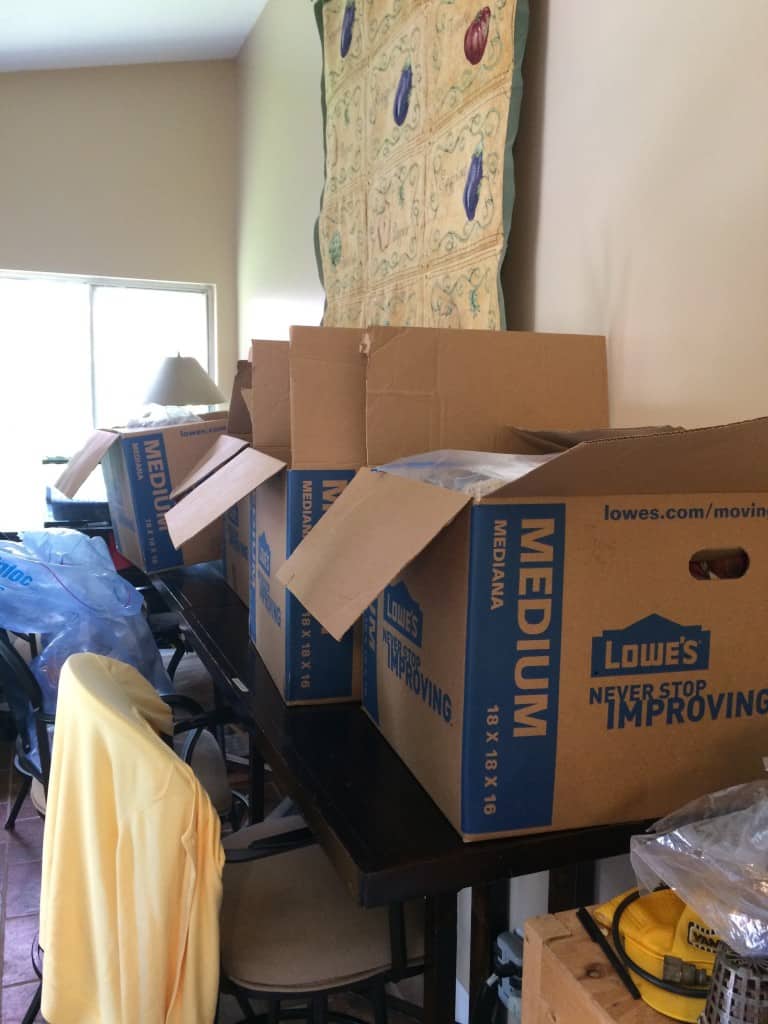 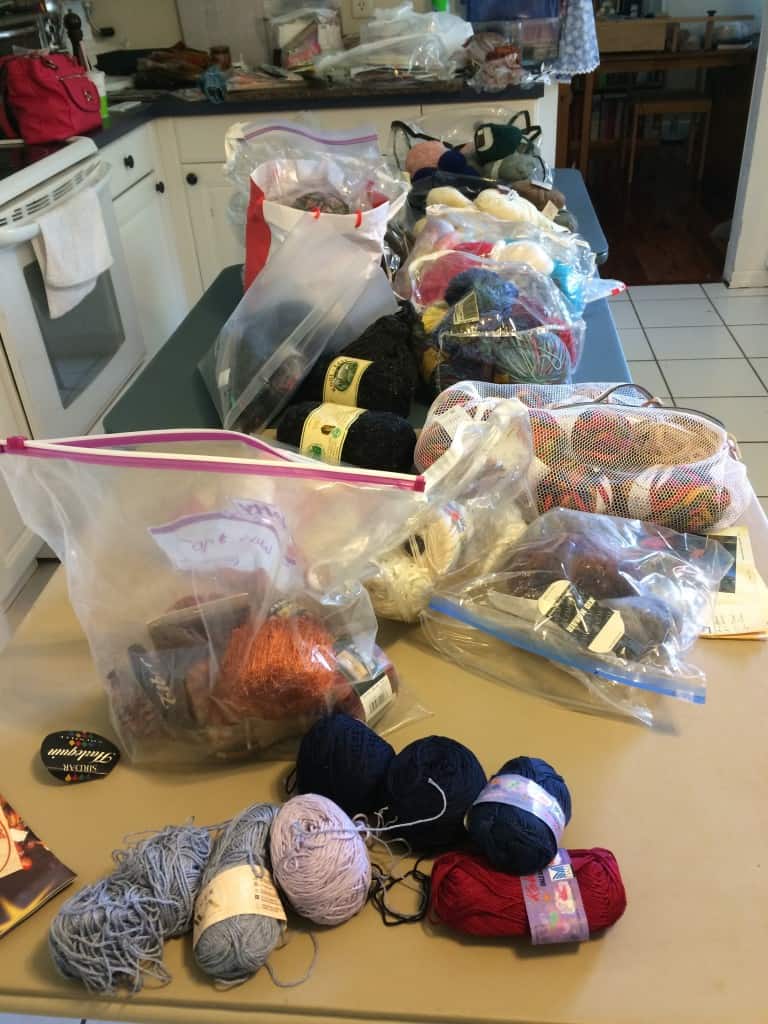 From the Weavers Guild meeting, I went straight to the Orlando Shakespeare theater for their annual open house.  I’ve never made it to this event before and had a great time.  I went to all three panel discussions — one on lighting and sound production, one on building props, and one with the directors and educators about visioning and producing individual plays and the future of the troop.  They also had a small display of props and costumes from previous productions.  Here’s a small selection of the spectacular costumes, which are created in house, in conjunction with the theater department of a local university, and with the help of many volunteers. 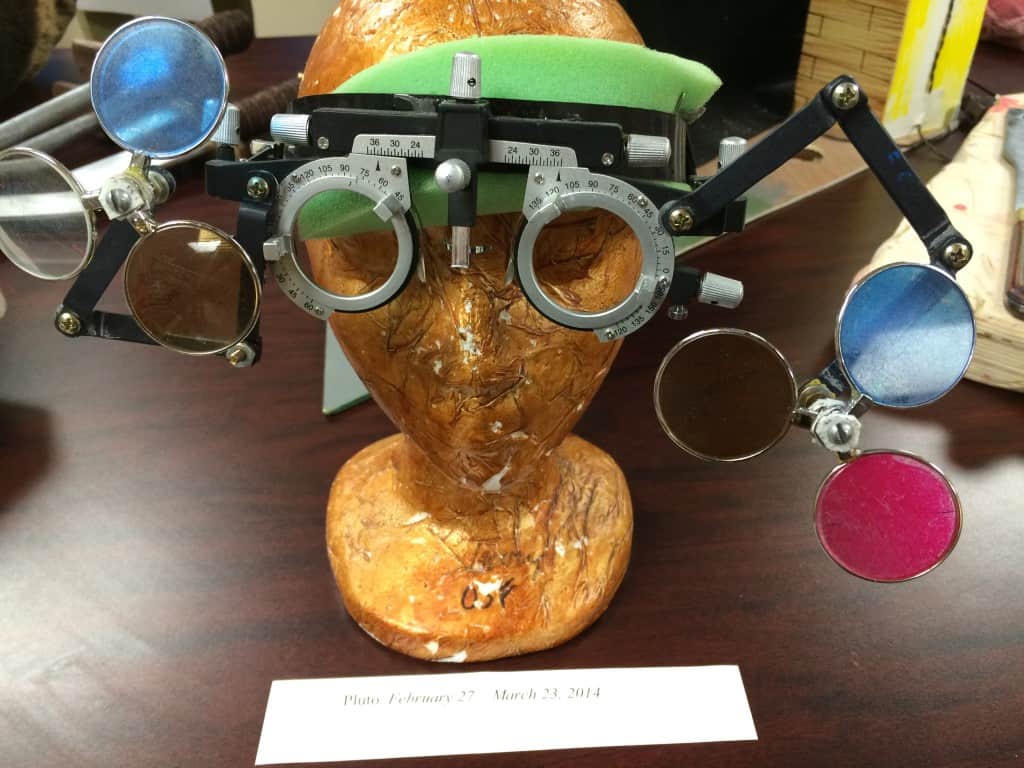 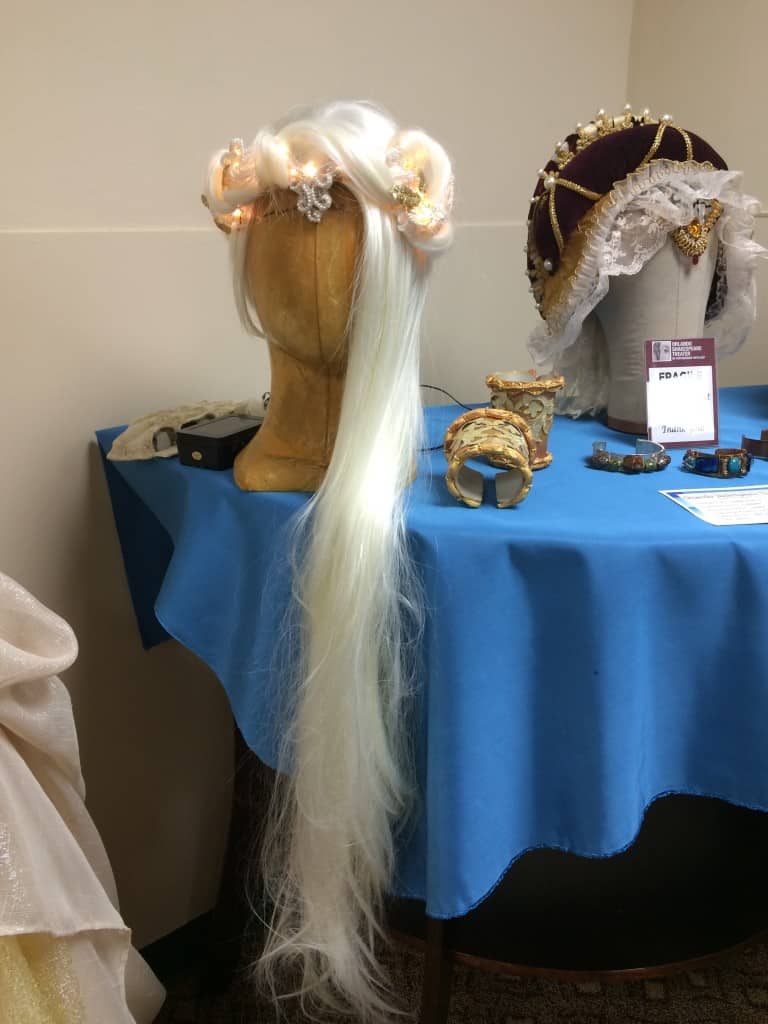 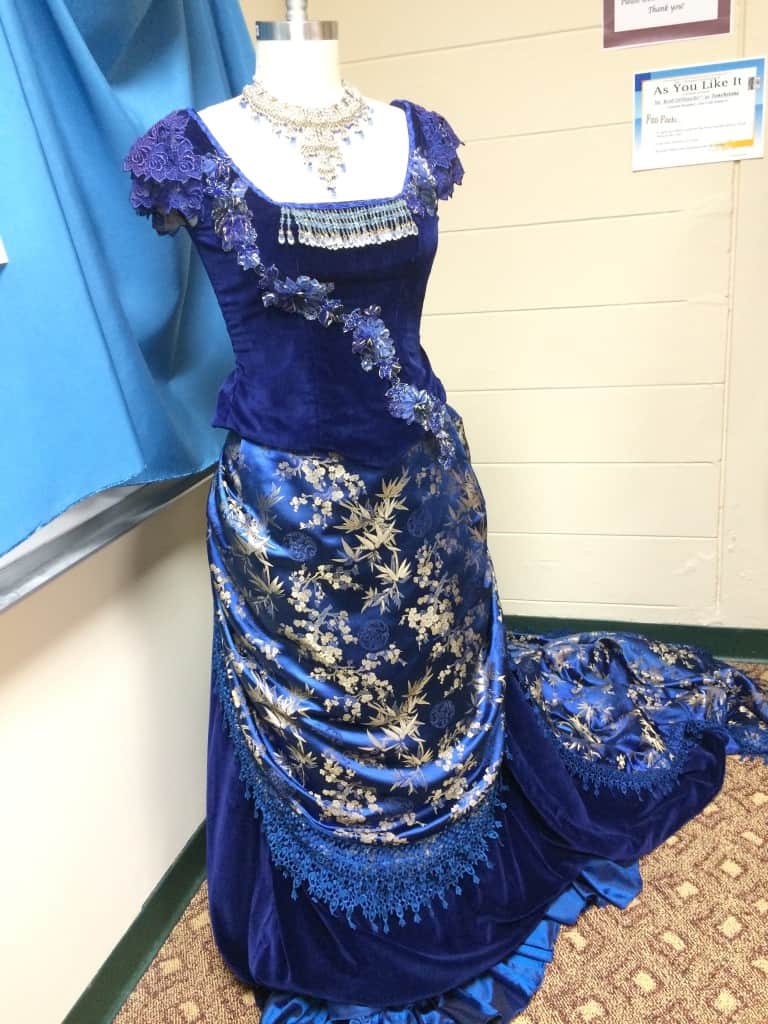 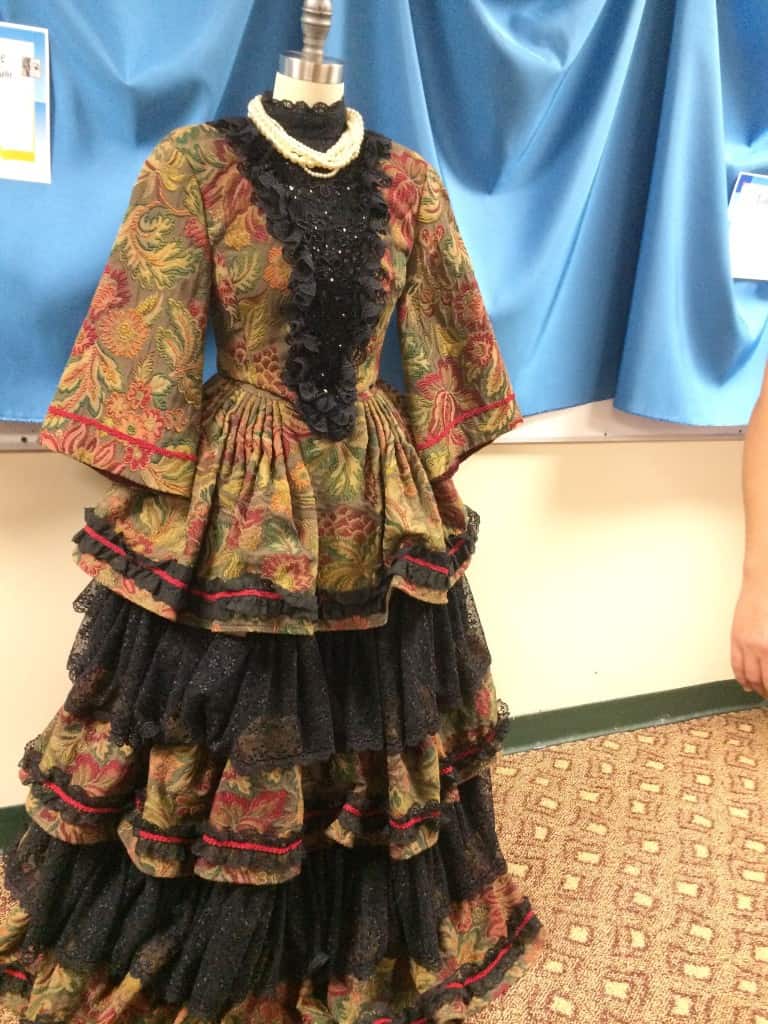 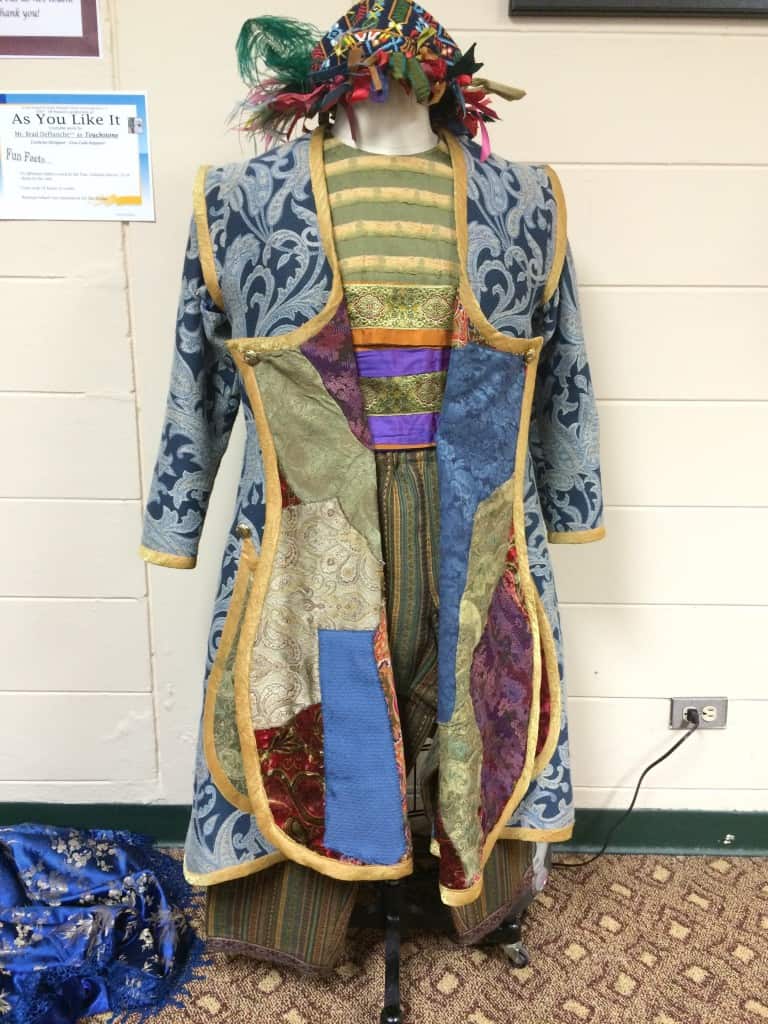 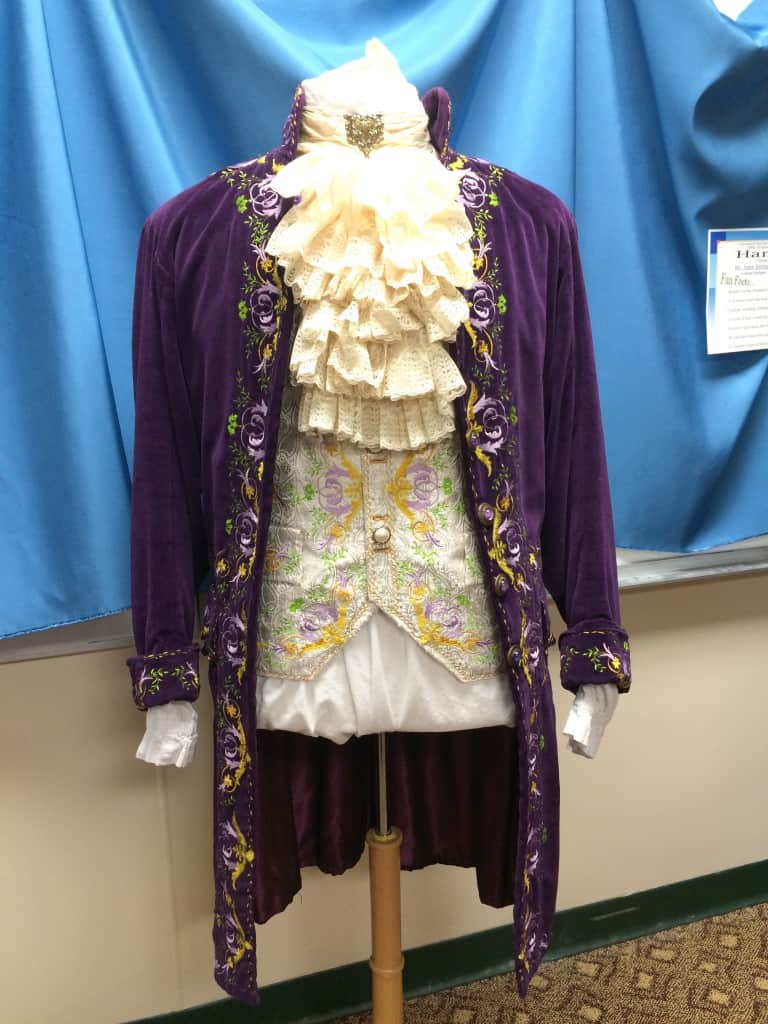 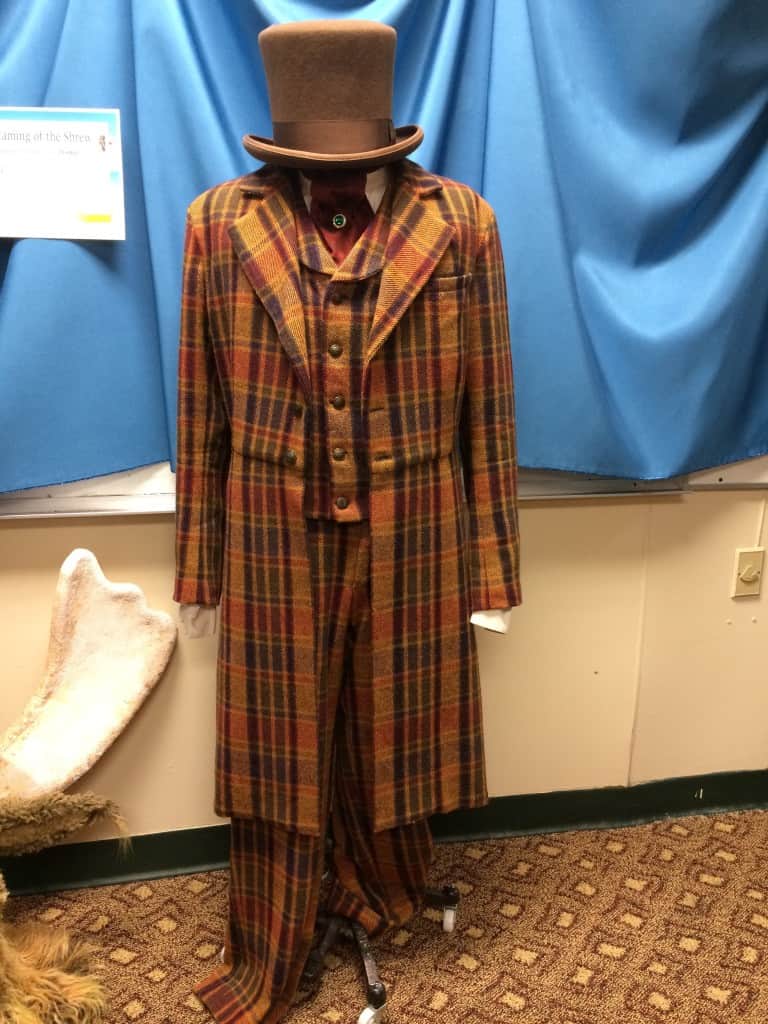 My order from Akerworks arrived!  I got 6 bobbins for my wheel (one in each style) and 3 drop spindles (one in each size).  I didn’t take pictures before they got pressed into service, but I’m sure you’ll see pictures in future blog posts.  I did take a picture of the lovely hand-written note Adan included in the box. 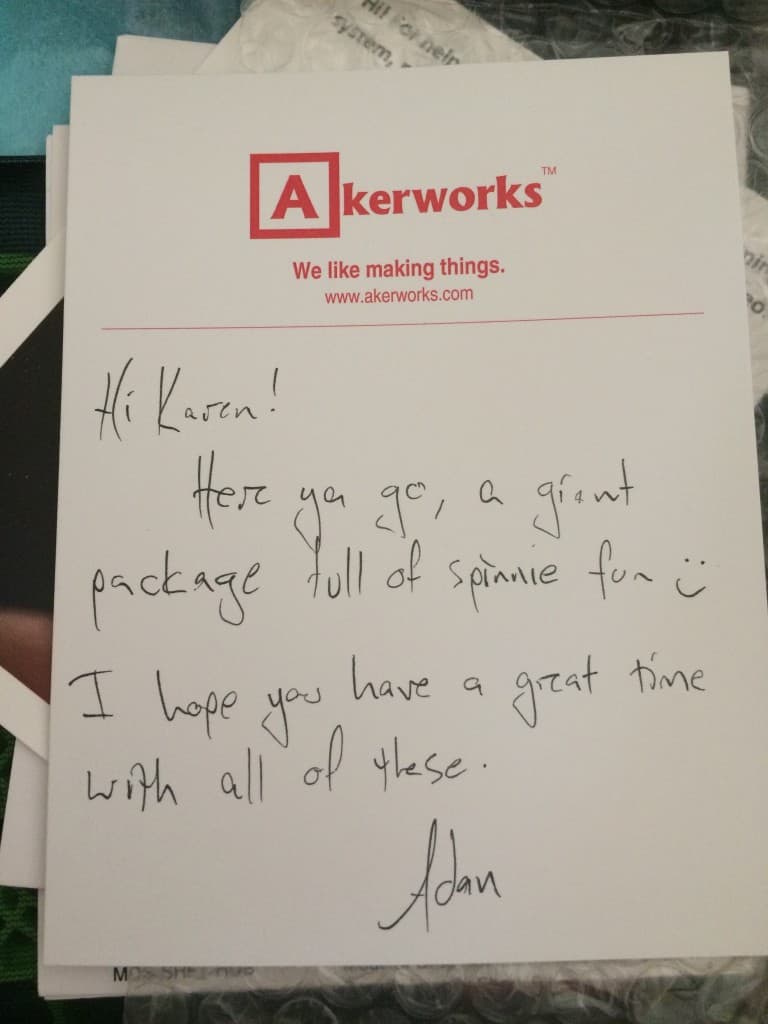 I accepted a position as blog mistress for The Ravenclaw Aerie, the blog for the Ravenclaw Tower in the Harry Potter Knitting / Crochet House Cup.  This is a big part of the reason for the neglect of my own blog; planning and executing for that blog has taken the time I had for blogging.  Now that we’re on a schedule over there, I expect to be back to my own blog regularly!  Most of what’s on The Ravenclaw Aerie is probably only of interest to those in Ravenclaw Tower or the Cup, but one of the first posts is about something else I did in August.  Ravenclaw Porcupine Snuggles works at the National Aquarium in Baltimore.  She and two of her colleagues drove from Baltimore to New Smyrna Beach, FL to release Cougar, a Kemp’s Ridley sea turtle.  I met them in New Smyrna Beach so I could witness the release, and Porcupine Snuggles and I wrote a blog post about it for the Aerie.

My friend Beth came on vacation for a week and we spent lots of time at Disney!  We ate at the Be Our Guest restaurant in the new part of Fantasy Land in the Magic Kingdom.  We did not expect to be able to get a reservation because this restaurant, the interior of which is a replica of the castle in Beauty and the Beast, is sold out 6 months in advance.  We checked anyway; someone must have cancelled because we got a 1:15 pm reservation!  The restaurant is stunning inside and out. 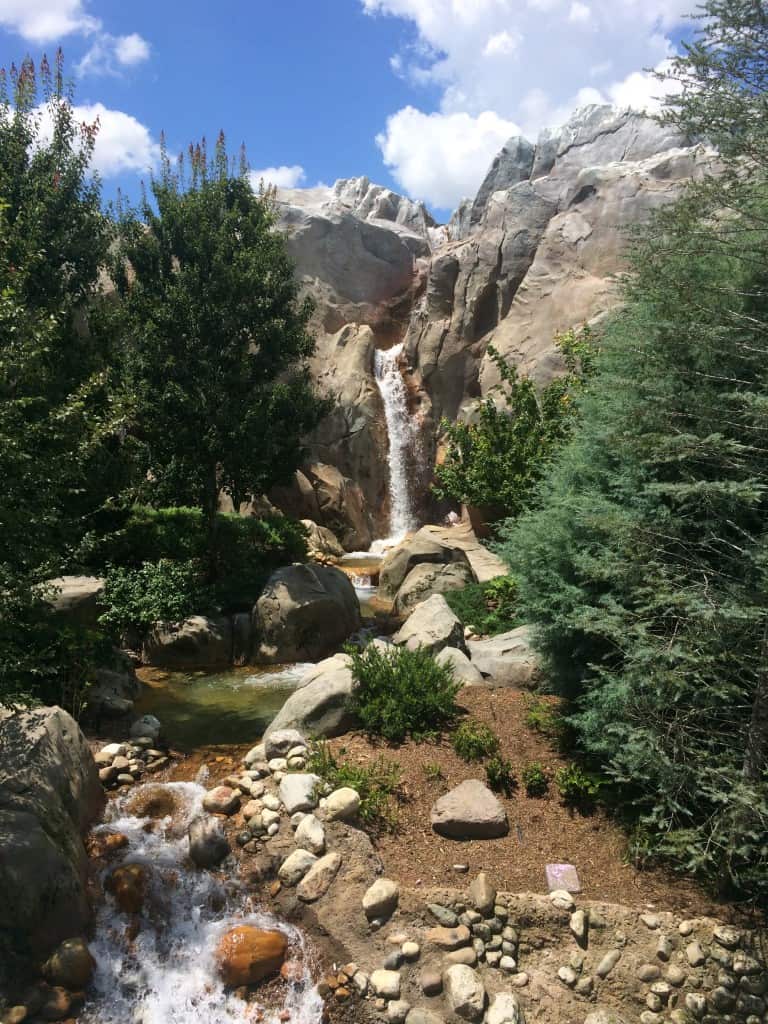 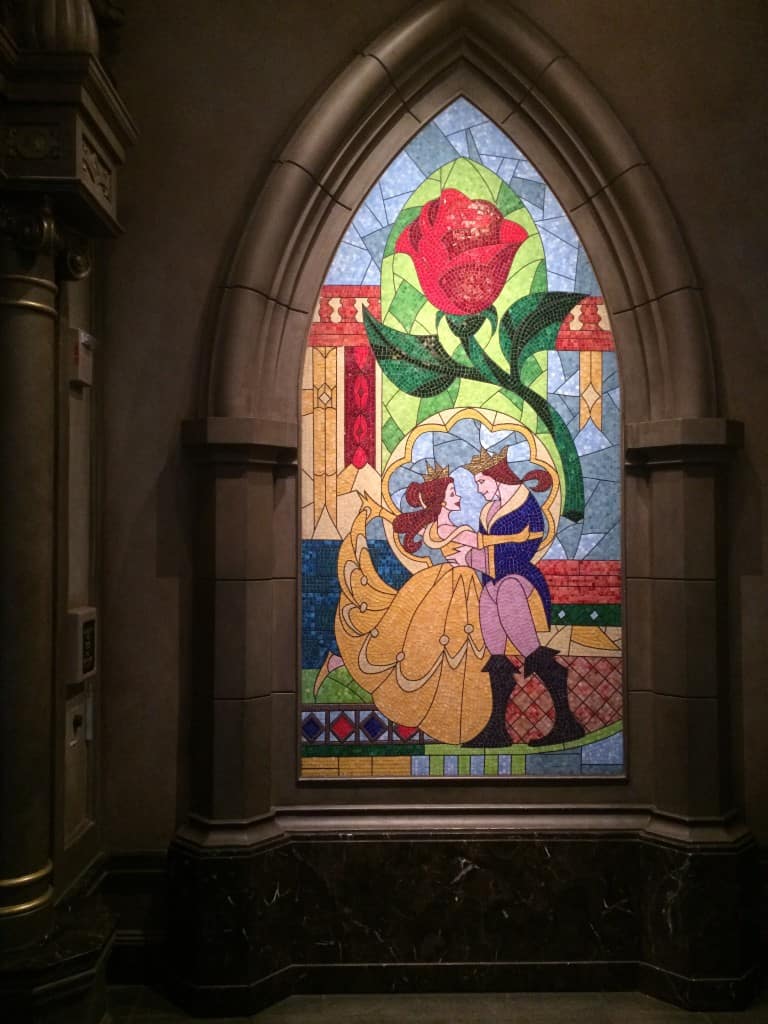 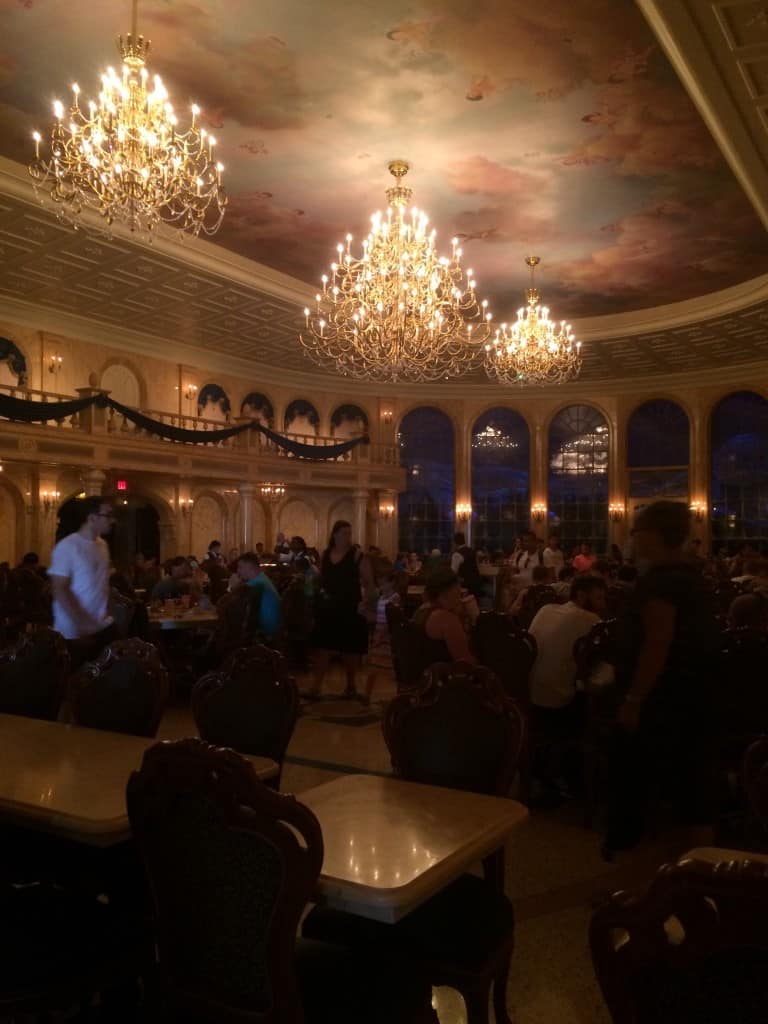 All the rain made for a beautiful sunset!

A couple days after Disney, my husband got sick with a very bad cold.  I caught it from him and it turned into a sinus infection.  Yuck!  For the last week of August and the first week of September, we took turns feeling misearable.  Not much got accomplished around here.  I was coughing so much that fiber crafting wasn’t even viable 🙁

Fortunately, I felt better in time to fly to New York City for a long weekend celebrating my sister’s 40th birthday.  Before she arrived on Friday evening, her friends and I went to the Global Fashion Capitals exhibit at the Fashion Institute of Technology Museum.  Here’s a couple of interesting pieces from that exhibit. 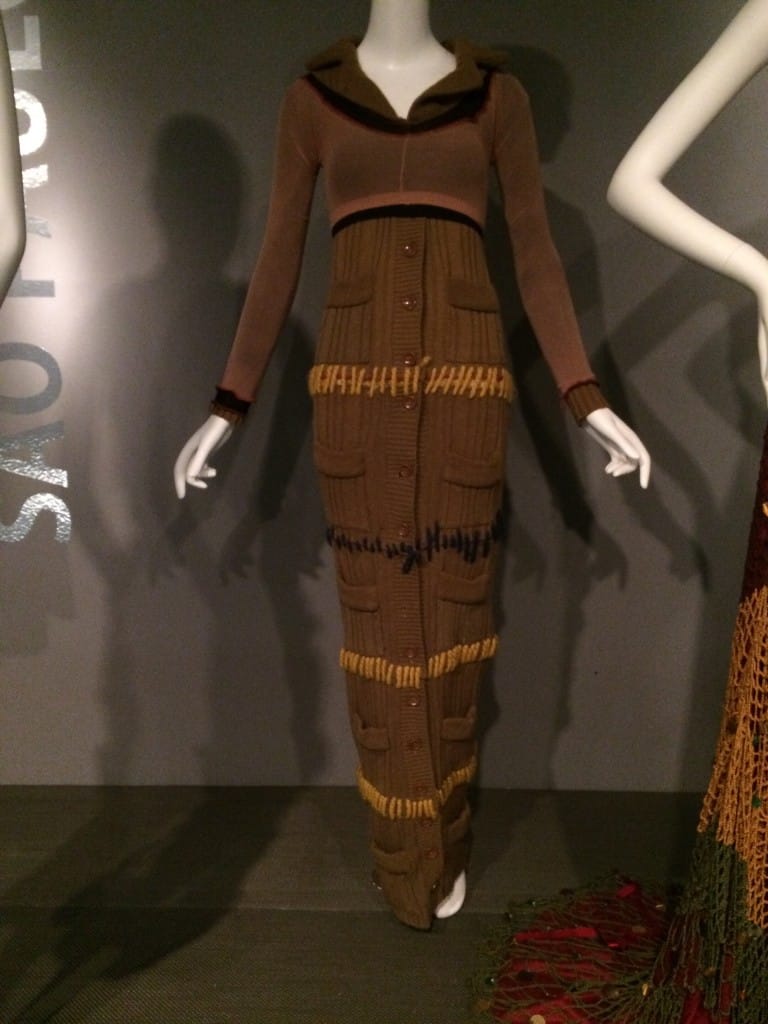 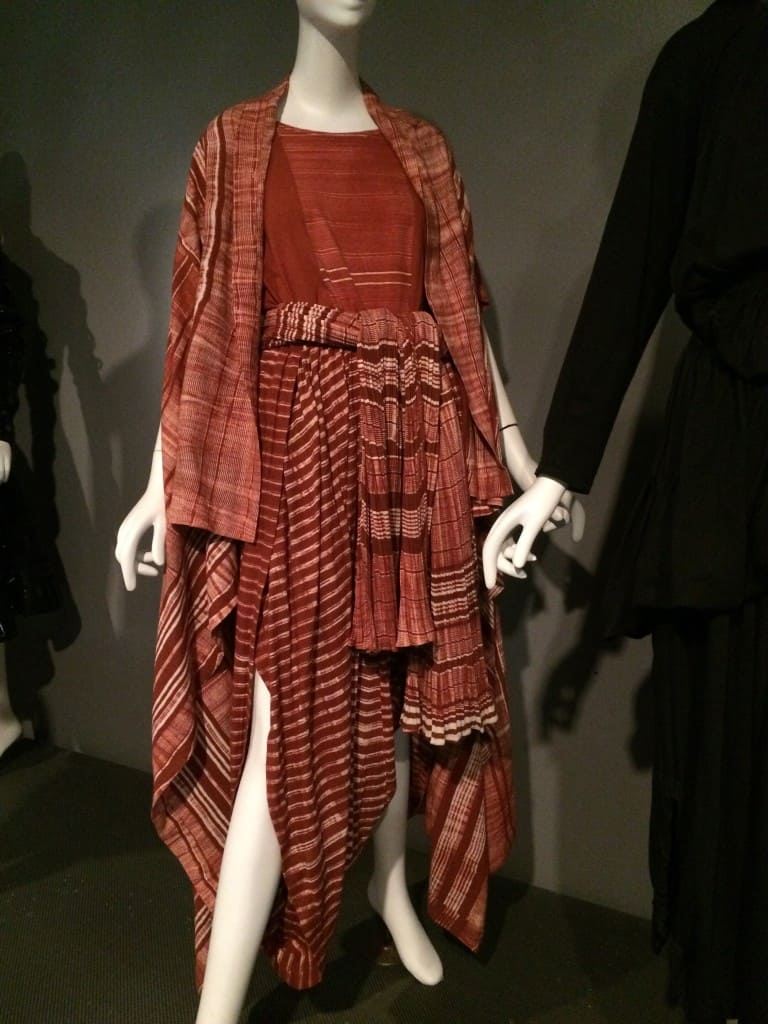 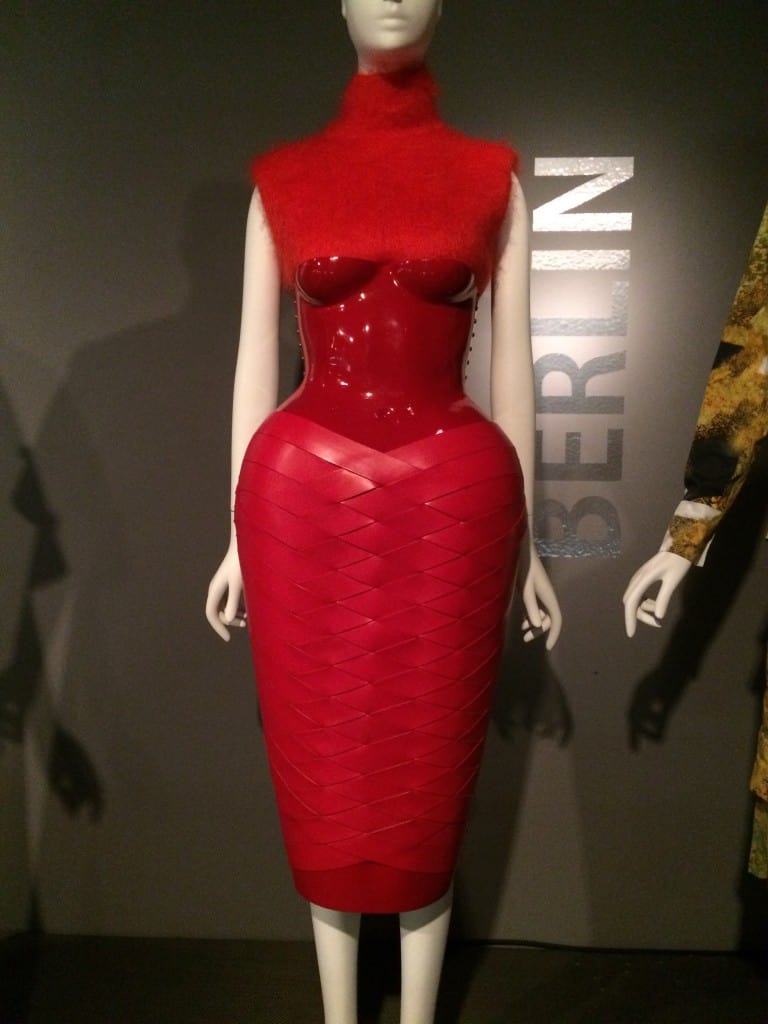 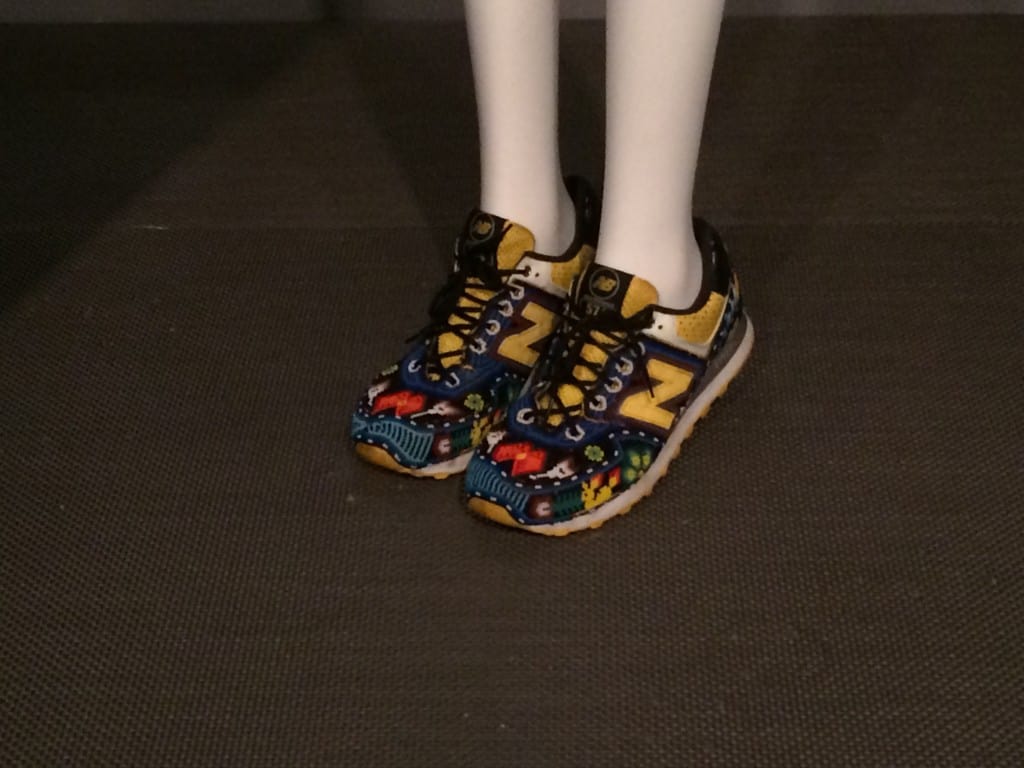 We were trying to decide what to do next when I saw someone walk by with a Mood bag.  For those who aren’t familiar with the name, Mood is a fabric store and is the place contestants on Project Runway shop for the fabric used to make their creations.  We decided to go to Mood and since it was a lovely day we walked the 10 blocks to the shop.  I was totally overwhelmed by Mood.  On the ground floor, there’s a two-story section of upholstery and other home decoration fabrics.  To get to the main shop, you take this old elevator, operated by an elevator attendant, to the third floor.  Once there, you have another 3 stories of every fabric imaginable.  I have no idea how the contestants manage to shop for fabric in only 30 minutes! 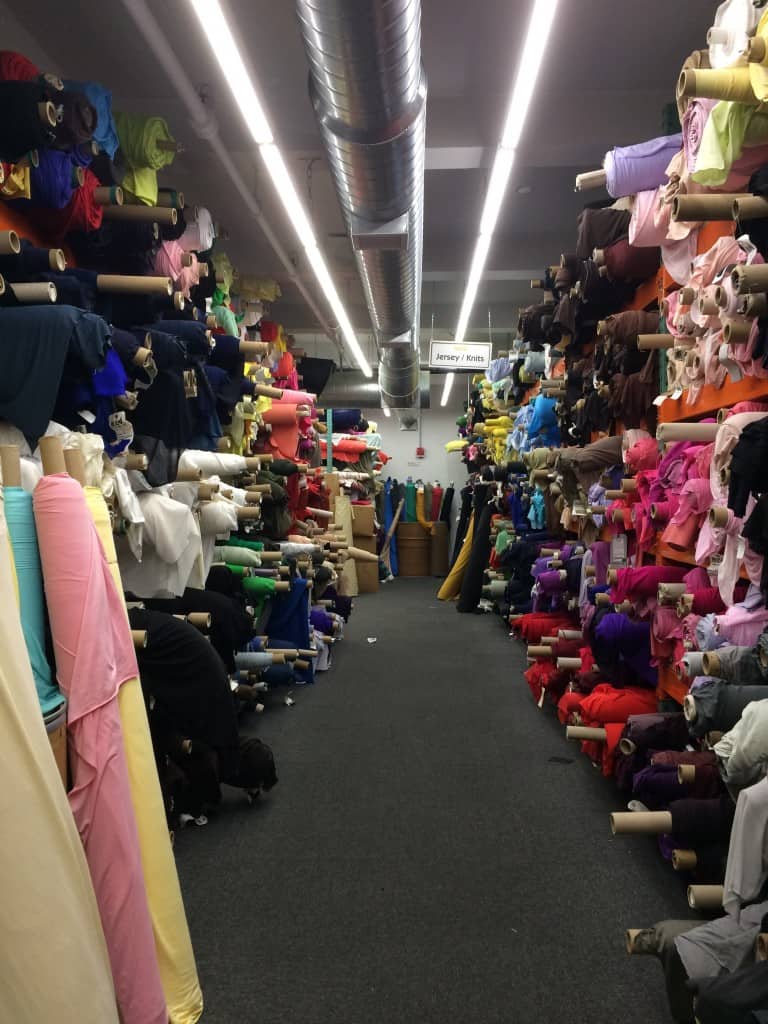 One day, we went to the Tenement Museum (no pix allowed there).  Our grandfather grew up in the Depression-era tenements of the Bronx, so this was a poignant visit for us.  Afterwards, we wandered around SoHo and I bought my first ever pair of Fluevogs. 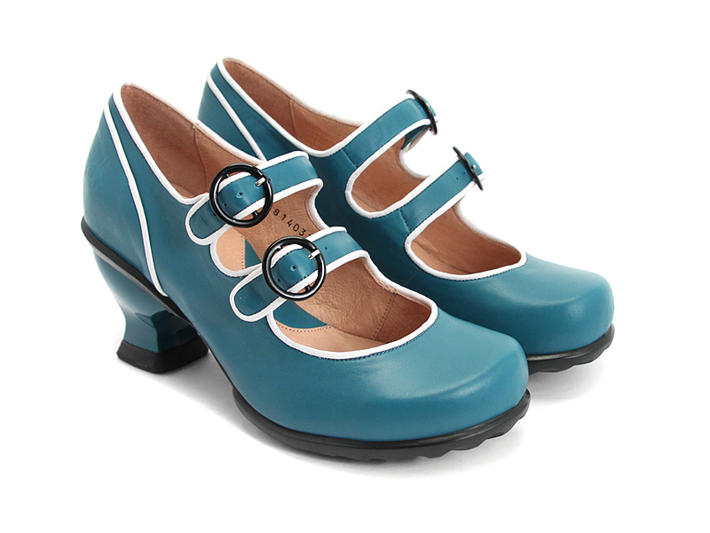 Later that evening, my sister and her friends went to a play.  They bought tickets before I committed to the trip, and I wasn’t able to get a ticket to the show.  Instead, I took a train out to Long Island to visit law school classmates and meet their 4-month-old baby.  It was good to see them!

The next day, my sister, her friends, and I went to the Cloisters Museum, and visited their famous room of unicorn tapestries. 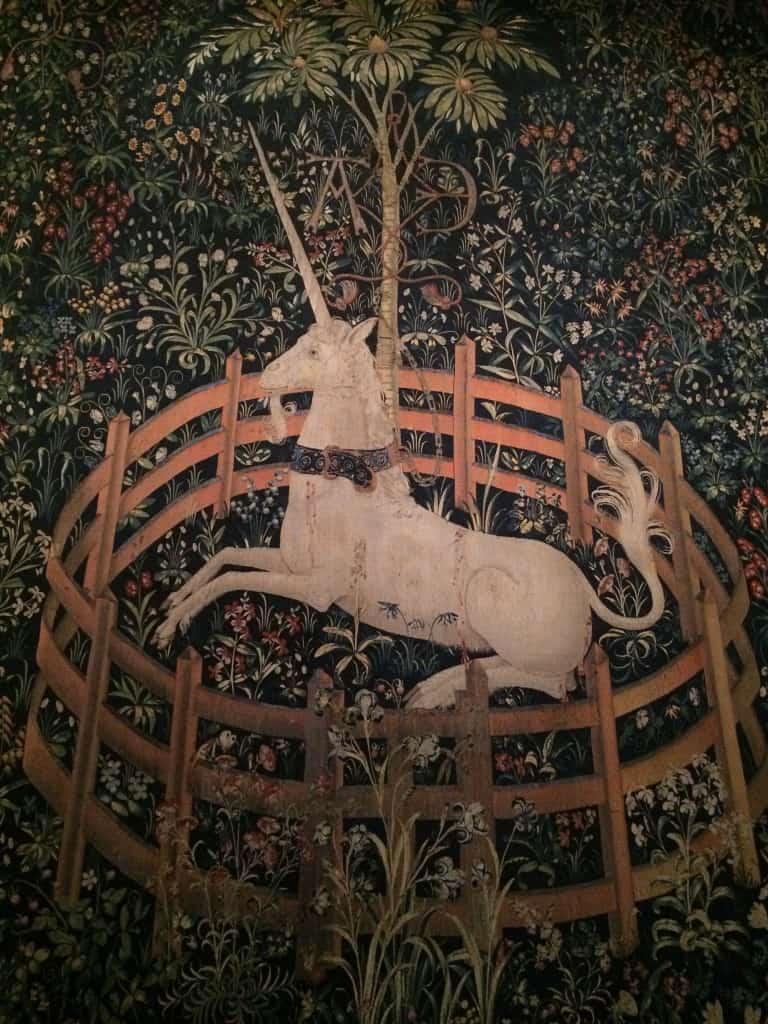 We ate fabulous food every day, including the best doughnuts I’ve ever eaten, from The Doughnut Plant.  The interior of the shop was adorable, with doughnut pillows on the wall, a doughnut tile backsplash, and donut chairs! 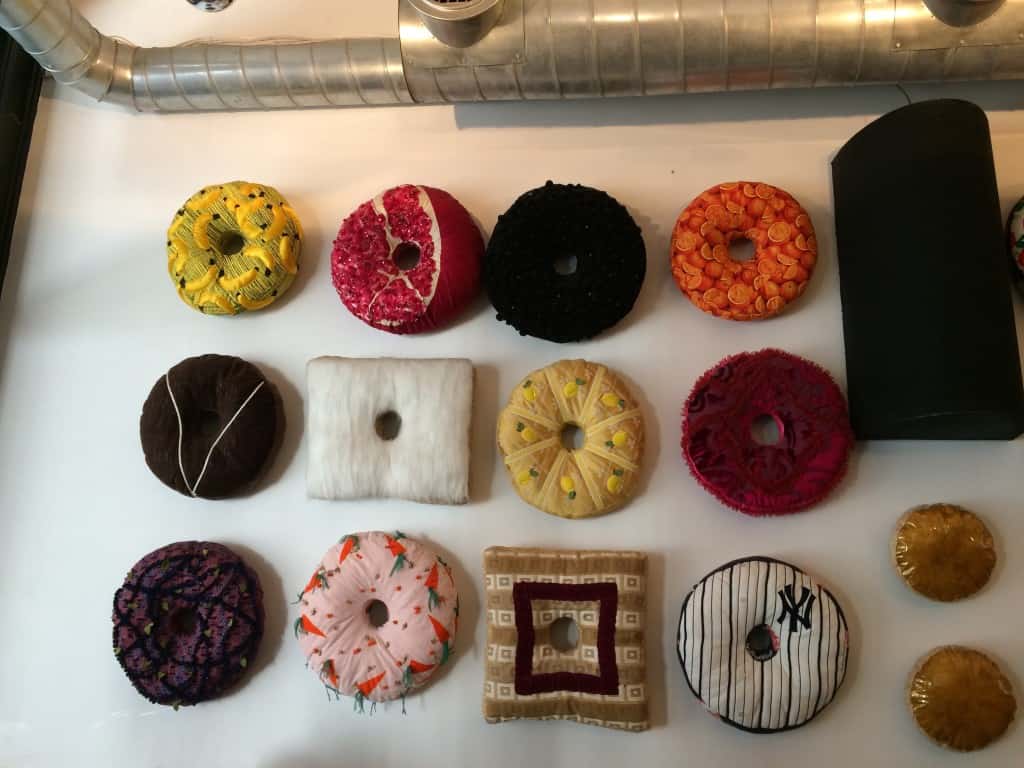 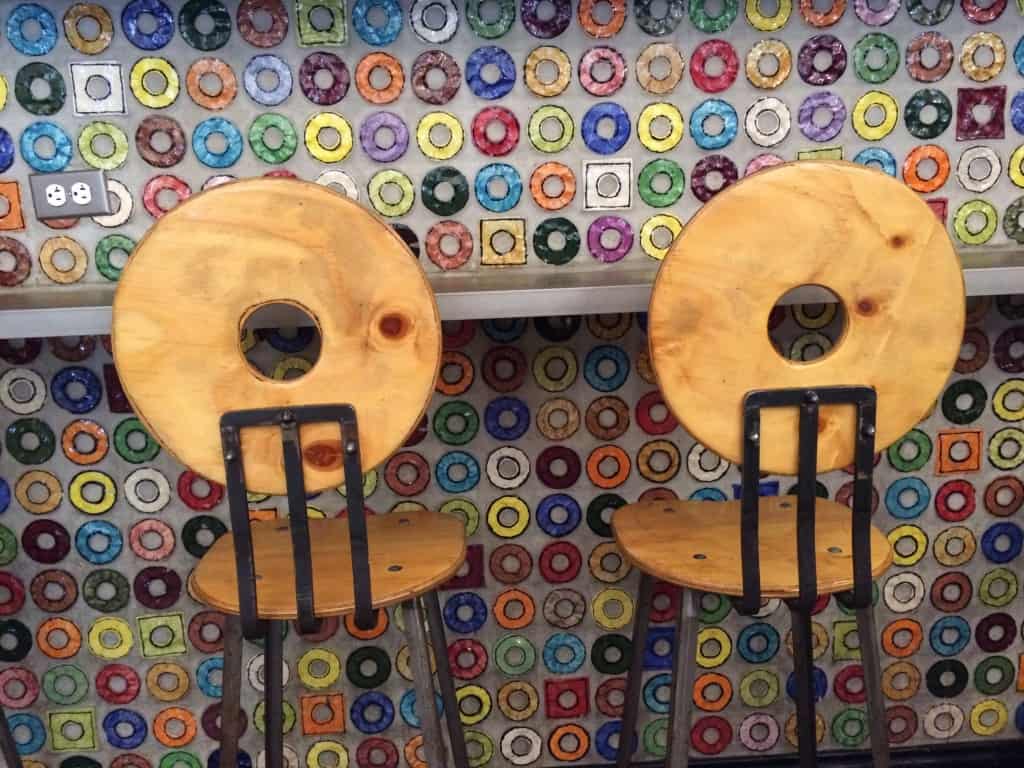 The last night, my sister and I stayed in her friend’s apartment in Brooklyn.  The friend was out of town, but gave us a key.  The apartment came with bonus kitty, Billie. 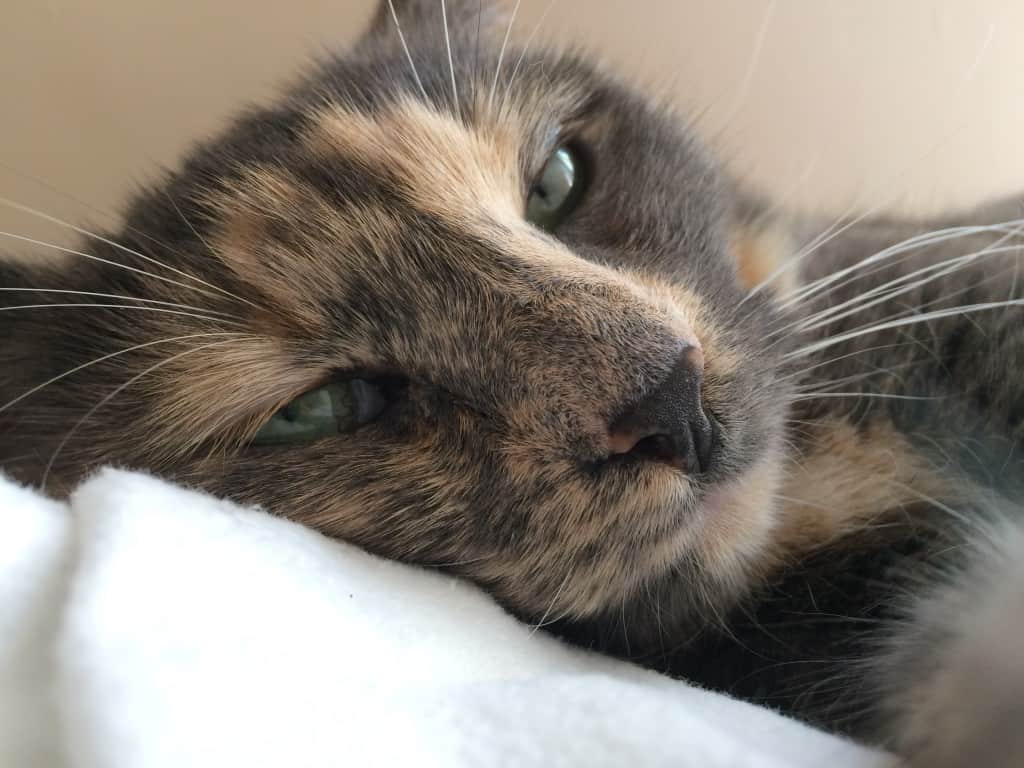 Billie was super sweet and reminded me of my Pepper, whom I still miss very much!

Although I lived in the Northeast for nearly 30 years, I had never spent more than an afternoon in New York City before this trip.  I had a wonderful time and hope I get to visit again!

For the fifth year in a row, Chris and I have season tickets for the Orlando Shakespeare theater.  The first show of the season was Spamalot!  It was absolutely spectacular.  If you have the opportunity, you should totally see this show. 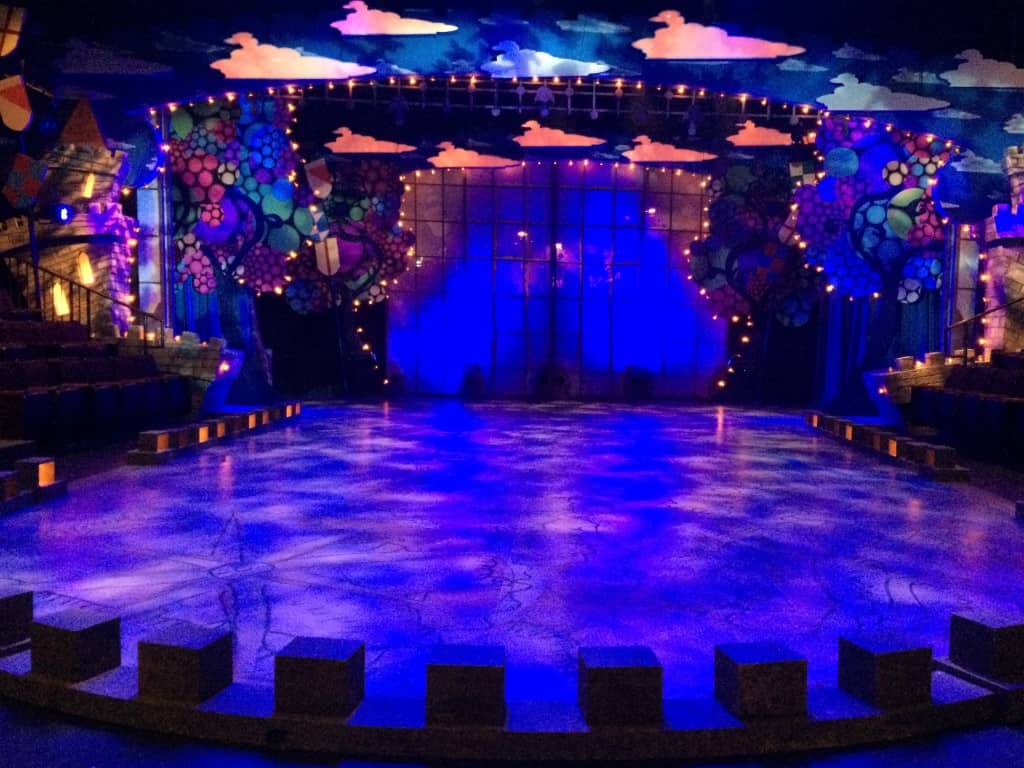 Last weekend was the Orlando Maker Faire.  The Drunken Monkey Spinners and Weavers of Orlando shared a booth for the event.  Nancy and I spent the entire weekend in the booth; other members of the two groups spent one day or the other. 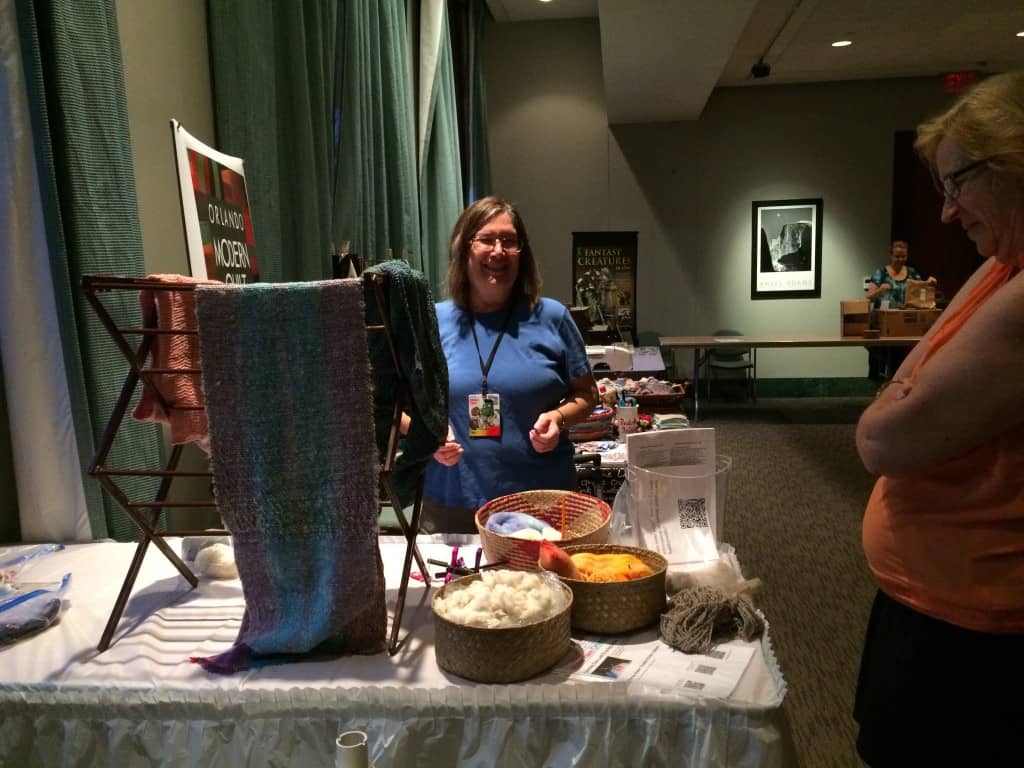 This was the fourth year of the Orlando Maker Faire.  Last year, they expanded from the Science Center and included some exhibits in the park.  This year, they expanded further, with arts and crafts exhibits in the Orlando Museum of Art, which is located on the opposite side of the park from the Science Center.  The expected attendance at this event was 15,000; I didn’t hear an actual number after the event, but it is by far the highest attendance at any event where I’ve demoed. 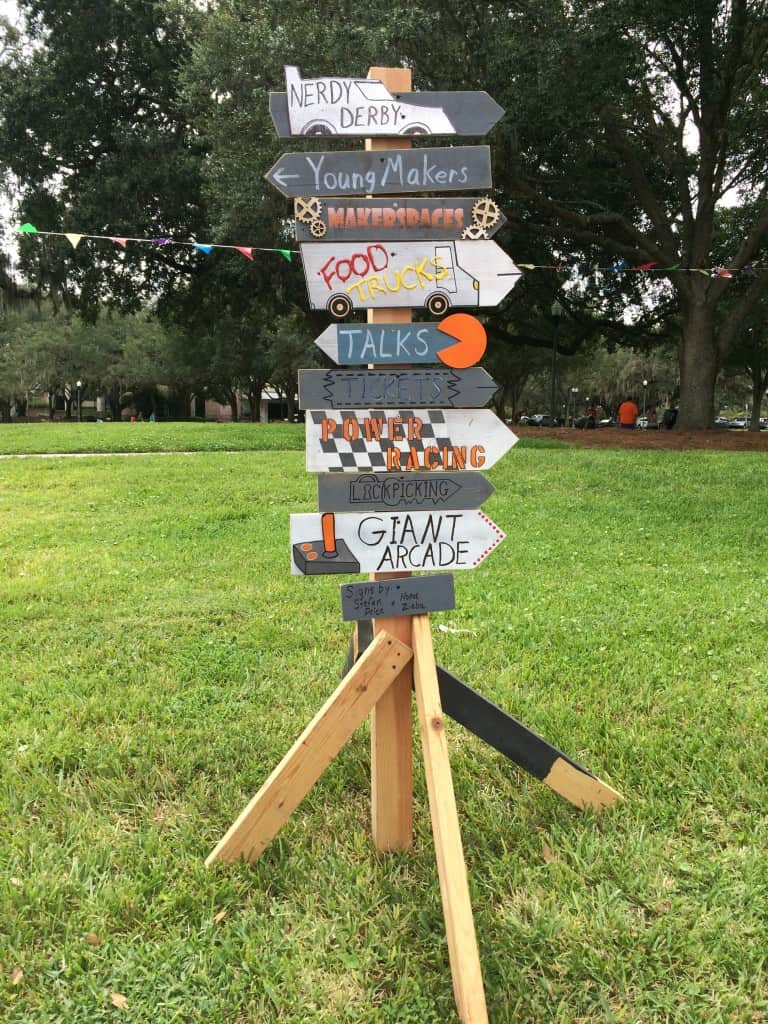 The Science Center was wall-to-wall people; the Art Museum, where we were located, was steady but manageable.  This was a fantastic event to demo.  The people coming to this events are makers themselves.  They like to know how things work and ask lots of questions!  I spun the 50/50 Camel Down / Silk that I bought from Red Fish Dyeworks at The Knit and Crochet Show.  I only got 1 ounce spun, out of 4, in the 17 hours I spent spinning!  This is partially because I talked to lots of people, but also because it is spinning very fine.

This weekend is the Florida Fiber In.  I went last night, but won’t make it there the rest of the weekend.  I picked up some Black-Faced Valois locks and some Bombyx Silk fiber, and spent a couple hours spinning and chatting!

The new HPKCHC term started on September 1 and I’ve been crafting like a mad woman.  I haven’t taken pix of anything yet, but I’m working on that today and tomorrow.  I’ll have a Year of Projects update post sometime tomorrow.

I have also been working on improving skills to benefit my blog.  I bought my first DSLR camera (a Canon 70D (affiliate link)) and a Pro-Am video camera (Canon XA-10 (affiliate link)).  I added Adobe Stock to my Adobe Cloud subscription.  I used my Lynda.com subscription to learn how to use Adobe Bridge, then used Bridge to move all my photos out of Apple’s Photos app and into their own folders on my external hard drive.  I’m still working on adding metadata and tags to the photos.  I had 19,000 photos and videos in Photos and have a very hard time actually finding anything when I’m looking for it!  It’s a lot of work to organize, but I believe it will be worth it in the end.  I’m just starting the Lynda.com courses on Adobe After Effects and Lightroom, to further improve my photography and videography skills.

So that’s the highlight reel of the last six weeks.  What’s your highlights?