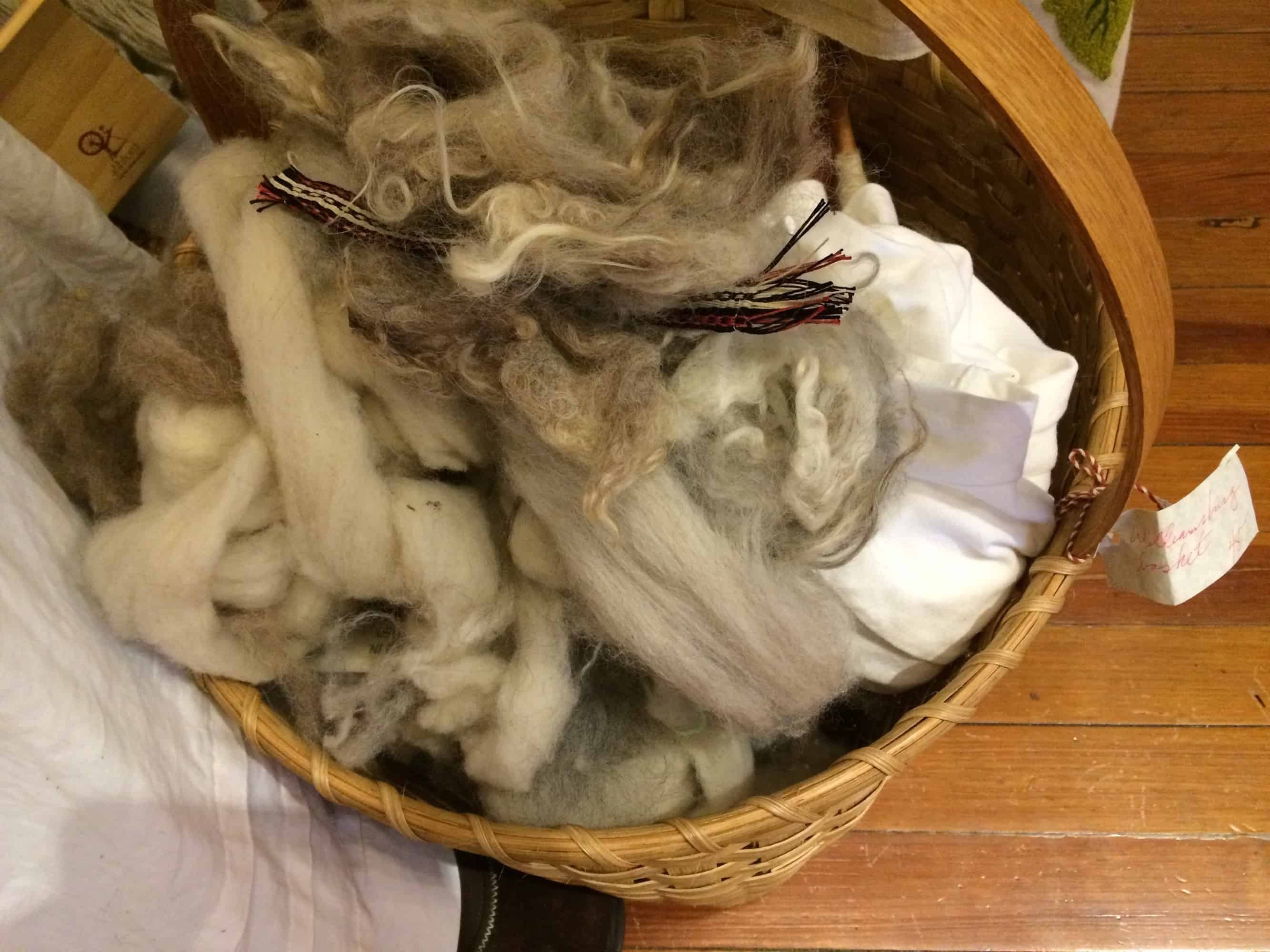 The St. Augustine, FL Textile Arts Guild holds an annual Spin In at the St. Augustine Visitors Center on the last Saturday of March.  I found out about this event last January, when I was in St. Augustine with my sister, and have been planning to attend ever since.  It’s about a 2 hour drive from my house, so I was glad that my friend Lorelle decided to join me!

The members of the St. Augustine Textile Arts Guild generally dress in Colonial-style clothing when they demonstrate.  I planned to make myself an appropriate outfit prior to the event, but with everything else that I had going on the last couple months, that did not happen.  I wasn’t too worried about it, because it isn’t a requirement of attending the Spin In.  I picked through my closet and came up with a long black skirt, white t-shirt, straw hat, and my Icarus shawl.  It’s not a recognizable fashion from any particular time period, but there’s something less than modern about the ensemble!

The Visitors Center has alcoves along the side, and the city’s demonstration ordinances required us to be in the alcoves or on a row of benches at the perimeter of the main room.  Here’s a couple pictures of everyone in the alcove. 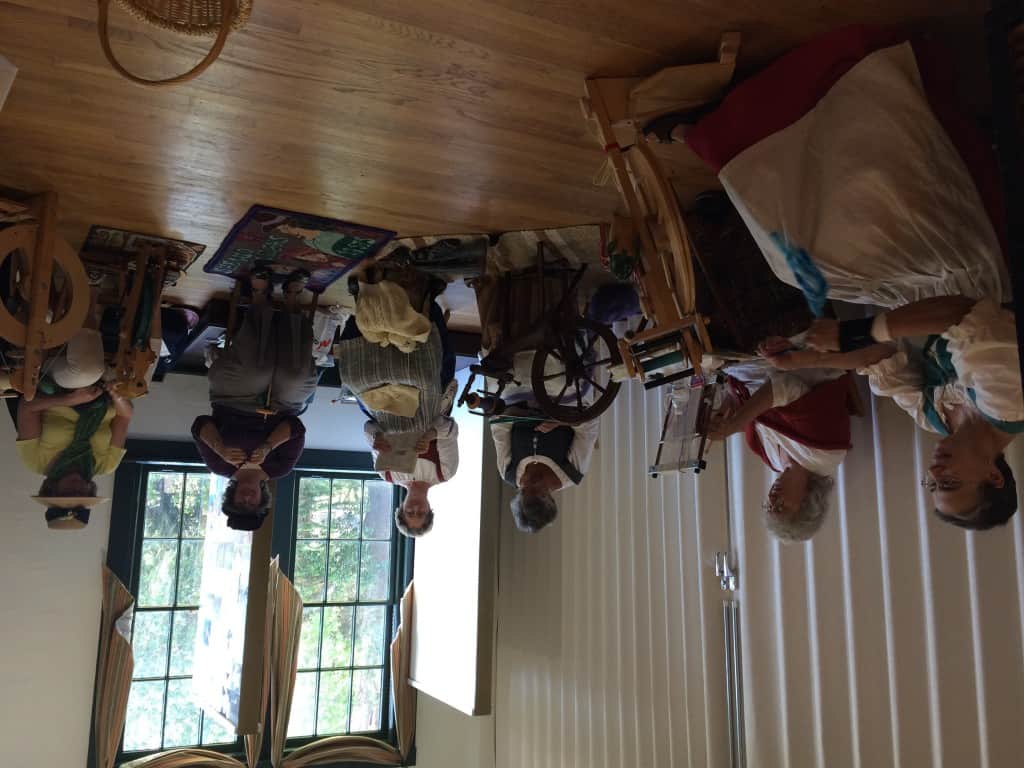 You can see my wheel on the far right of the first picture and I’m on the far left of the second picture.  Lorelle is beside me in the blue and white dress.  I wish I’d taken a better picture of her wheel.  She painted it herself, finishing it about 12:30 am Saturday.  She brought the wheel to this event in pieces and spent the first hour or so assembling it.  In this picture, it looks black or dark brown, but it is actually forest green with bright green and gold highlights.  It is beautiful!

The table in the second picture is full of tatting. 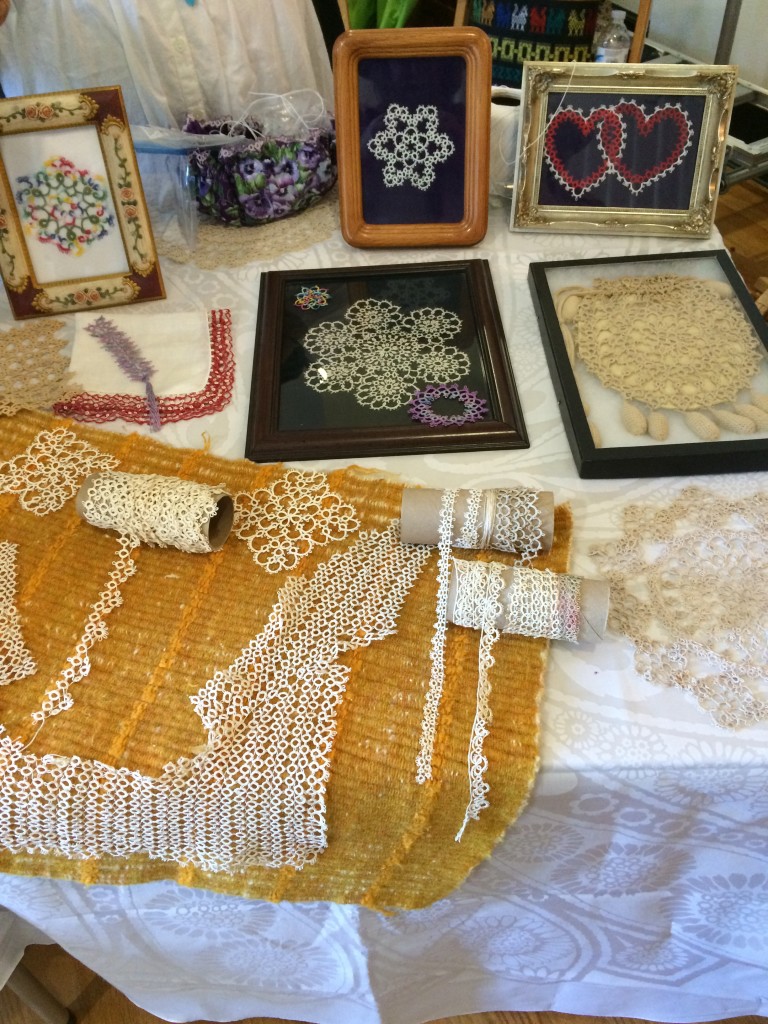 A few of these pieces were made by the woman at the table, but most are pieces passed on to her by her mother-in-law.  Most pieces date from the 1940s or 1950s, but a few, including the large collar on top of the yellow placemat, are from earlier in the 20th century.  This woman’s collection consists of hundreds of tatted pieces plus many vintage shuttles, crochet hooks, and more.  She only brought a few pieces to display at this event.  She spent the time tatting, using two shuttles.  I have only seen tatting with one shuttle and didn’t know it was possible to use more than one.  Apparently, some people use as many as 6 shuttles at a time! 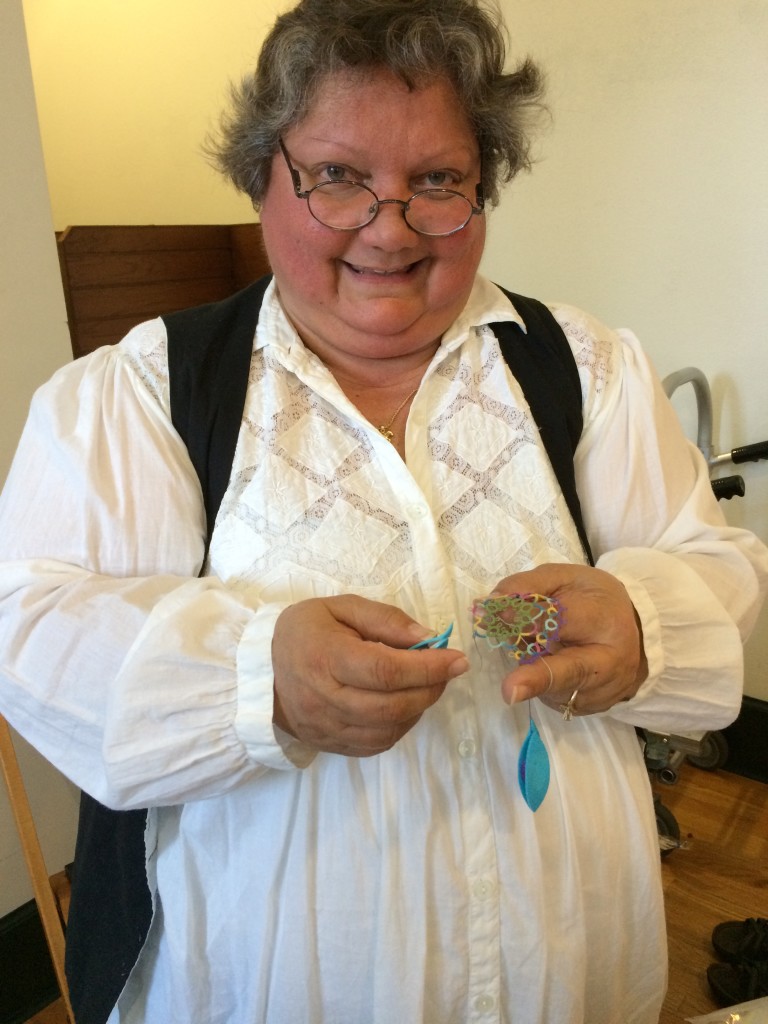 Other attendees were weaving tapestry (in the first group picture), knitting (ditto), inkle weaving (I didn’t get a picture), and carding. 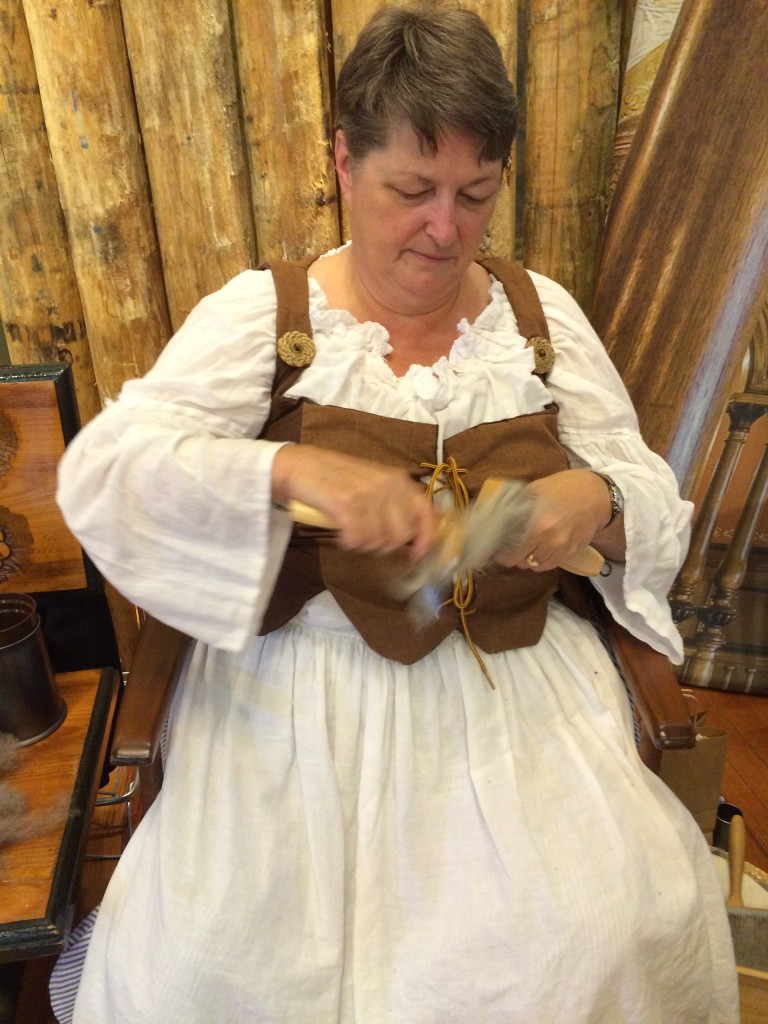 The Spin In was held from 10 am to 3 pm.  I thought the Spin In started at 9:30, so planned to get there about 9:00 am.  I was running late, however, so we didn’t arrive until about 10.  The Visitors Center was busy all day long.  If no other visitors were in our alcove, people tended to stand just outside the alcove and watch, even though there was no barrier to keep them from coming in to get a closer look.  But we invited them in and answered any questions they had about our various crafts.

I had a wonderful time at the Spin In!  I was working on the Cormo that I started while at the Central Florida Fair.  I made decent progress, spinning a couple ounces or so, despite helping Lorelle assemble her wheel, taking a break for lunch, taking breaks to walk around and visit with the other demonstrators, and talking to visitors.

The St. Augustine Textile Arts Guild holds their regular meetings on the 2nd Thursday of the month.  They often hold workshops on non-Guild-meeting Thursdays.  For more information on joining the Guild, the location and time of the Guild meetings, and details on any workshops they have scheduled, visit their Facebook page.  If you do a Google search for the group, you may come across a web page for them.  However, the web page is not current and is not updated.  All the communication for the group goes through Facebook!  While the official Spin In is held only once per year, one or two Guild members often spin at the Visitors Center on Mondays.  They are also discussing the possibility of having another Spin In sometime in the Fall.  If you are in St. Augustine, stop by and see them.  If you are a fiber crafter, you are always welcome to craft in public too!  Perhaps I will see you there (and maybe I’ll even be in costume). 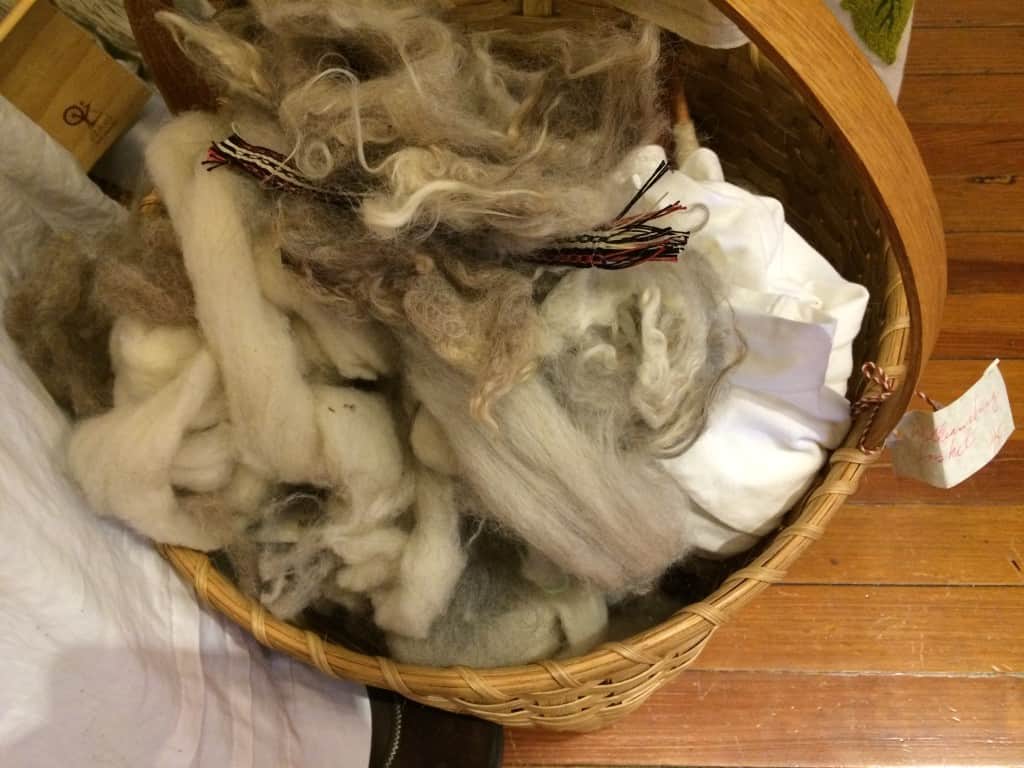 1 thought on “St. Augustine Spin In”