Chris and I have three cats: Puck, Pepper, and Tiger.  We only had two Kitty Pi (Pis?).  Clearly, this needed to change.  The Quidditch World Cup Semifinal Round required knitting a project of at least 300 yards, and the United States is one of the Semifinal teams.  Solution: A Kitty Pi in red, white, and blue.  Easy Peasy. 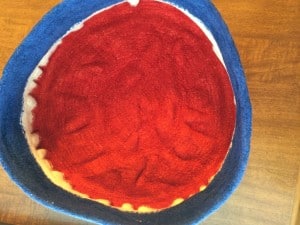 The yarns used in this project were deep stash, purchased back in 2006 or 2007, shortly after I returned to knitting after the post-dislocated-finger hiatus.  100purewool is no longer in business; the 88 yards of Three Irish Girls Galenas Merino was the last of that skein.  I don’t recall what I used the rest of the skein for, and I believe it was a pre-Ravelry Project.  All the yarns are singles, so perfect for felting.  They are also heavy worsted / Aran weight yarns that I’m unlikely to use for anything else.  It feels good to use up deep stash and to find a purpose for yarn that I didn’t think I would use!

Even though this Kitty Pi used 410 yards, it is a super quick knit.  It is called a Kitty Pi because it uses the pi-based increases for knitting in the round, as popularized by Elizabeth Zimmerman’s Pi Shawl.  Aside from the increase rows, this is a knit every round project, on large needles.  I cast on Friday, after the opening whistle for the HPKCHC Quidditch World Cup Semifinals, and finished the knitting part by Saturday evening.  Here’s a couple pictures of it before it was felted: 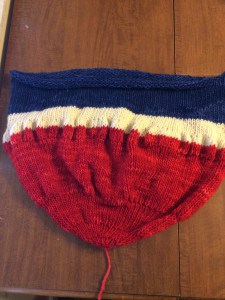 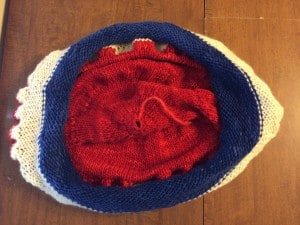 On Sunday, I ran it through the wash twice.  To felt, I put the objects inside a pillowcase, tie the pillowcase closed, toss the pillowcase in the wash with a load of towels, and wash with hot water.  After the first wash, the Kitty Pi was not quite felted enough, so I ran the entire load a second time.  I only had the one load of towels to wash on hot, so the towels went through a second time.  Can’t hurt them, right?

The Kitty Pi was perfectly felted after the second load, so I took it out and stretched it over the base of one of my 20 quart stock pots to dry: 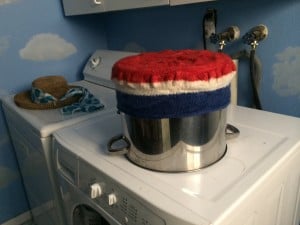 Before I went to bed Sunday night, I took the Kitty Pi off the stock pot and left it to dry the rest of the way sitting by itself.  When I got up Monday morning, it was dry.

This Kitty Pi is supposed to be for Puck.  Pepper got the first Kitty Pi I ever knit and she has totally taken possession of it.  No one else is allowed to sleep in her Kitty Pi.  The second Kitty Pi was meant for Tiger.  It is on Chris’s desk in his home office, in front of the window.  Tiger follows Chris everywhere.  If Chris is in his office, so is Tiger.  Tiger often sits on the desk, looking out the window, so that’s where the Kitty Pi went.  Chris tells me that Tiger and Puck both sleep on that Kitty Pi.

The new Kitty Pi was placed in Puck’s favorite sleeping spot, on the arm between the two reclining seats of our sectional couch.  At first, Puck avoided the Kitty Pi, walking around it and meowing as though there was nowhere for him to sleep.  So I picked him up and put him in the Kitty Pi, so he would know it was his.

Eventually, he did figure it out. 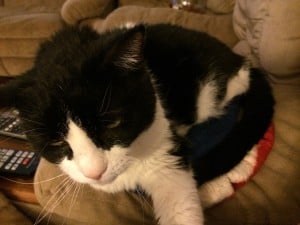 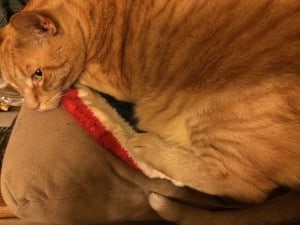 I now have a 1:1 ratio of cats to Kitty Pi (Pis?).  This is probably not the last Kitty Pi I will knit, however.  Each cat has several favorite sleeping spots, and each spot might need a Kitty Pi.  The cats like them because it is a soft place to sleep.  I like them because it keeps the sleeping spot cleaner, accumulating excess hair on the Kitty Pi rather than on my couch or other surface.  It’s also a super-easy, quick, and fun project to knit.  There will be more.  Eventually!