In 2002, Chris and I moved to the Orlando area from the Boston area.  For many years, I complained that we moved to a cultural void.  I missed the theater, author readings, art museums, and other cultural institutions in Boston.  Over the years I learned about Orlando’s cultural institutions, but I wasn’t visiting them.  Between 2007 and 2011, my schedule was insane.  But in the latter half of 2011 the insanity dwindled.  Chris and I were looking for interesting things to do.  I figured it was time to put my money where my mouth was and actually visit some of Orlando’s cultural institutions.  After all, I had no right to complain if I never took advantage of the obvious cultural opportunities Orlando does offer.  One of the first things we did was buy tickets for several of Orlando Shakespeare Theater’s shows.  I adored them all and when they opened up season ticket subscriptions for the next season, we bought them.  We have been season ticket holders ever since. 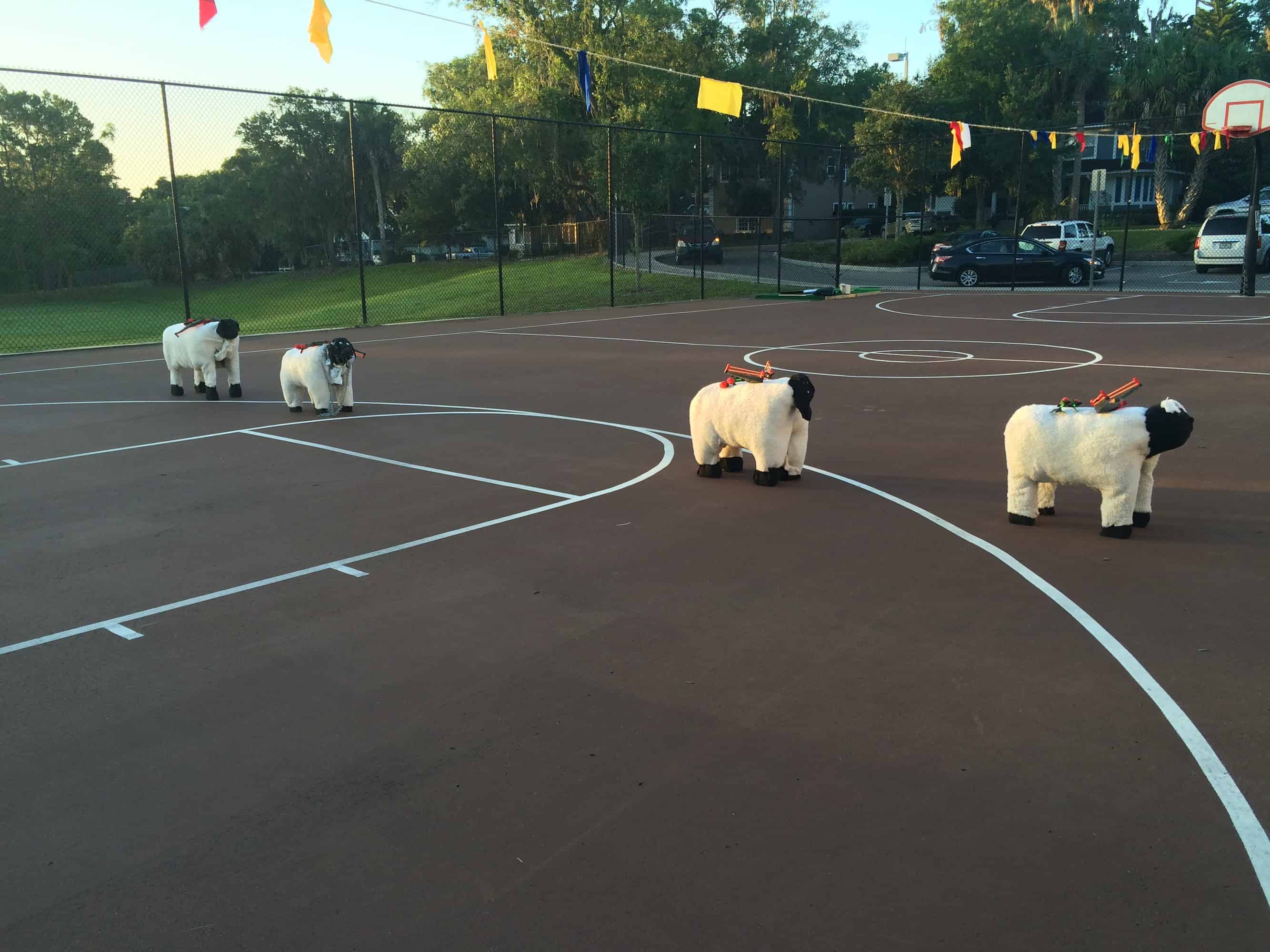 Winter Park High School’s 9th Grade Center holds an annual Shakespeare Festival.  For several years, the Weavers of Orlando have participated in the Festival, doing spinning and weaving demos.  This year, the Festival took place on May 28.  It was my first year participating in the demos.  We were required to wear a period costume!

The English Department organizes the Festival.  In past years, the entire event took place in the gymnasium.  This year, they tried something new.  The event took place in the English Building and the auditorium.  In the English Building, different classrooms had different themes.  The Weavers of Orlando, for example, was in a room with a pottery booth and a face-painting booth, for an artisan theme.

In our room, a student could potentially get 3 stamps: one for getting their face painting, one for signing the large pot on the pottery table, and one for either listening to us explain the process of getting from raw fleece to finish fabric or for weaving on the floor loom.  Other rooms had games, palm reading, and much more.  During their Geography period, students went to the auditorium to see the performances.  Some study skills teachers also allowed students to come to the Festival instead of their usual study skills period.

In order to participate in the event, students were required to wear a costume.  This requirement was loosely interpreted.  Some students rented or purchased costumes.  Some made the costumes as part of a class prior to the event.  Others used their ingenuity and their existing wardrobe to create a character.  I overheard more than one student ask another about their character.  I extrapolated from this that the students had studied Renaissance social roles and were to pick a particular role for their costume.

Since I was demonstrating, I didn’t get a chance to walk around and see the other rooms.  When I first arrived (at 6:30 am!), someone was setting up games outside, including archery.  I was amused to see the fake sheep used as rests for the bows and “arrows.” 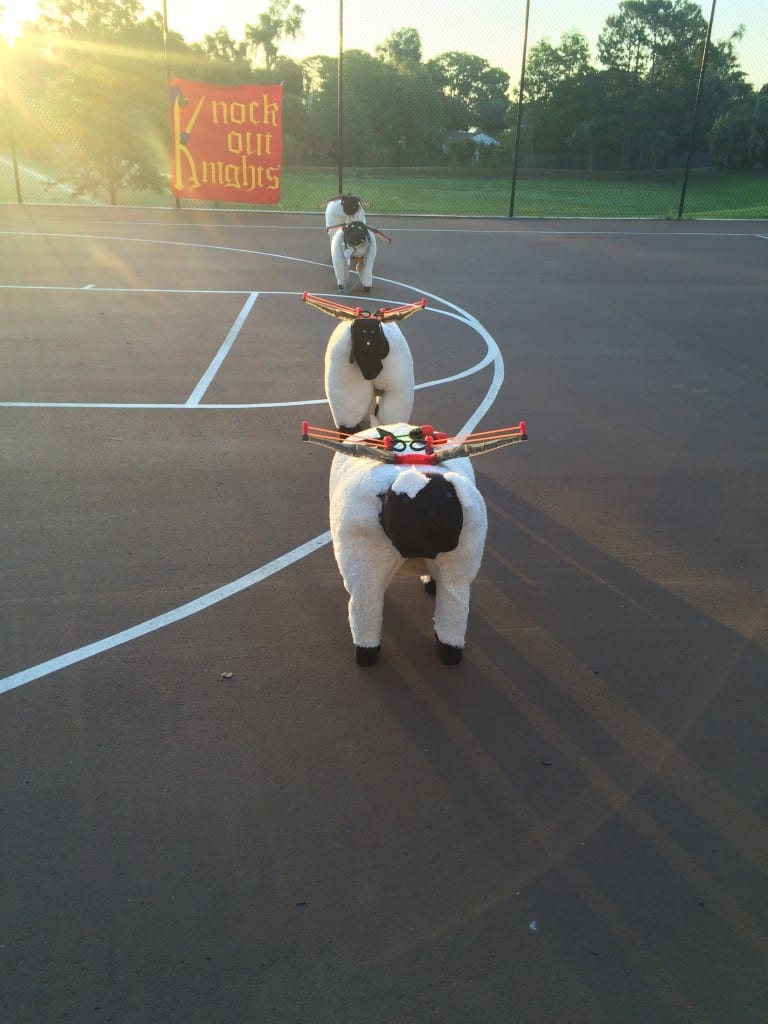 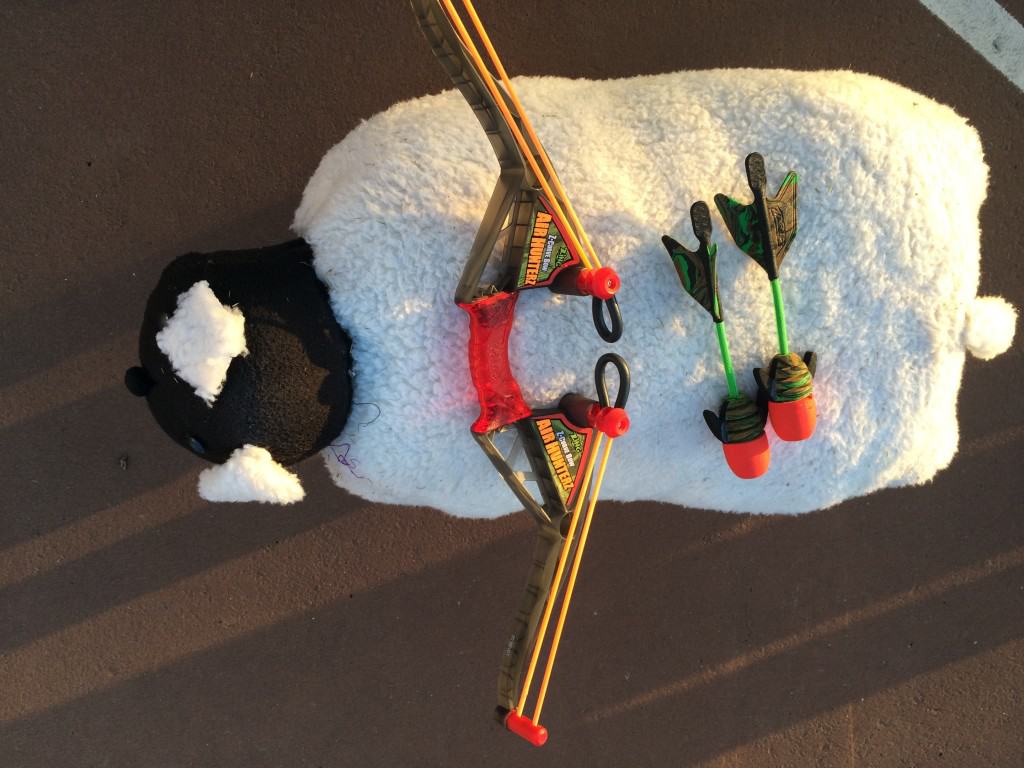 One room was the King’s Court.  Students could fence with Nerf swords, for the King’s amusement and approval. 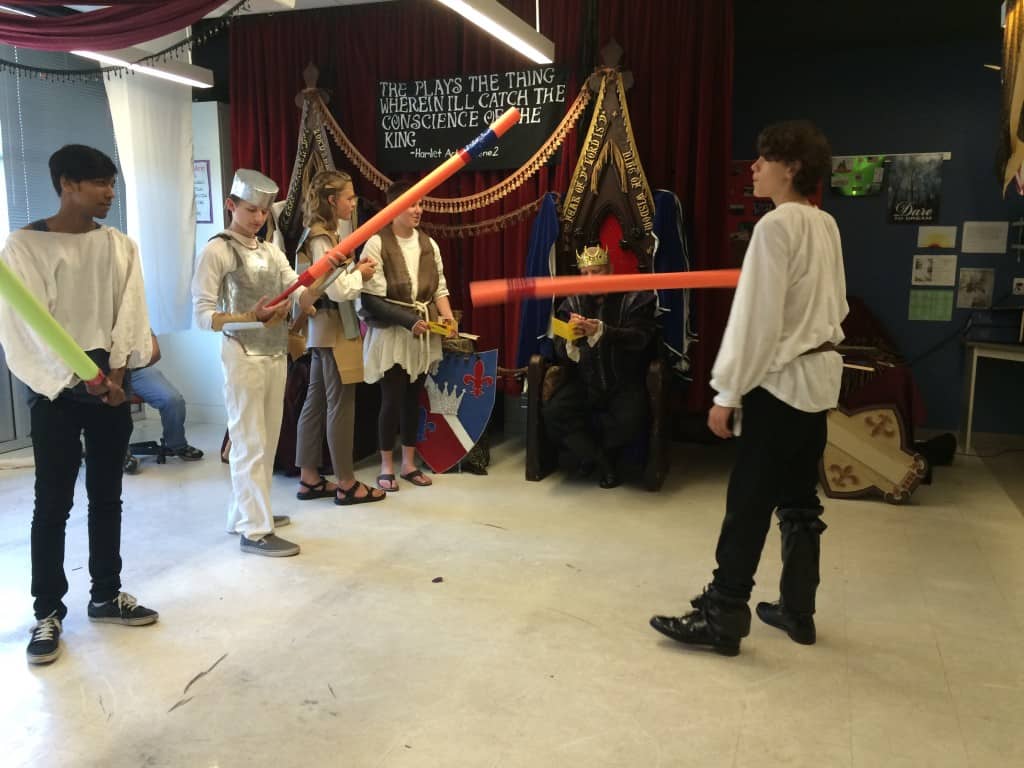 At lunch, I ran into the royal family.  The King and Queen are a real-life husband and wife.  The girl in the Beefeater costume is their daughter.  She was a 9th grader in this school last year, and the parents volunteered as King and Queen.  The family reprised their roles for this year’s festival. 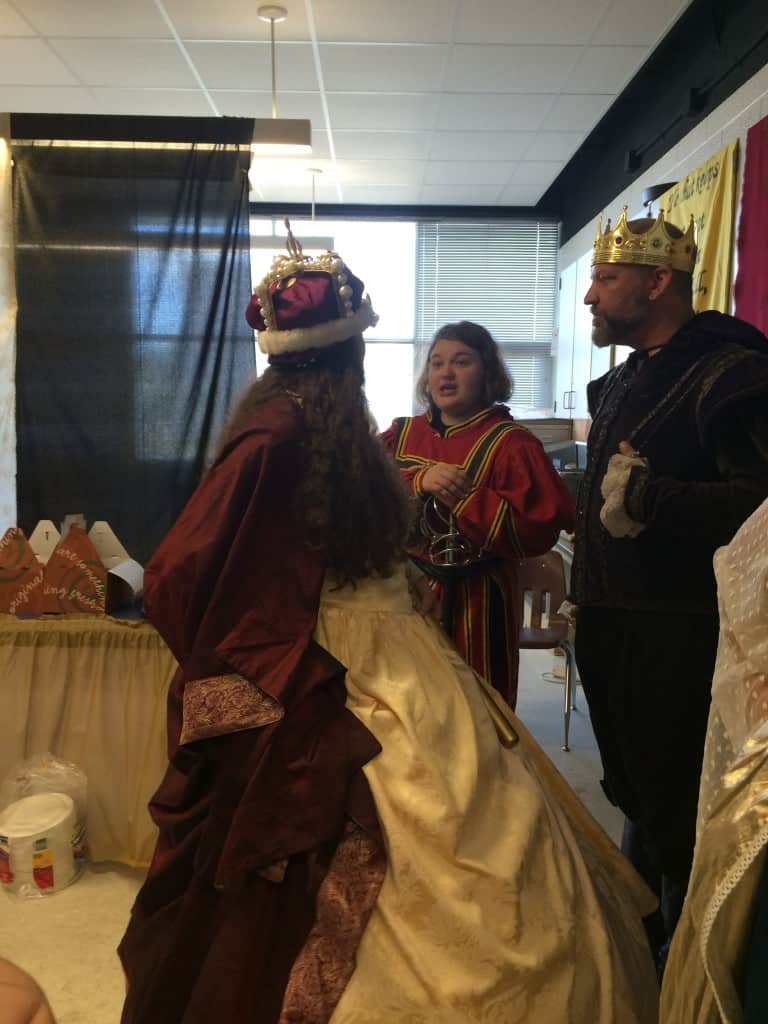 I loved this Blackbird Pie sculpture on the lunch table. 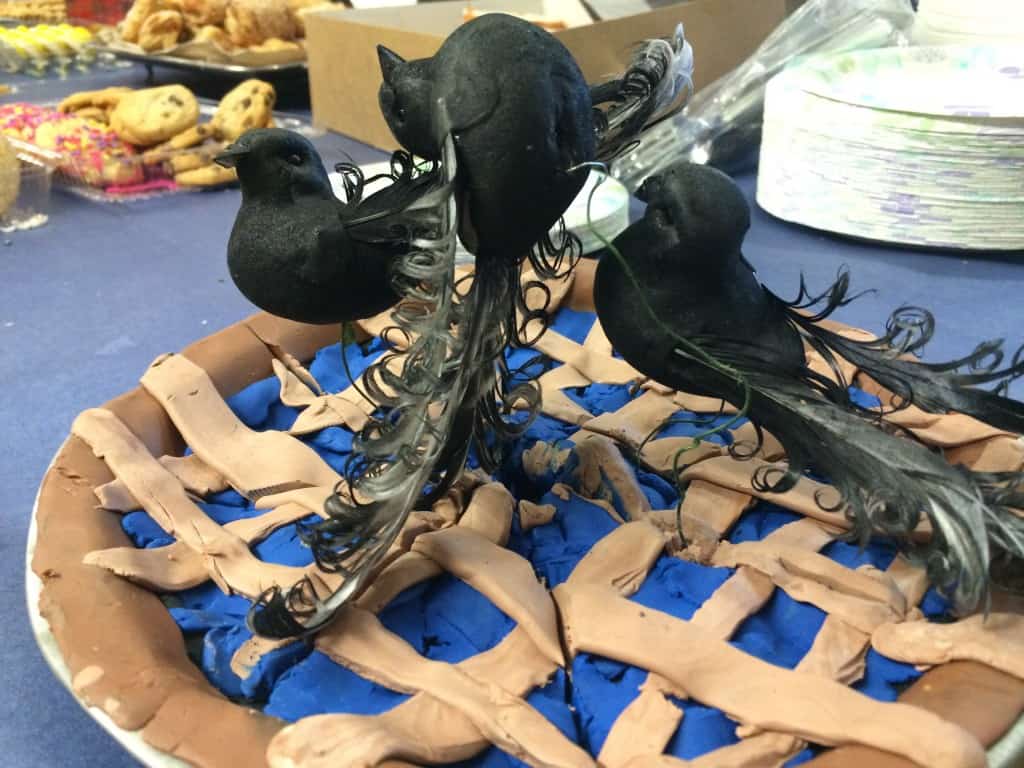 I’m not sure how many students we had come through our booth.  We weren’t doing the Kumihimo disks or any other takeaway at this demo, and that’s usually how we know the number of students.  We had a steady stream of students throughout the day, without ever being inundated.  We were at the event from 6:30 am to 2:30ish pm, including the set up and take down time.  I spun about an ounce of Cormo during the event! 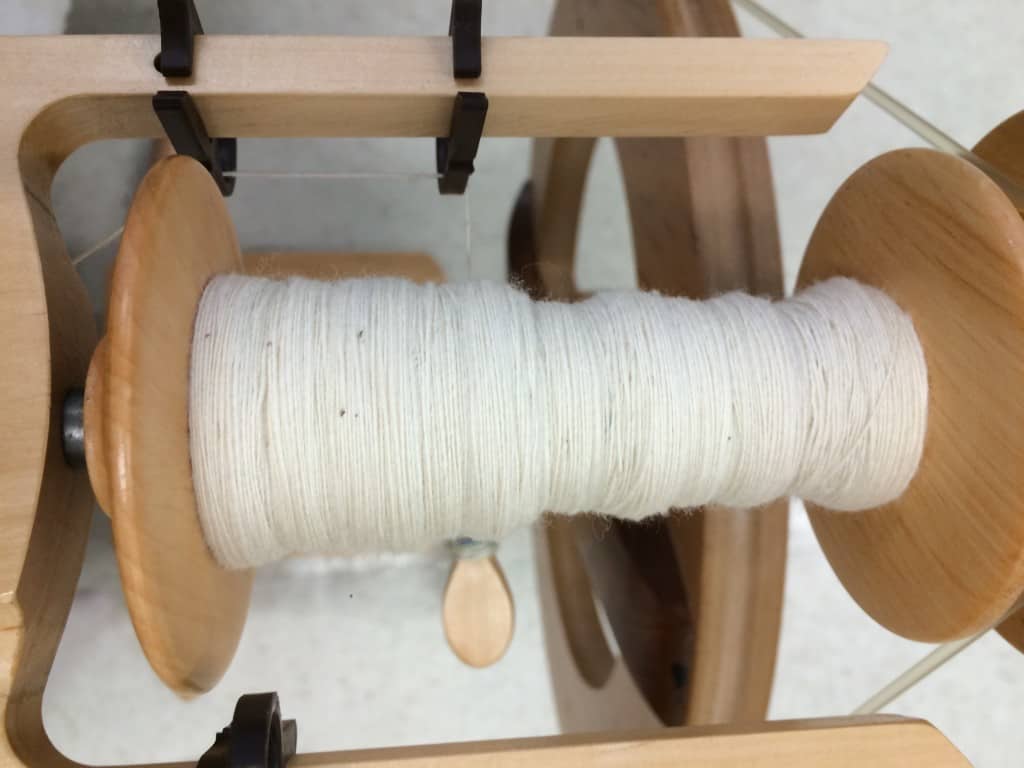 I expected to be exhausted after this event.  I was up far earlier than usual and it’s a lot of talking.  I was tired, but not as tired as I expected, and I had a lot of fun.  Hopefully, I’ll be able to do it again next year!