I finished two monsters, which I turned in for HPKCHC Quidditch Round 2.  Here’s the Official Stats: 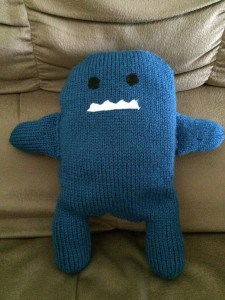 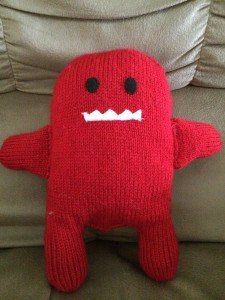 I have made this pattern two or three times before these two.  I found that the Vanna’s Choice yarn is a little short on yardage to complete the pattern as written, so I make a few modifications.  I use 24 stitches rather than 30 stitches for the legs, then increase 12 stitches in the first body round so that I have the right number of stitches for the body.  I knit 6 – 10 fewer body rounds before starting the decreases at the head.  I knit the arms as long as I can without running out of yarn.  This is usually 8 – 10 rounds shorter than the pattern suggest.

When I made the Sapphire Hugo I forgot to increase 12 stitches in the first body round.  I did not realize it until I got to the decreases.  By that time, I did not want to frog all the way back, so I went ahead and finished.  I did more rounds of double-decrease rounds so that the head would have enough shaping.  I ended up with about 40 yards of leftover yarn.

I decided to make the Scarlet Hugo using the same modifications that I used for Sapphire Hugo.  I hoped that doing so would give me enough leftover yarn to make a third, stripy Hugo.  I have about 40 yards of leftover yarn from the Scarlet Hugo.  This leaves me with only 80 yards of yarn, so 60 yards short of enough to make a third Hugo with the same modifications.  I believe I have some purple Dark Fantasy Yarn that I can use to make up the difference.

I turned these projects in for Quidditch, and took pictures of each Hugo pointing to the country it is representing: 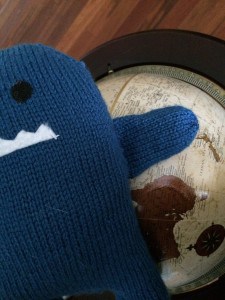 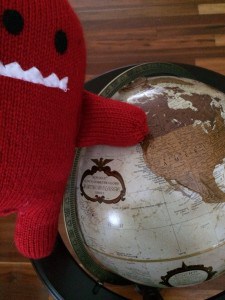 I’m hoping I will get some bonus points for these pictures!