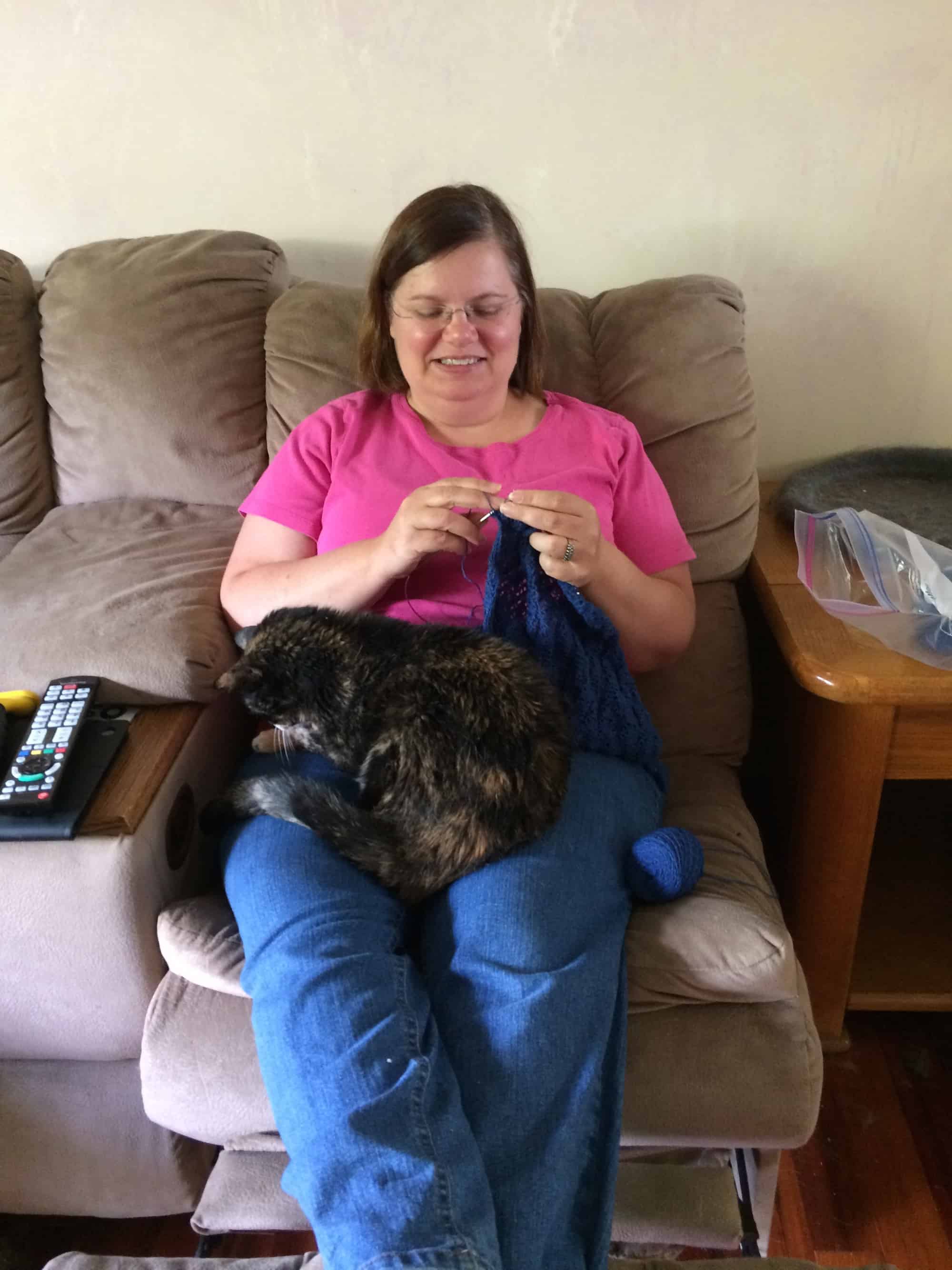 Today’s prompt is to write about my crafting time and space.  I realized that every time I attend a special fiber-related event, I write an entire post on this blog.  Sometimes I mention going to my regular spinning or knitting group, but I’ve never written posts about the various groups I attend or my day-to-day crafting experience!

When I craft at home, it is almost always in my living room, while watching tv.  If I’m knitting or crocheting, I sit on the couch, and there’s almost always a cat in my lap. 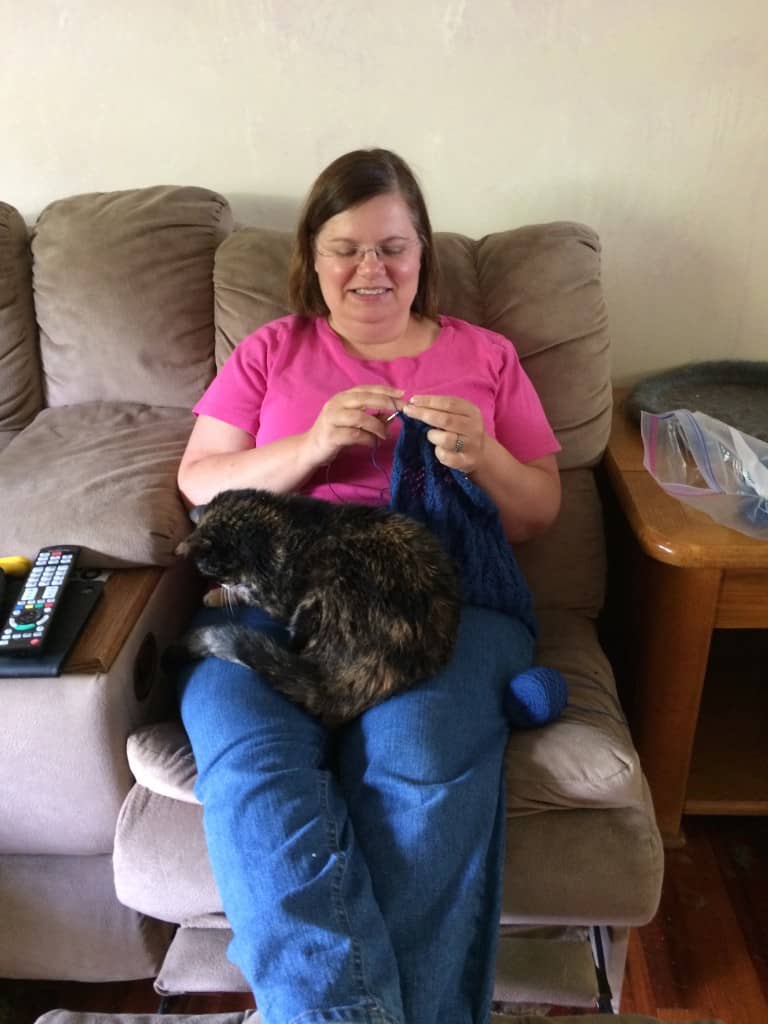 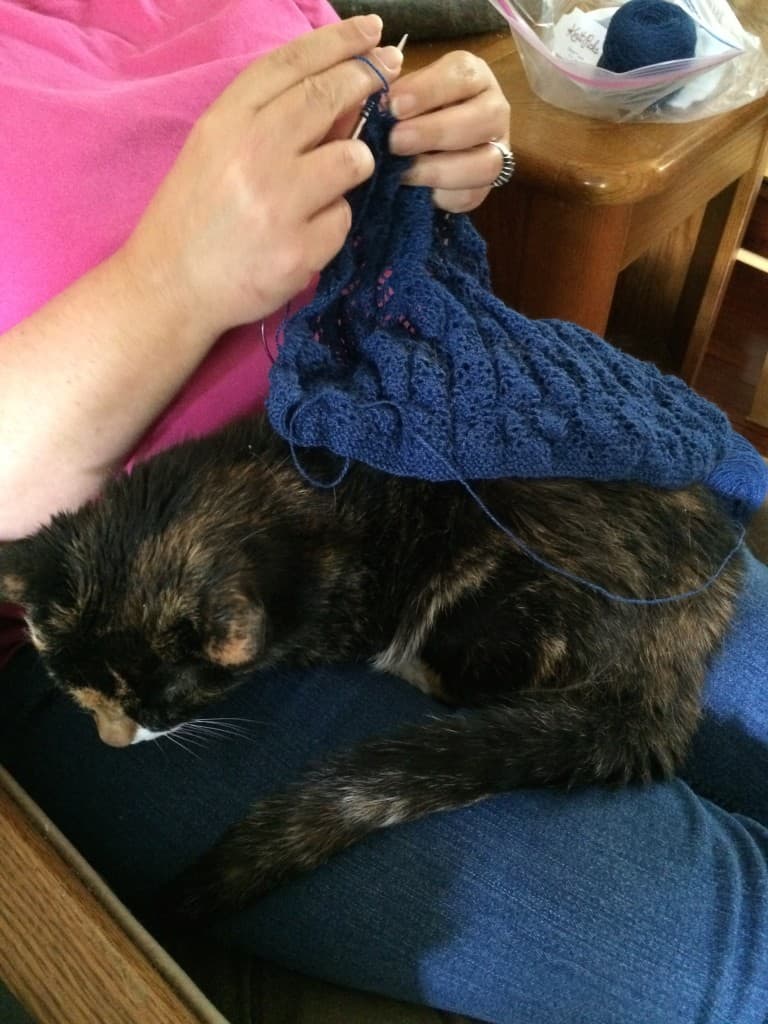 If I am spinning or weaving, I can’t sit on the couch because it is too low and I can’t sit all the way back.  Instead, I grab a “kitchen” chair and sit in that while I spin or weave.  “Kitchen” is in quotes because these chairs are part of a table & chairs set that I bought for maybe $60 many years ago (at least 20), but they are no longer used in the kitchen.  The table is an extension of my desk and the chairs are totally beat up because of the cats.  The chairs float around the house, pressed into service as cat beds, cat stair steps (so poor arthritic Pepper can get to her favorite sleep spots), step stools for me, etc. 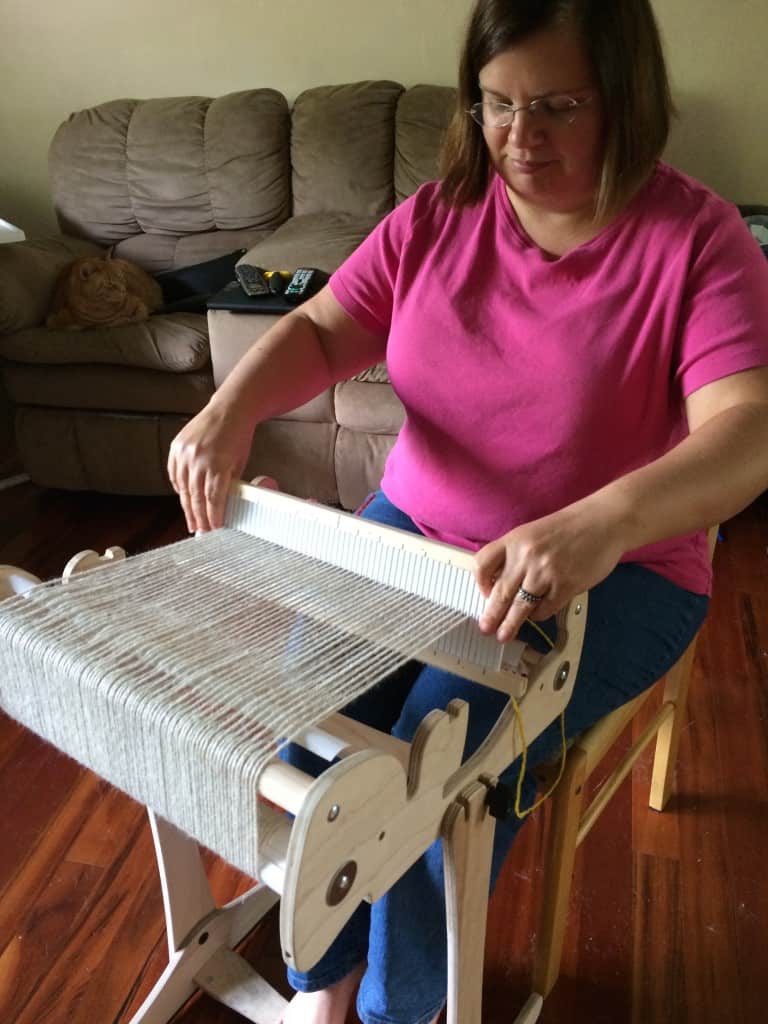 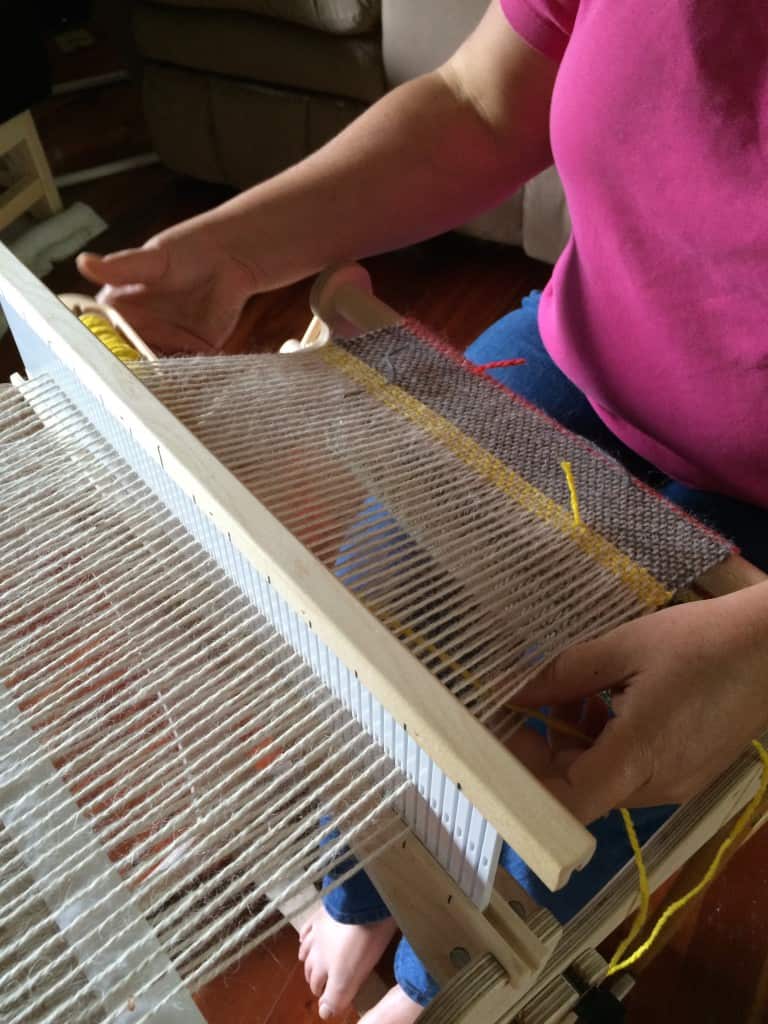 Since I’ve traveled so much the last few years, travel knitting is a regular part of my crafting time.  If I’m on a plane, I am almost always knitting.  If I’m a passenger in a car, and we are traveling a distance, I’m knitting.

I regularly attend 3 groups that meet monthly as well as one weekly group.  I’m thinking of adding a fourth monthly group; they used to meet on Wednesdays, conflicting with my regular weekly group, but they moved their meetings to the second Saturday of the month.  I haven’t been home on the second Saturday since they changed the meeting.  I’m planning to attend that group in June and see if I can make it a regular part of my schedule.

The weekly group meets from whenever people arrive until 8 pm at my local yarn store (LYS), Knit!, located 3 miles from my house.  I’ve lived close to Knit! for 12 years, and ever since I picked up my knitting in 2006 after a hiatus of several years, it’s been my LYS.  Marney’s had knitting nights before, usually during the fall and winter, but I’ve never attended because of my schedule.  Last fall, she started up knit nights again and I plan to go every week, though of course I don’t always make it.  Most Wednesdays, there’s at least 6 or 8 people there.  On busy evenings, there’s been as many as 20 and no room to walk in the shop.  On the occasional slow night, there’s 3 people there.  I am excited that Marney decided to continue the knit nights through the summer this year!

Drunken Monkey is a coffee shop in Orlando.  The spinning group meets on the first Saturday of the month from 8 am to 11ish am.  Most months, we have at least 8 people in attendance.  The most we’ve had is about 12, counting the 5-year old son of the group’s finder and the non-fiber-crafting husband of one member.  I joined this group in June last year, a few weeks after I got my spinning wheel.  I always bring my wheel because I can’t spindle spin!  Other members bring wheels or spindles or knitting or crocheting and we spend a lovely morning chatting over fiber.  Other coffee-house guests often stop and ask what we are doing, and we explain to them a little about how spinning works.  If you are ever in Orlando on the first Saturday of the month, you are welcome to join us! 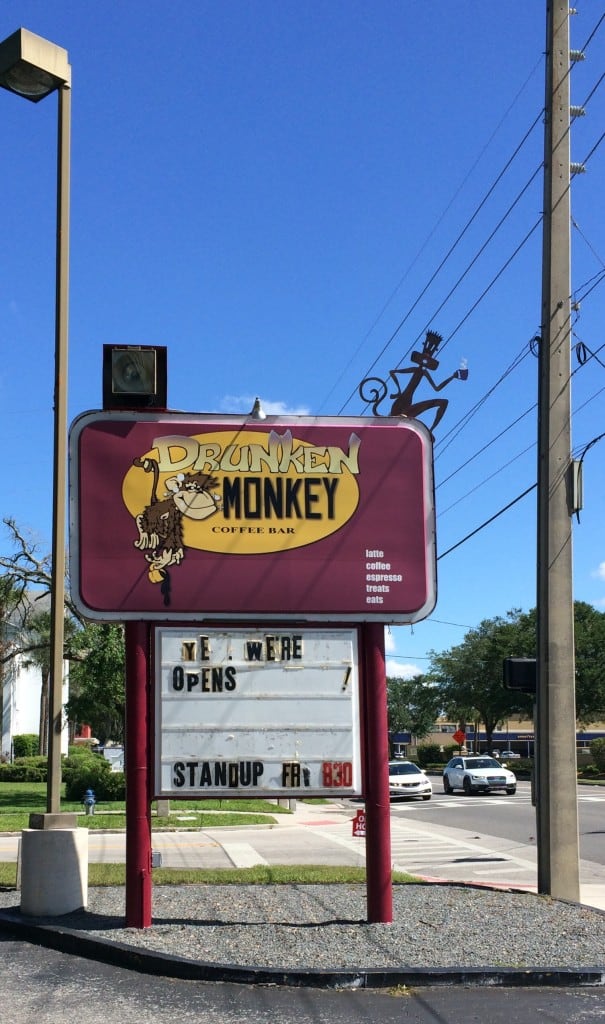 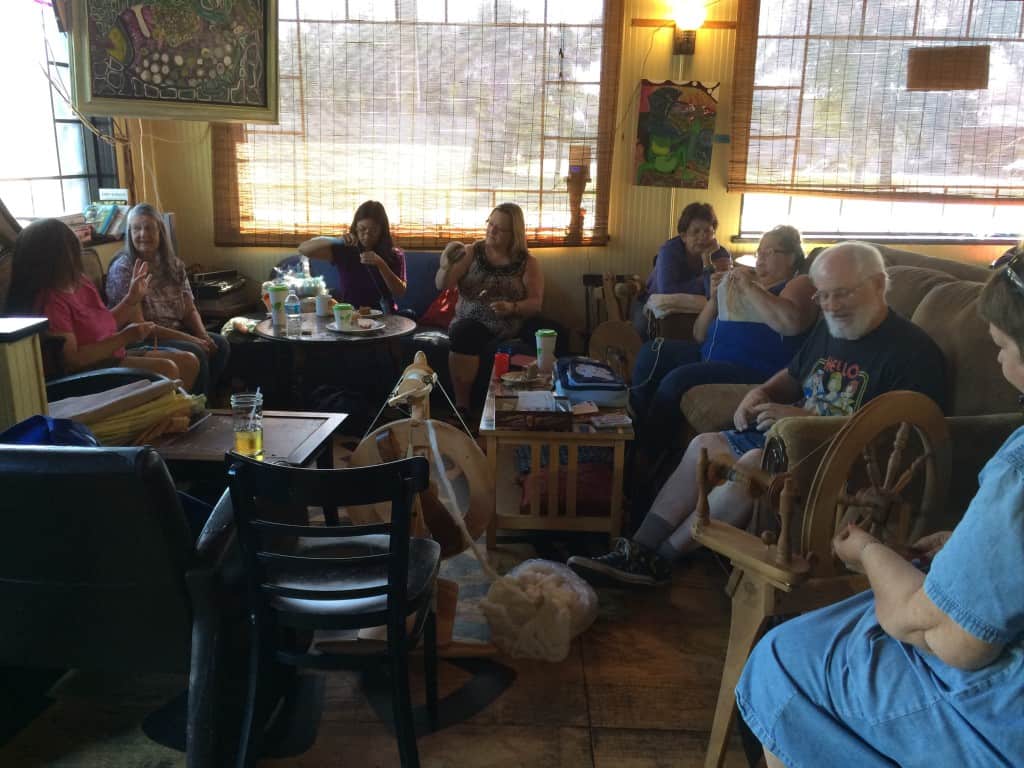 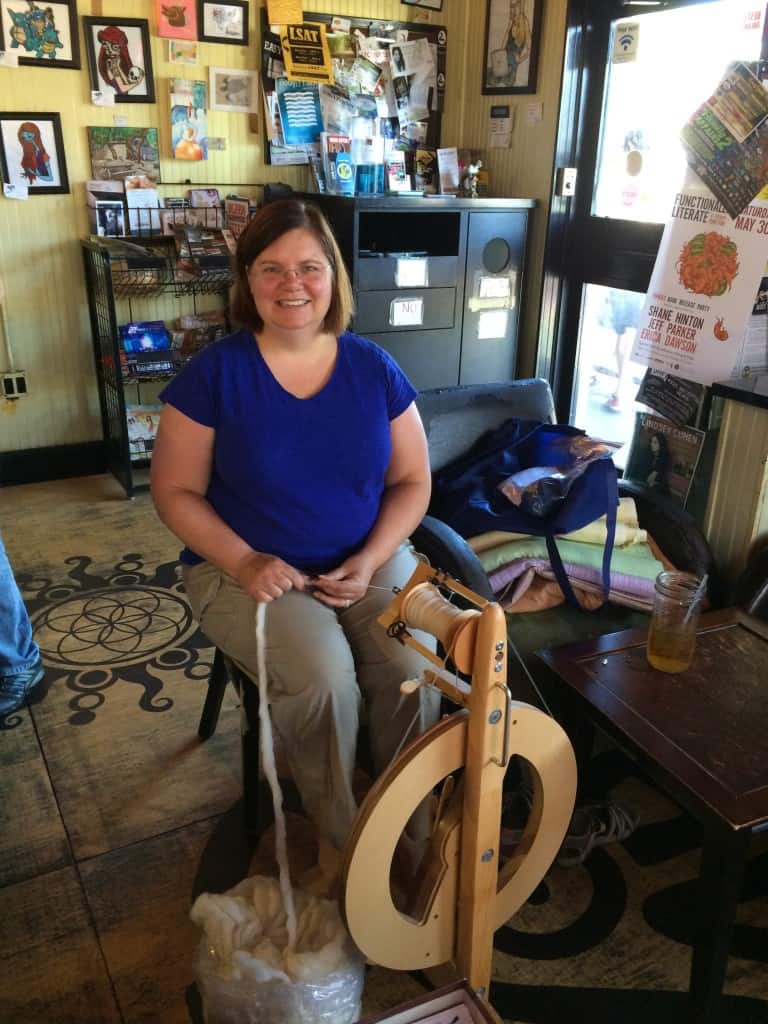 The Weavers of Orlando guild meets on the 3rd Saturday of the month in Winter Park, Florida from 10 am until noonish.  Sometimes there’s also presentations in the early afternoon.  The Weavers of Orlando has about 100 members and most meetings have 40 to 50 people in attendance.  Visitors are always welcome at these meetings, if you find yourself in the Orlando area on the 3rd Saturday of the month.

The area I live in is called Wekiva, after the nearby river.  One of the librarians at the local branch organizes Wekiva Knitters; the group meets at that branch on the 3rd Saturday of the month, 1 pm to 3 pm.  Since the library is a polling station, including for early voting, during elections the group is cancelled or rescheduled.  The attendance varies dramatically from one month to the next.  Sometimes there’s only one or two people there.  The largest group I’ve ever personally seen is about 10.  My own attendance at this group is erratic.  I first went in August of 2012, then didn’t make it there again until June 2013 due to travel and other obligations.  I really enjoy this group, though, and try to get there as often as I can.  It’s only a mile from my house (shorter, as the crow flies), so if I’m home there’s no excuse for missing it!