My birthday was several days ago.  We got home from New Jersey only a few days before that.  I was tired and needed to get back into a rhythm at home.  I decided the best gift I could give myself for my birthday was progress on personal projects.  I made progress on three projects: (1) Finishing a loom and spinning wheel; (2) Scouring fleece; and (3) Spinning a batt.

In early January, I wrote about the problems I have with the finish on my rigid heddle loom and my spinning group’s wheel.  My mother-in-law passed away the day after I wrote that post.  When we left for New Jersey, I left all the pieces out on the workbench.  I was at a bit of a loss of how to proceed because after five passes with the mineral spirits, some of the pieces were still tacky.  On my birthday, I took the loom and the treadles to our local Woodcraft store and explained what I had done so far.  They said I probably put too much Danish Oil on, which is why it never dried.  They said that continuing with the mineral spirits was the correct approach but that if that doesn’t work then I will have to remove the entire finish and start over.  I was using paper towels to apply the mineral spirits.  They suggested that I use a shop towel because the paper towel might be too smooth.  Over the course of the last several days, I applied another 5 or 6 rounds of mineral spirits.  Some of the pieces are no longer tacky, some have parts that are tacky and some that are not, and some are still tacky all over but are not as tacky as they were before.  We continue to move in the right direction!

In early January, I scoured some fleece and wrote a long post about it.  That day, I only scoured a fraction of the fleece I needed to scour.

The day my mother-in-law died, I was at a friend’s house, about to scour more fleece.  My spinning group was holding our third annual retreat (I posted about the first one).  This year, we decided to spend the day at the home of one of our members.  These retreats are usually low-key, bring a project and do your own thing affairs, but this year several of us had fleece to scour, others had never scoured and wanted to learn, and our hostess has excellent space for scouring, so we decided to do a scouring day.  I brought all the fleece I needed to scour and all my equipment.

Since several of us were processing fleece and since I had several 4 – 16 ounce samples, I put all my fleece into mesh laundry bags.  Inside each laundry bag, I wrote the name of the breed on a tyvek wrist band (Amazon affiliate link).  I used these wristbands when dyeing and scouring because they will not dissolve in water and you can write on them with a Sharpie.  I had just finished putting everything into bags and was about to start scouring when my husband called to tell me his mother had passed.  I immediately packed up all my fleece and drove home, leaving my equipment behind since everyone else was using it.  I picked up the equipment after we returned home.

I still wanted to get all that fleece, plus additional fleece I had at my house, scoured.  So I spent the afternoon of my birthday scouring fleece.  Here’s all the fleece I put into laundry bags while with my spinning group. 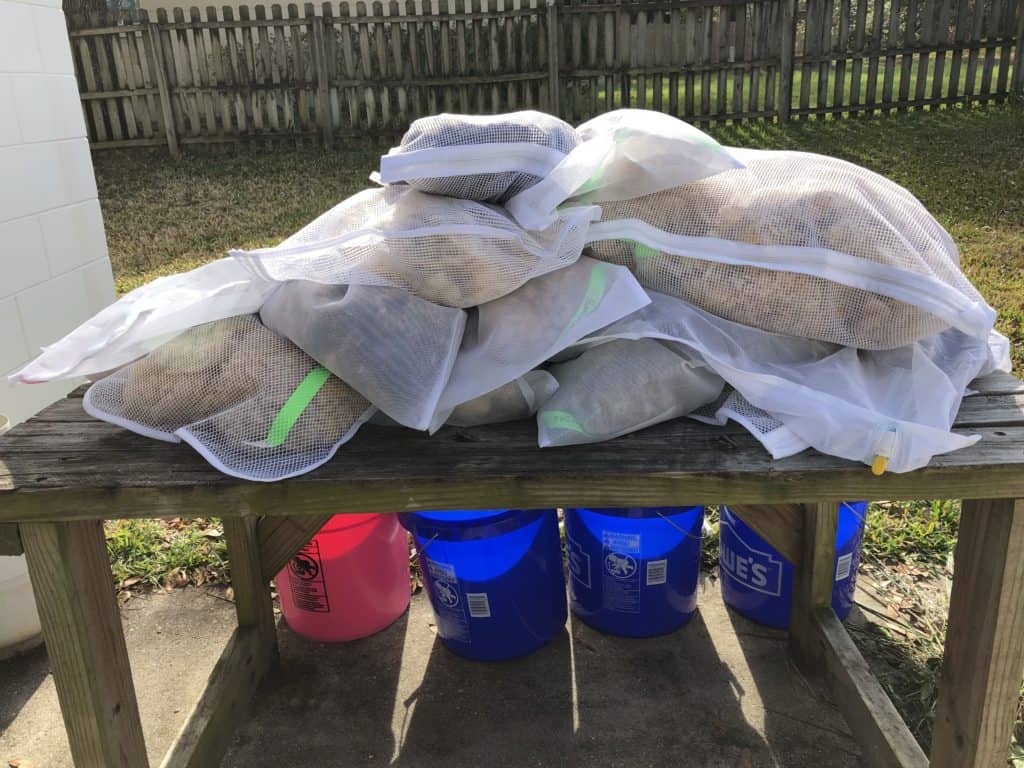 My friend Nancy told us that she and her sister now do cold soaks of fleece before scouring.  I decided that I would try that method.  We have a plethora of 5 gallon pails.  We use them for putting water into our hydroponics system, for toting around tools, and for storing things in the garage.  Last September, we bought several more to use for water storage as part of our Hurricane Irma preparations.

Copious water storage was an excellent thing because we were without power for 6 days, without water for 24 hours due to a water main break on our street, and on severe water restrictions (no showers, no flushing the toilet if you only peed) for a week because 85% of the lift stations in our county were without power.  Lift stations move waste through the pipes to the treatment facility.  If they can’t do their job, somewhere that sewage will seep into someone’s home.

Sorry about the tangent.  As I was saying, we have a plethora of 5 gallon buckets.  I used those for the cold water soak.

I liked the cold water presoak a lot.  It is amazing how much comes out of the fleece, simply soaking it in cold water.  I put the fleece into the pails to presoak, then finished setting up the rest of the equipment for scouring.  When I took the fleeces out of presoak and put them into scour, I dumped the water out, filled the pail with clean water, and put more fleece in to soak.  All the fleeces were in the cold water for a minimum of 20 minutes.  Some were in there for an hour or more while I scoured others.  With cold water, I don’t have to worry about the water cooling and lanolin redepositing onto the fleece.  Anything that came out with just cool water should stay out!

I did only one scour with detergent on most of the fleece, followed by two plain water rinses.  This was effective for almost all the fleeces.  One particularly dirty alpaca fleece got two rounds with detergent and three plain water rinses.  One or two of the greasier fleeces needed more scouring and I will be doing another scour on them.  Stay tuned for more detailed blog posts on which ones needed more scouring and how I handled that.

I made one other change to the process I described in my previous post on scouring.  I added two more bins for scouring, so I had 6 going at one time.  When I was at the spinning group retreat, I discovered that my dish pans hold the same volume of water as the other containers I was using for scouring, so I set up two dish pans plus the containers! 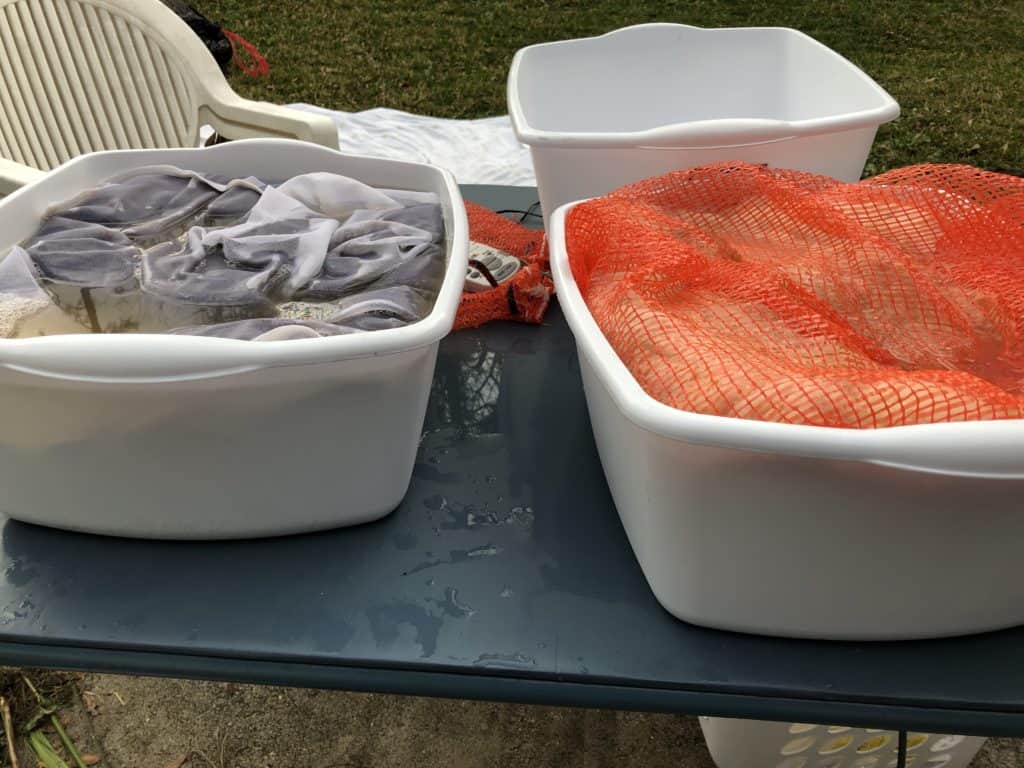 With six bins going and the presoak doing a lot of work before scouring, I was able to scour 19.5 pounds of fleece in 4 hours.  I have one fleece left to scour, an 8.5 pound black Corriedale fleece that I intend to scour a lock at a time using Fels-naptha soap.  Stay tuned for a blog post on that when I get it done.

My birthday was the day that NBC broadcast the opening ceremonies of the Olympics, so my parents came over and we watched that while I spun.  I worked on the SassyBee polwarth batt I’ve been spinning for a bit. 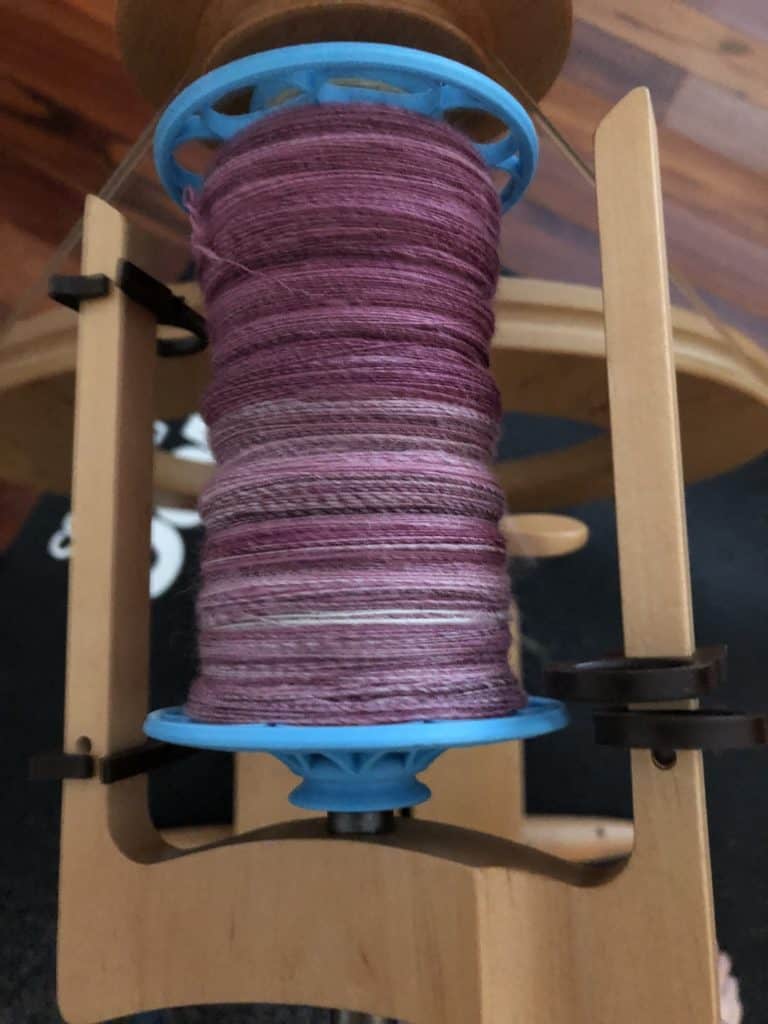 It was an awesome birthday!

My parents wanted to spend a day with me and told me to pick what I’d like to do and that would be their gift.  The Tuesday after my birthday, we played an awesome escape game at Escape Effect 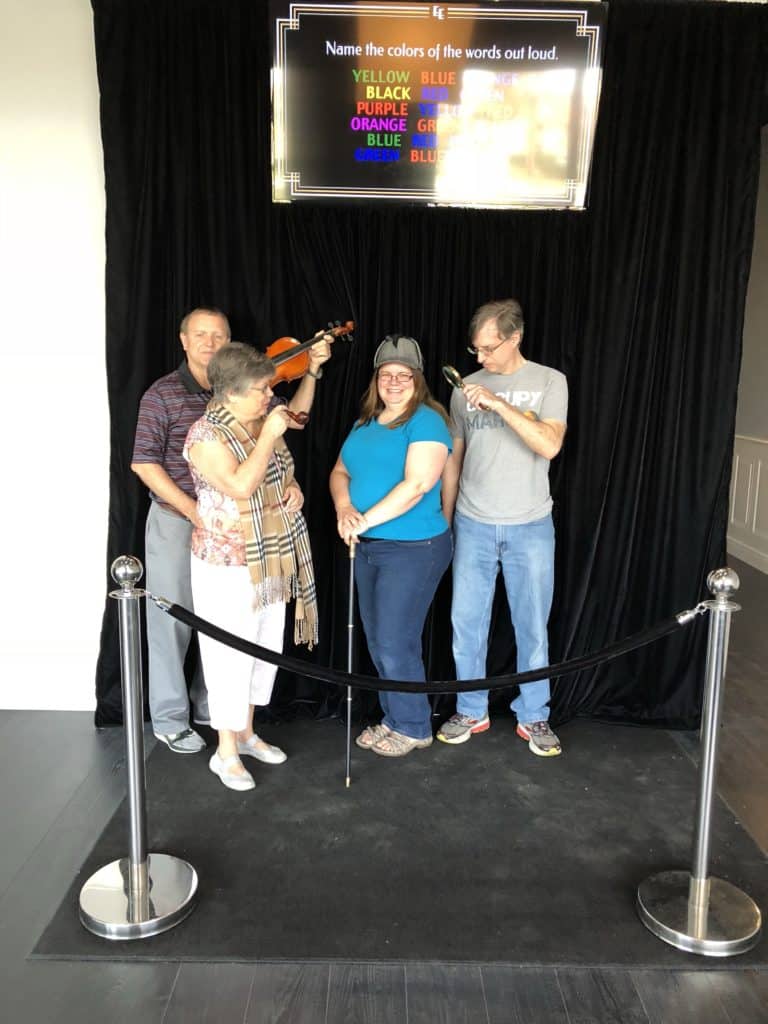 We had fabulous Indian food at a restaurant in the same plaza, then we went next door to Escape Effect and took the museum tour at the Chocolate Museum and Cafe.